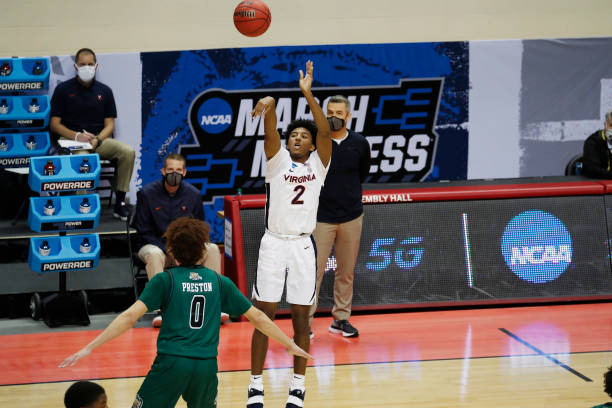 Last week CBB Review voted on its top 25 teams heading into next season. These players will be big in helping these teams stay on the path of being ranked.

Note: Since CBB Review offered its previous rankings, there have been decisions from Alonzo Verge, Cedric Russell, Kevin Obanor, Kofi Cockburn and Marcus Carr. All of those players could be on potential top 25 teams, so these rankings will likely shift again before the season starts.

For now, the following are the 25 teams we had ranked before those decisions. Also, as mentioned above, transfers may affect rankings, but all players listed are key returning players.

Agbaji was the most distinctive Jayhawk to come back, after deciding his senior season may offer more than the NBA Draft. He’s been a consistent starter over the last two years, with 16 starts his freshman season. Agbaji will bring back a blend of scoring and on-ball defense and might be the best two-way player in the Big 12 next season.

This one’s not even close as Timme would be on the shortlist of the best players in the country returning to college in general. He averaged 19.0 points and 7.0 rebounds per game last season which helped him win the Karl Malone Award given to the nation’s top power forward. Timme will be the key factor in the Zags’ run at its’ coveted first title.

You can’t go wrong here with Gillespie and Jermaine Samuels both returning the Nova. However, anytime you bring a senior point guard back (thanks COVID-19 rules) it’s worth mentioning. Gillespie has some of the best pace of play in college basketball and gives the Wildcats some counted on scoring.

Juzang is practically the reason the Bruins are ranked this high. They still would be a top 25 team after the Final Four run, but Juzang’s decision to return to college was one of the most important, given he could’ve been a low to mid-second round pick.

Texas returning Andrew Jones and Courtney Ramey is big because it brings needed stability at guard for a team bringing in a lot of talented transfers. They’ll help in the Longhorns being able to gel. Jones in particular is the better scorer of the two and is an underrated defender at times. 14.6 points and 1.0 steals per game last season will bring Jones into a SIXTH year senior. Nothing but respect for the cancer survivor.

Purdue was that strange team that didn’t necessarily have any players who were real threats to leave for the NBA, yet have two notable returning seniors in Williams and Sasha Stefanovic. Williams is the better player and was already one of the top big men in the Big Ten last season. This year, he’ll anchor a group with Final Four hopes.

Like Juzang, Dickinson’s announcement about coming back to Michigan was some of the most important news this offseason. He averaged 14.1 points and 7.4 rebounds as a freshman and those numbers will likely climb to as much as 20/10. The Wolverines are in good hands with Dickinson coming back.

There’s not much to choose from here, with Davion Mitchell, Jared Butler and MaCio Teague all embarking on professional careers. Flagler was the most consistent fourth option during the Bears’ title run, so bringing him back for his senior year is key in lightening the expected drop in success. He’s also a guard, so even though Matthew Mayer is a big return, Flagler will hold the much-needed role of tempo and experience in the backcourt.

The Ducks will once again be a competitor in the Pac-12, which is only getting better. Richardson is a steady scorer and great ball mover who will be in charge of replacing Chris Duarte. He’ll have help on a revamped Ducks team through the transfer portal, but retaining Richardson is arguably the most important offseason move.

One might be tempted to name Davion Mintz here, as he’ll be coming back for a sixth and final season of eligibility. However, Brooks had an unsung sophomore year that saw his averages double and triple almost everywhere across the board. Watch for Brooks to be an even bigger piece of the Wildcats this season and don’t be surprised if it results in an all-SEC team nod.

The Blue Devils constantly have roster changes, making it a challenge to really ever have consistent juniors and seniors. Moore breaks that pattern as he returns for his third season in Durham. The 6-foot-5 Moore can play multiple positions and makes positive impacts in nearly every aspect of the game. This Duke team doesn’t have as much talent on paper, but in Mike Krzyzewski’s final season as coach, anything can happen. For the best outcome, Moore must be an even bigger leader.

Part of me really thought Love was going to head in the direction of the NBA. In year one, Love averaged 10.5 points, 3.6 assists and 1.2 steals, which was certainly good enough to get him a few looks. However, he opted to come back. Look for Love to be on the all-ACC First Team by the season’s end.

Sasser was as big as anyone in Houston’s run to the Final Four. The Cougars bring back the talented scorer and overwhelming defender to another team that looks built for an NCAA Tournament run. There’s no doubt Houston can compete on the national stage so bringing someone like Sasser back to the equation is key in continuing this recent success.

Arkansas loaded up on transfers this summer and Notate is a former transfer himself but played last season with the Razorbacks. Any time you can return a scoring guard who plays tough on the boards, it’s a great thing to have. Notae will be that for this Razorbacks team that could threaten for an SEC Championship.

Two good options here: Eric Ayala and Donta Scott. Ayala is the popular pick given he good very well score close to 20 points per game after topping 15 last season. However, Scott is my pick because of the improvements he made in year two and the NBA value he offers. He easily could’ve tried going professional this year, but chose to return to College Park.

How loaded is the Big Ten? Between Cockburn, Dickinson, Liddell and Indiana’s Trayce Jackson-Davis, one conference might have four of the top ten big men in the country. Liddell is an undersized big man who had one of the best jumps in production in 2020-21. It’ll be hard for him to improve on that drastic of a scale again, but there’s no reason why he can’t average a solid 18/8. The Buckeyes should be rejoicing about having him back.

With Jaden Shackelford still not sure where he’ll play college basketball next season, it means Quinerly is the only double-digit scorer returning from last season. This Crimson Tide team is more so based on an impressive incoming class, but Quinerly’s no slouch. He’s a guard that’s always had an NBA-game, but hasn’t always proved he’s ready for it. One final year in college could be it, and Alabama’s got to be happy he’s sticking with them.

This isn’t about Polite’s scoring abilities, although it is always nice to get a guy back who averaged 10.1 points the season before. Polite’s real impact comes on the defensive side of the ball, where he forced 1.4 turnovers per game in 2020-21. The Noles are a defensive-minded team, so having an experienced defender like Polite is key.

Kihei Clark is Virginia’s best returnee but Reece Beekman has the potential to explode his sophomore season. Averages of 4.7 points, 3.0 assists and 2.8 rebounds won’t jump off the page, but the way Beekman ended the season shows how much those numbers could grow in year two. He became a much more consistent passer and started taking more shots consistently. I’m not forecasting Beekman to become a 20 point scorer every night, but a 10/5/5 line wouldn’t surprise me.

Allen Flanigan and Jaylin Williams both averaged just a few points per game before becoming major scorers for the Tigers last season. However, Flanigan’s 6-foot-6 frame and ability to play positions 1-3 make him stand out as the more important returning player. He’ll likely lead Auburn in scoring next season.

Inside the paint, Osunniyi was a problem averaging 10.7 points per game. However, he offers far more on the defensive side, winning the award for the Atlantic 10 Defensive Player of the Year last season. He blocked nearly three shots per game, but it’s his 6-foot-10 athletic frame that makes it tough to score over him. Kyle Lofton also returned, as did most of the Bonnies’ entire team, but Osunniyi’s impact is often felt the most.

Jackson-Davis was one of the biggest surprises his freshman year. Somehow his sophomore year was drastically better. Now, the challenge will be for him to get the Hoosiers into the NCAA Tournament with ease. There’s no question he’s one of the best returning players in college basketball, but can it result in winning?

With Etienne announcing his decision to return, it officially makes the American Athletic Conference one to keep a strong eye on. Houston may roll into March, but right there with them are the Shockers and largely due to Etienne. The junior averaged 16.3 points, 3.4 rebounds and 2.5 assists last season. That could easily go up to a cool 18/4/3 and even that might be light.

I’m thinking outside of the box here. Buddy Boeheim didn’t get any major hype from the NBA, so it was almost a foregone conclusion he’d be back. Guys like Joe Girard III and Jesse Edwards were key in bringing back, but Sidibe has the best return on investment. He was injured during the first game last season and will try and run it back again. When healthy, he’s an important piece down low. In 2019-20 the big man started 32 games and averaged 6.0 points, 7.6 rebounds and 1.4 blocks per game.

Nolley was one of the biggest transfer pickups in 2020 and will re-join the Tigers for a second year. Coming from Virginia Tech, he hardly missed a beat, with his averages just slightly dipping with the exception of his defensive efforts. Nolley will once again be called upon as a main catalyst for Memphis.