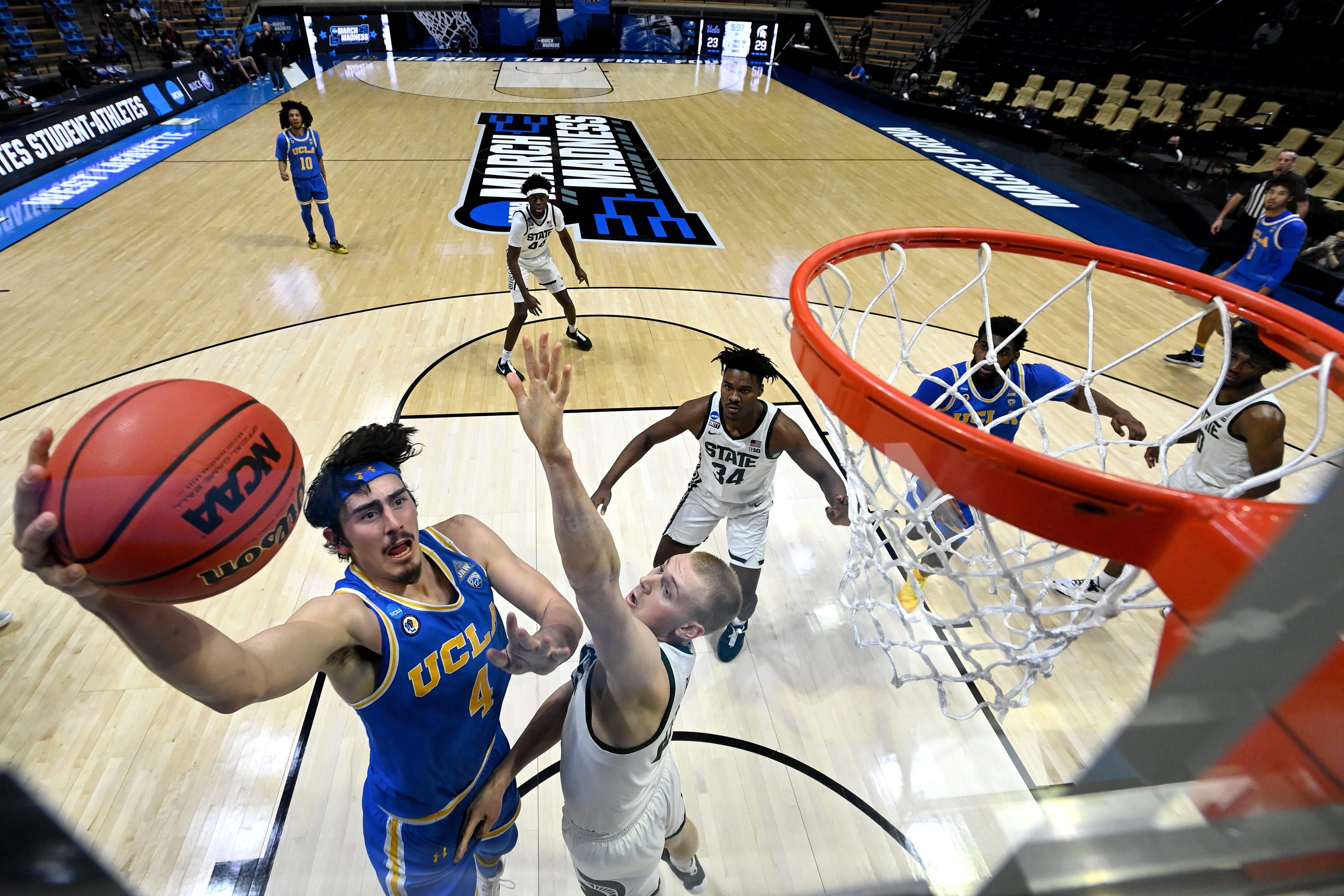 UCLA defeats Michigan State to in a March Madness thriller to advance to the round of 64.

Entering a game that was believed to be a rock fight, the first half was anything but that. Michigan State took a 44-33 lead into the break shooting 56.7% from the field and assisting on 59% of their made field goals. UCLA however, was not to be outdone as they shot 50% from the field to stay within striking distance.

UCLA quickly trimmed Michigan State’s lead down to single digits with the help of lights out shooting from 3-point range by the Bruins. UCLA eventually took a one-point lead on a Jules Bernard layup, but the Spartans quickly responded seven unanswered points. The final five minutes were back and forth leading to a fantastic March Madness finish. Jaime Jaquez Jr. finished an and-one for UCLA with 0:28 seconds remaining to tie the game at 77 sending it to overtime.

Johnny Juzang quickly got the Bruins on the board in overtime with four straight points coming out of the gate. Those four-point were all that was need to finish off the Spartans as the Bruins never trailed in overtime defeating the Spartans 86-80 on the first night of March Madness.

Jaime Jaquez Jr. had a career night with a game-high 27 points. He was joined by Johnny Juzang as the only players in the game to reach 20 points, Juzang finished the night with 23 points. Jules Bernard and Cody Riley each added 11 points for the Bruins.

1) The Jaquez and Juzang Show

UCLA needed Jaime Jaquez in the first half to stay within striking distance after an explosive offensive first half for the Spartans. With 14 points in the first half and going 6-of-10 from the field. Not to be outdone, however, Johnny Juzang added his name to the ring in the second half joining Jaquez with 13 points in the second half and then scoring the first four points for the Bruins in overtime, which was all that was needed to end Michigan Stat’s NCAA tournament hopes. Jaquez led all scorers with 27 points while Juzang finished the game with 23 points. The two were a combined 20-of-40 from the field and 6-of-13 from 3-point range.

2) Draining it from Deep

It was raining 3-pointers in the second half for UCLA. After shooting 50% in the first half from deep knocking in 3-of-6 from deep.&nbsp; UCLA was not done. It was a second-half 3-point shooting clinic performed by the Bruins as they continued to drain the rock from deep making 6-of-10 and outsourcing the Spartans by 15 points from deep. Juzang and Jaquez were the main duo once more doing the damage that helped the Bruins to a comeback First Four March Madness victory.

UCLA was stagnant in the first half allowing the ball to stand still and their movement off the ball was minimal. In the first half alone, UCLA finished with 14 made field goals with only four assists. The second half was a different story, UCLA began using their team to help spark an 11-point comeback after halftime. The script was flipped in the second half as the Bruins once again knocked in 14 made field goals with eight of the assisted.&nbsp;