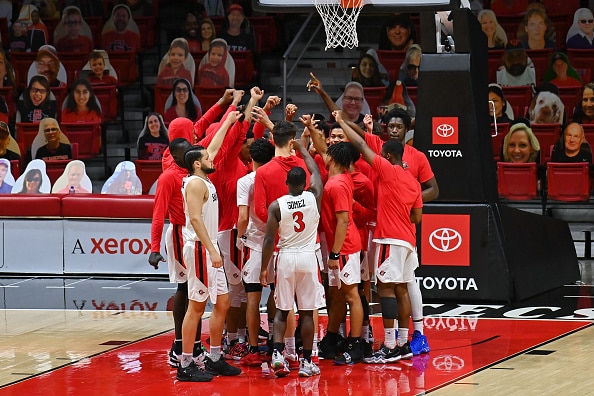 The Mountain West Finals are set as San Diego State and Utah State will meet for the third straight year.

In the first semifinal matchup of the evening, San Diego State grabbed a hold of the lead in the first half after a 14-3 run and never relinquished the lead from there as they defeated Nevada 77-70. Matt Mitchell showed why he was named the Mountain West Player of the Year as he led the Aztecs with 24 points and eight rebounds. Jordan Schakel added 15 points and nine rebounds for San Diego State. Trey Pulliam finished with 13 points. Lamont Butler added 10 points and Terrell Gomez finished with nine points.

The Mountain West Newcomer of the Year and first-team all-conference selection Grant Sherfield led the way for Nevada with 25 points, five rebounds, and six assists. Warren Washington added 19 points and nine rebounds for the Wolfpack and Desmond Cambridge added 17 points of his own. No other Wolfpack player scored more than five points in the game.

In the second game of semifinal action, Utah State used an early second half surge to propel themselves past Colorado State 62-50 and into their third straight Mountain West Final. Neemias Queta did everything for the Aggies finishing with 18 points, 14 rebounds, and nine blocked shots. Justin Bean added a double double of his own with 13 points and 11 rebounds while Brock Miller added 11 points.

Colorado State struggled from the field and couldn’t find any open space around the basket to get things going. David Roddy led the way for the Rams with 13 points and 10 rebounds. Isaiah Stevens finished with 15 points and seven rebounds and Dischon Thomas added nine points for Colorado State.

1) San Diego State is a Threat in March

San Diego State is a better team than their NCAA tournament resume suggests. The Aztecs are currently a No.8 seed at the Bracket Matrix, yet they are currently ranked #18 in the country and have been ranked for four straight weeks. The Aztecs have quietly won 13 straight games, the third-longest in the country. They are a defensive juggernaut who has only allowed four teams to reach 70 points all season. The only blemish holding the Aztecs back is their lack of quality wins as they currently have zero wins in Quadrant one of the NET on their resume. San Diego State has the making of a second-weekend team, they even have the numbers that compare to past NCAA Champions. San Diego Stae can defend, so they will be in games and have the opportunity to win, but can Matt Mitchell and Jordan Schakel lead an offense capable of making a deep run?

2) Mountain West is Living Life on the Bubble

It won’t be possible that the Mountain West has only one team heading to the Big Dance, however, three teams are squarely on the bubble. Boise State will remain there and it seems likely that they will be watching the tournament from home despite having a road win over BYU. Utah State is likely a lock now that they have beaten Colorado State for a second time this season. They will play San Diego State in the Mountain West final and win or lose, they will make the tournament. For Colorado State, it will be a long Saturday and Sunday waiting and hoping they hear their name on Selection Sunday. The Rams have made their case. They are good enough to make the NCAA, they are good enough to win a game or two in the tournament, but have other teams done more to make it. How this committee perceives the Mountain West is a question only they can answer.

Utah State’s defense is second in the conference behind the superb defense of San Diego State. The Aggies have only allowed eight opponents to score at least 70 points in a game and five of their seven losses have occurred when that has happened. They have good guards on the perimeter but it’s Neemias Queta on the inside that allows this defense to be as good as it is. Queta set a career-high with nine blocks against Colorado State and it’s his rim protection that allows this defense to be so good. His teammates know he has their back. If they get beat he cleans it up. He alters shots, he blocks shots, but even more importantly, he frustrates his opponents. His protection on the backline is so good that his opponents can’t help but to force their offensive attacks. Neemias Queta looks to have carried Utah State back into the NCAA tournament.