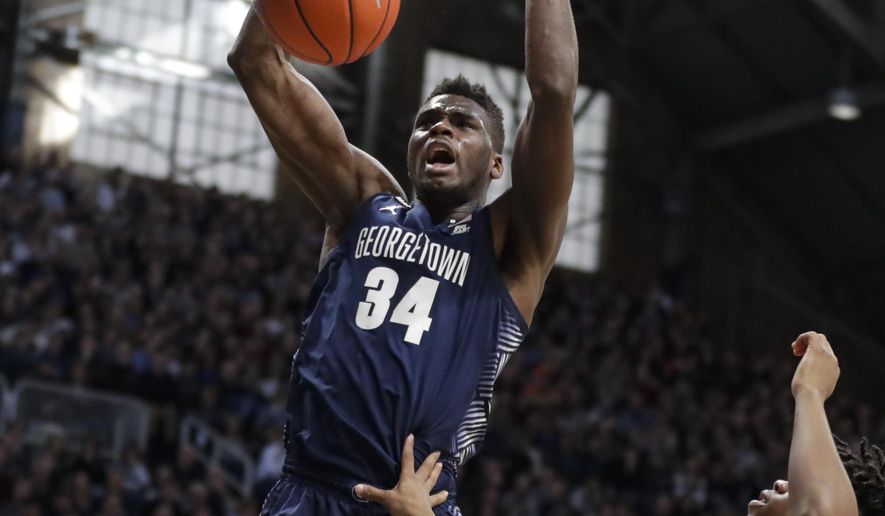 Day two of the Big East Tournament continued with another big shocker early on.

Magic happens at the Big East Tournament and apparently having little to no fans takes away little of that magic at all. Four teams advanced to the semifinals but just two of the top four moved on, making it as unique as a semifinal as the conference as had in recent years.

1) Georgetown has put on a slipper

Cinderella may only need one slipper to start to dance because halfway through the 2021 Big East Tournament and the Hoyas have all the storylines.

After taking down Marquette on Wednesday, the Hoyas played top dawg, knocking off the Collin Gillespie-less Villanova Wildcats in the Noon game.

Dante Harris and Qudus Wahab combined for thirty-five points, but it was the Georgetown defense that held Nova to just 9-of-30 from deep that helped coach Patrick Ewing earn his second career Big East Tournament win, 72 to 71.

The Hoyas are playing with house money and after taking down the top-seed, shouldn’t fear anyone else left in the tournament. Next up will be a feisty Seton Hall Pirates bunch – but one that Georgetown just topped last month.

Not much else is to be said other than Georgetown is playing spoiler and they have fun doing so.

The Pirates took down St. John’s in overtime, going to its stars when it counted. Co-Big East Player of the Year Sandro Mamukelashvili notched a double-double of 20 points and 11 rebounds, while sidekick Jared Rhoden poured in 19 points and 16 rebounds.

But most importantly, it kept Seton Hall – perhaps the biggest named bubble team on the verge of bursting – from popping. The Hall survives and advances and has a date against a favorable matchup versus Georgetown. It’s a game where both teams have an edge, but if Seton Hall doesn’t make silly mistakes, has a good chance at penciling its name into the Big East Championship game.

3) UConn and Creighton will have their version of the championship

This isn’t to down Georgetown or Seton Hall – the Hoyas are playing their best basketball of the season and Seton Hall is a perennial tournament team right in the mix again. But the Huskies and Bluejays are both seeded top three in the conference and will face off in the best game on paper on Friday night.

Both teams crushed their Thursday night opponents – Creighton beat Butler by 31 and Connecticut destroyed DePaul by 34.

And what are their rewards? A chance for a big-time quality win that could boost the winner a seed line in lieu of Selection Sunday.

The guard matchup will also be something to watch – James Bouknight and Marcus Zegarowski are two of the most fun players to watch in the Big East, so it’ll be showtime Friday night.