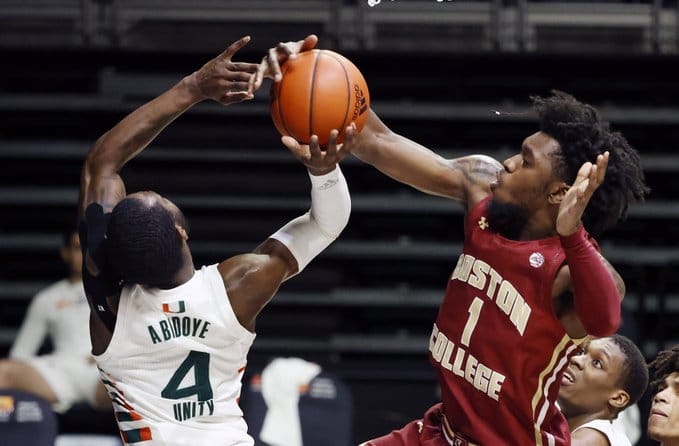 While the basketball team is preparing for its opening round ACC Tournament game, the Boston College Basketball coaching search is underway.

The Eagles will open play as the 15-seed and play 10-seed Duke on Tuesday, March 9 at 4:30 pm in Greensboro, NC. The winner will play seven-seed Louisville in the second round on Wednesday, March 10 at 6:30 pm.

While the players and current coaches are concentrating on extending their season, AD Patrick Kraft will soon set his eyes and effort on replacing Jim Christian, who was given his walking papers on February 15, 2021, after guiding the Eagles to a 3-13 (1-9) record this season. His career mark was 78-132 (26-94) after seven years.

Boston College has hired a Texas-based search firm, Eastman and Beaudin, to aid in that process. Kraft will need to increase the budget and place an emphasis on basketball to lure the right candidate.

Here is a list of potential candidates for the Boston College Basketball Coaching Search:

Eisley has a lot of what Kraft is looking for: ties to BC, knows the academic rigors, young, and a minority candidate. Eisley played at Boston College. The only downside is that he has never been a head coach. The 12-year NBA veteran is a 1994 BC grad and has served as an NBA assistant coach for nine years. He is currently on the staff of Juwan Howard at Michigan. Kraft might have to wait a while to interview Eisley as Michigan is poised for a long NCAA Tournament run.

Another BC grad, who might jump at the chance to coach his alma mater. If Schmidt can win at St. Bonaventure, he can elevate Boston College’s program. Schmidt guided the Bonnies to the NCAA Tournament in 2018 and has them in the championship again this year. They play VCU on Sunday, March 14. The Bonnies should receive an at-large berth should they lose to VCU so any potential interviews might have to wait.

Kraft wants young, which might eliminate Pitino. But, he started his college coaching career in Boston (at Boston University) and could close his career coming full circle by taking the BC job. He knows what it takes to win in the ACC and at the national level, having guided Kentucky and Louisville (later vacated) to national championships.

Becker has led the Catamounts to 239 wins in 10 seasons, eight postseason berths, including three NCAA Tournament berths, and is poised to make the jump to a higher level. His Vermont teams have not finished outside the top three in the regular season, including five regular-season crowns.

Amaker wouldn’t even have to move his family if he were to take over as BC bench boss and he certainly understands recruiting at a school with tough admissions standards. Amaker has had incredible success at Harvard and certainly knows what it takes to coach at the major level having had previous stints at Michigan and Seton Hall. He has led the Crimson to seven NCAA Tournaments, including four in a row from 2011-2015 and as recently as 2019. He has a career coaching record of 414-274.

The perfect scenario for Kraft would be to try and lure Beilein, who just turned 68 years old, for two years and bring in Eisley with him and have Beilein groom him as the head coach in waiting. If not, the Eagles would be well served to go after one of the names listed here.