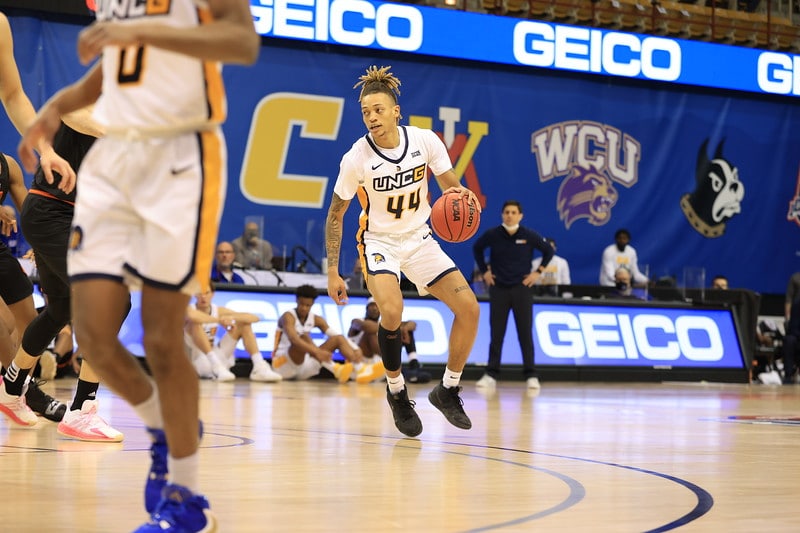 Winning the Southern Conference Championship is no easy task. The SoCon is a league that has a recent history of multiple teams winning at least 20 games, with a few winning 30. This season was extremely competitive, and that was evident in the volume of upsets by seed that the tournament saw. However, when the dust settled, the UNC Greensboro Spartans, the league’s regular-season champions, took down the Cinderella Mercer Bears 69-61 to take the Southern Conference Championship. Isaiah Miller reminded everyone why he was the league’s player of the year by scoring 25 points, grabbing 12 rebounds, and dishing out six assists.

For as competitive as the Southern Conference was this season, the expectation was always that either UNCG or Furman would be the team hoisting the championship trophy on a Monday in Asheville. Those prospects seemed shaky for awhile, especially when Greensboro started the season slow in non-conference play. However, the Spartans continued to improve throughout the season, eventually working their way to the top of the standings. They split against fellow teams near the top of the standings, and did just enough to squeak out a regular-season title.

Just as UNCG took many team’s best shots during the season, the Southern Conference Championship was no different. It looked as though The Citadel might pull off an upset in Greensboro’s first game of the tournament, but the Spartans pulled away late. The same is true of their quarterfinal match-up against East Tennessee State. And, finally, Mercer gave UNCG all they could handle for about 37 minutes. However, the Spartans played like the champions they were in the game’s final minutes, earning their place in the 2021 NCAA Tournament field.

2) History caught up to Mercer

Recent history isn’t the only thing that shows how tough winning a Southern Conference Championship can be. Mercer was looking to be the first team since 1939 to win four games in four days to take home the league’s automatic berth. The Bears dispatched 10th seeded Samford, eked out an upset over Wofford in the quarterfinals, and pulled away from fellow darling VMI to advance to the championship game. The Bears were a league sleeper entering the season, and their run in this tournament reminded everyone why that was the case.

However, history would prove to be too much, even for one of the better seven seeds you could find in any mid-major conference tournament. The Bears looked like they were losing steam towards the end of the game, though not for a lack of effort. It’s the same problem Wofford ran into when they tried to do the same thing in last year’s Southern Conference Championship game. Unfortunately, the clock struck midnight on the Bears. It remains to be seen if Ross Cummings will take advantage of his free year of eligibility. But, if not, it’s a heartbreaking exit for one of Mercer’s best players in recent memory.

Let’s face it. The Southern Conference is slept on. The league doesn’t seem to get the respect it deserves on the national stage. Because of that, Isaiah Miller is probably not known by the average college basketball fan, and that’s a shame. Miller certainly has a future in the NBA, and he has the credentials to prove it. He took home the SoCon’s Player of the Year honor for the second-straight season as well as the league’s Defensive Player of the Year honor for the third-straight season. He has been dominating in a league that’s hard to dominate in.

Miller averaged 19.1 points, 6.7 rebounds, and 3.9 assists per game this season, and those averages fall in line with his performance in the Southern Conference Championship game. He was a member of the 2017-18 Spartans group that nearly upset Gonzaga in the first round of the NCAA Tournament, but his role has changed significantly since then. Now, Miller gets to return to the game’s greatest stage once more, getting to display the kind of superstar that he has blossomed into. That’s bad news for whoever Greensboro’s opponent will be in the first round. Don’t sleep on Miller and the Spartans and their odds of pulling off an upset.