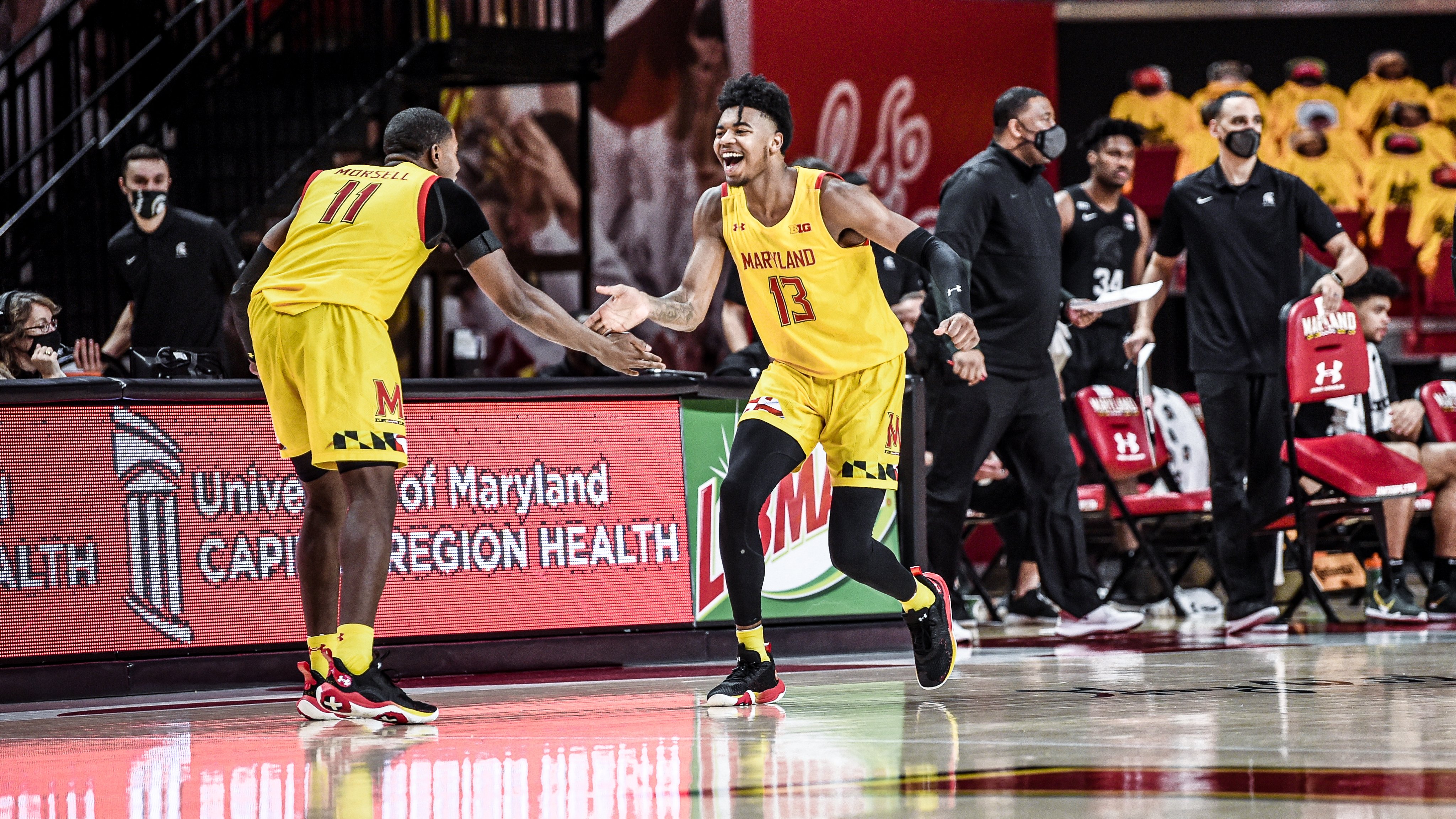 Maryland basketball continued its rise in mock brackets with a convincing victory over Michigan State on Sunday.

Maryland basketball wasn’t feeling any love around Valentine’s Day. However, the Terrapins have reeled off five straight wins after thrashing Michigan State 73-55 on the final day of February. Eric Ayala led the Terps with 22 points, while Aaron Wiggins added 13 points. The win pushes Maryland basketball up to 15-10 overall and 9-9 in the Big Ten. Joshua Langford led the Spartans, who fell to 13-10 and 7-10 in Big Ten play, with 12 points.

Two weeks is a long time during the course of a college basketball season. We’re two weeks away from Selection Sunday. Two weeks ago, Maryland looked like they were going to ride the cut line right up to the full bracket reveal. Five straight wins later, and now the Terps look like a solid nine seed. During that win streak, Maryland has only given up more than 60 points once, with their defense becoming their calling card as they look to feel safe about their tournament chances.

The win against Michigan State was big in the sense that it’s the last game they had against a potential bubble team. The Terps’ final two games come on the road against Northwestern and at home against Penn State. Every game in the Big Ten is a fight, so it’s not safe to assume Maryland will just easily win both of those games. The Terrapins already have a loss to Penn State this season as it is. However, given the way they have played lately, Maryland fans can breathe a little easier about Selection Sunday.

On the flip side of this match-up is a Michigan State squad that just lost the momentum it had built up. The Spartans were coming off impressive back-to-back wins against top-five teams in Illinois and Ohio State. Those victories were enough to propel Tom Izzo’s men back into the bubble conversation. However, it still feels like every game is a must-win, and today was no different.

If Michigan State had any margin for error, it is all but gone after today’s loss. The Spartans’ remaining schedule includes a home date with Indiana, and then a home and road split with rival Michigan. To stay in the conversation, Michigan State has to defeat the Hoosiers in their next game and earn at least a split with their Ann Arbor foes. Even that might not be enough, meaning some type of run in the Big Ten Tournament may be needed. Michigan State fans are in for quite a roller coaster ride over the next two weeks.

The Big Ten has remained the best conference in college basketball this season. That has been reflected with the amount of teams that have floated in and out of projected brackets throughout the season. The number got as high as 11 at one point, but a clearer picture has finally developed. As it stands right now, the Big Ten has eight teams that can feel pretty comfortable with their standing, while Maryland fans are feeling better and better these days as well.

That leaves three teams with realistic chances to give the league double-digit bids. One of those is the aforementioned Michigan State Spartans. The Indiana Hoosiers are also in the mix, and the game between those two on Tuesday may be a de facto bubble elimination game. The other team that still has a chance is Minnesota, though the Golden Gophers are hanging on by the smallest of threads. The odds that all three miss out at this point seem a little higher than one sneaking in. However, even a nine-bid league would look nice, especially with the number of teams getting projected as protected seeds. The Big Ten will be a force in March.