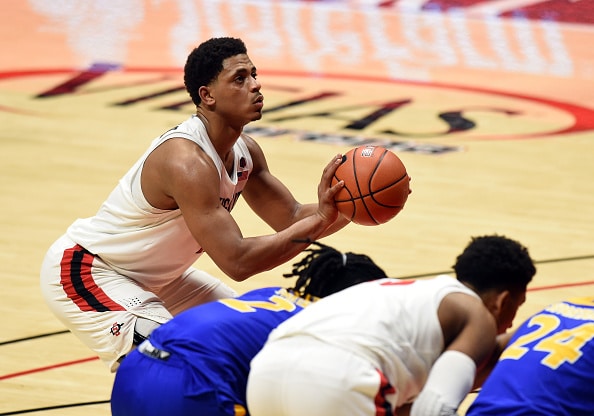 Trey Pulliam had 14 points and Terrell Gomez finished a perfect 4-4 from the field to finish with 10 points for the Aztecs.

Elite Defense for Both Teams

The numbers speak for themselves. San Diego State basketball entered the night sixth in the nation in scoring defense and eighth in field goal percentage defense. Entering the game with a talented high scoring offense the Aztecs defense would need to be a a high level to stay in the race for a Mountain West regular season championship. The Aztecs did everything they needed to. They held Boise State to 17 points in the first half allowing only 24% shooting from the field. The Aztecs forced 12 turnovers, and scored 16 points off of turnovers.

Boise State flipped the script in the second half and completely made San Diego State uncomfortable on both ends of the floor. After being outscored in points off turnovers Boise State won the second half battle forcing 10 turnovers and outscoring the Aztecs 13-7 in points off turnovers. The Broncos used that tenacious defense to fuel a high-power offense forcing overtime before once more San Diego State’s defense took over to finish off the game. San Diego State held their 18th opponent on the season below 70 points moving to 17-1 when doing so.

Draining it from Three

Boise State entered the game making nearly eight 3-point baskets per game in MOuntain West play. The Broncos were smotherd by San Diego State’s deense in the first half finishing the half with only 3-17 from behind the arc. Derrick Alston Jr. changed the fortunes for the Broncos as he led a flurry of 3-point baskets in the second half to erase a 17 point second half defeciet to force overtime. Boise State shot 60% making nine 3-point baskets with Alston going 5-8.

The Aztecs high power shooting in the second half was needed to even the score as San Diego State controlled the game in the paint outscoring the Broncos 32-18 for the game.

Cleaning it up Inside

San Diego State basketball took advantage of Boise State in the paint. Along with winning the battle of points in the paint, the Aztecs also outrebounded the Broncos 34-22 to move to 15-0 when outrebounding their opponent on the season. The battle inside helped San Diego State even the 18-point deficit the Aztecs faced from behind the arc. Nathan Mensah, Matt Mitchell, and Joshua Tomaic worked with the guards to keep Boise State out of the paint making everything at the rim challenged and cleaning up the defensive glass.