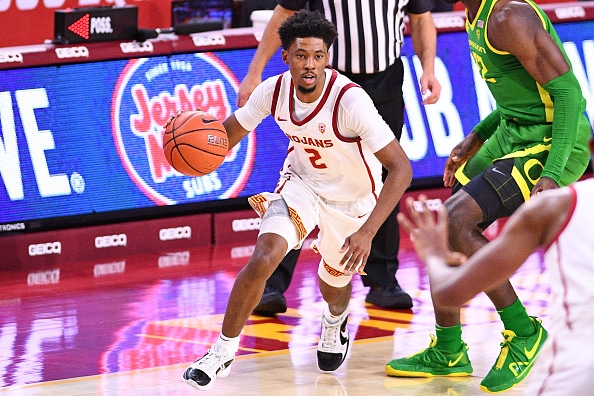 USC basketball outscored Oregon 43-22 in the first half, shooting nearly 50% from the field in the game and knocking down ten threes.

The now 18th ranked Trojans (CBBReview.com Rankings) sit atop the Pac-12, with only in-state rival UCLA within a game of the lead. Oregon loses the opportunity to crawl back into the race with the road loss.

USC basketball now sits atop the conference, holding just a half a game lead over the Bruins of UCLA. Oregon looked like it would make a push, but the big win for USC allows the conference to be fought for in southern California in 2021.

Each team faces Utah and Colorado before coming together and facing off for what could be the league title at Pauley Pavilion on March sixth. USC got the best of the matchup earlier this month, winning 66-48 at their home gym. The rematch will likely be for the Pac-12 title. Grab your popcorn, this one could be an instant contender for the game of the year.

The Ducks have outscored their opponent in 11 out of their 13 league slate’s second halves. However, Oregon has won only nine conference games this season. The Ducks seem to always turn on the jets in the second half, but there are games, including this one, where too little is too late.

Oregon will make the field of 68, barring a losing streak and early exit from the Pac-12 Tournament. However, inability to come out of the gates firing on all cylinders will be a real downfall for the team in March. The Pac-12 is relatively weak, so Oregon can get away with coming out flat-footed in some games. Once the tournament hits, the Ducks cannot come out lackadaisy, or it will be a quick trip back to Eugene.

3) USC has its (second) scorer

Evan Mobley is a lottery pick and is the obvious scorer for the team. But if he is cold, or getting enough defensive attention to limit his attempts, who will step up? It has been Eaddy thus far, and he proved himself further in this one.

Eaddy hit six threes and led all scorers with 24 points. The senior shot over 50% from the field, adding four rebounds and two assists. He currently averages 13.8 points, second to Mobley, who posts over 18 a game. If Eaddy remains this productive, that frees up Mobley even more, making USC basketball a serious offensive threat, and a real dangerous team in the field of 68.

Oregon will travel to Stanford on Thursday, its second of three games this week, looking to bounce back from the tough loss.

USC basketball also has three games this week, traveling to Colorado and then to Utah to conclude the month.