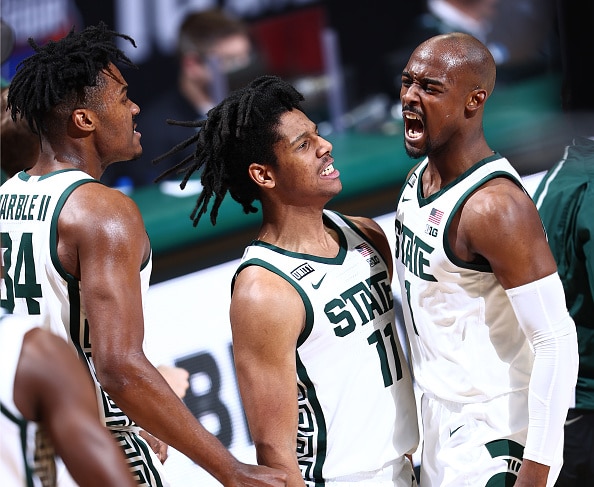 Michigan State basketball earned a much-needed win, positioning themselves for a late-season push into the NCAA tournament.

Using determination, physicality, and will, Michigan State basketball earned an important win in Big Ten play over Illinois 81-72. The win helps position the Spartans to make a push into the NCAA tournament and helps the Spartans to potentially avoid a 10-14 seed and an extra game in the Big Ten tournament.

Michigan State basketball corrected a season plaguing breakdown and protected the basketball allowing the Spartans to play well offensively against a very talented Illinois defense. Joshua Langford set the tone in the first half collecting 10 of his game-high 16 rebounds in the first half. With Langford setting the tone early, Aaron Henry carried it throughout the game leading the Spartans with 20 points six rebounds, and five assists. Joshua Langford added 15 while Rocket Watts and Joey Hauser each added 13.

Illinois was outplayed early and a late rally fell short as the Illini’s seven-game winning streak came to an end. Trent Frasier led the way for Illinois with 22 points. The Spartans held the nation’s sixth highest-scoring duo to just 30 points, 17 from Ayo Dosunmu and 13 from Kofi Cockburn on just 11-27 shooting. Illinois also suffered from a poor free throw shooting night shooting just 19-34.

Entering the game Illinois and Michigan State were ranked 13th and 14th respectively in the Big Ten both averaging more than 12 turnovers per game. Throughout the season Illinois has been able to overcome its turnover woes with the quality of offense but the Spartans have struggled throughout the season.

The first half showed that Michigan State basketball can play with the big boys when they protect the ball. After three turnovers in the first eight minutes of the game along with a few bad shots leading to Illinois having quality opportunities. Michigan State then settled down and only turned the ball over two more times throughout the half while also helping force eight turnovers from the Illini and outscored Illinois nine to two in points off turnovers.

The damage was done in the first half for the Illini. Michigan State’s ability to capitalize off of Illinois’ turnovers and limiting their own, committing only three more in the second half and eight for the game.

2) Battle in the Paint

Michigan State has struggled this season guarding the big man inside, yet has found a way to still outrebound its opponents in 13 of their 20 games. Illinois is a force inside with Kofi Cockburn and Giorgi Bezhanishvili setting up a challenging task for the Spartans inside.

Michigan State never backed down from the challenge.

Challenging by committee, Michigan State basketball fought hard in the first half only trailing the rebounding battle 21-19 and leading 14-6 in points scored in the paint. The Spartans used six different players at the center spot. They rebounded as a team and got to the paint off the dribble.

As the second half went on Illinois and Michigan State continued to play a very physical game. The Spartans continued their edge in the paint outscoring Illinois 38-34. After staying with Illinois on the glass a late desperation flurry of offensive rebounds gave Illinois a 40-35 edge and leading to just their third loss of the season when outrebounding their opponent.

Both Illinois and Michigan State entered the game as two of the top teams in the Big Ten dishing out assists. Ayo Dosunmu for Illinois and Aaron Henry for Michigan State can both create their shot but are both just as great creating an open look for their teammates. The Spartans 10-point halftime lead and their 53.3% shooting from the field came from their ability to play unselfishly, distributing 12 assists on 16 made field goals. While also holding Illinois to only five assists.

After falling behind by as much as 19in the second half, Illinois began sharing the ball to climb back into the game and placing pressure on Michigan State. Michigan State basketball slowed the pace and allowed Aaron Henry to make a play but finished the game with an impressive 18 assists on 32 made field goals.

Illinois 16-6 (12-4) will look to rebound from this loss when they host Nebraska on Thursday, February 25.