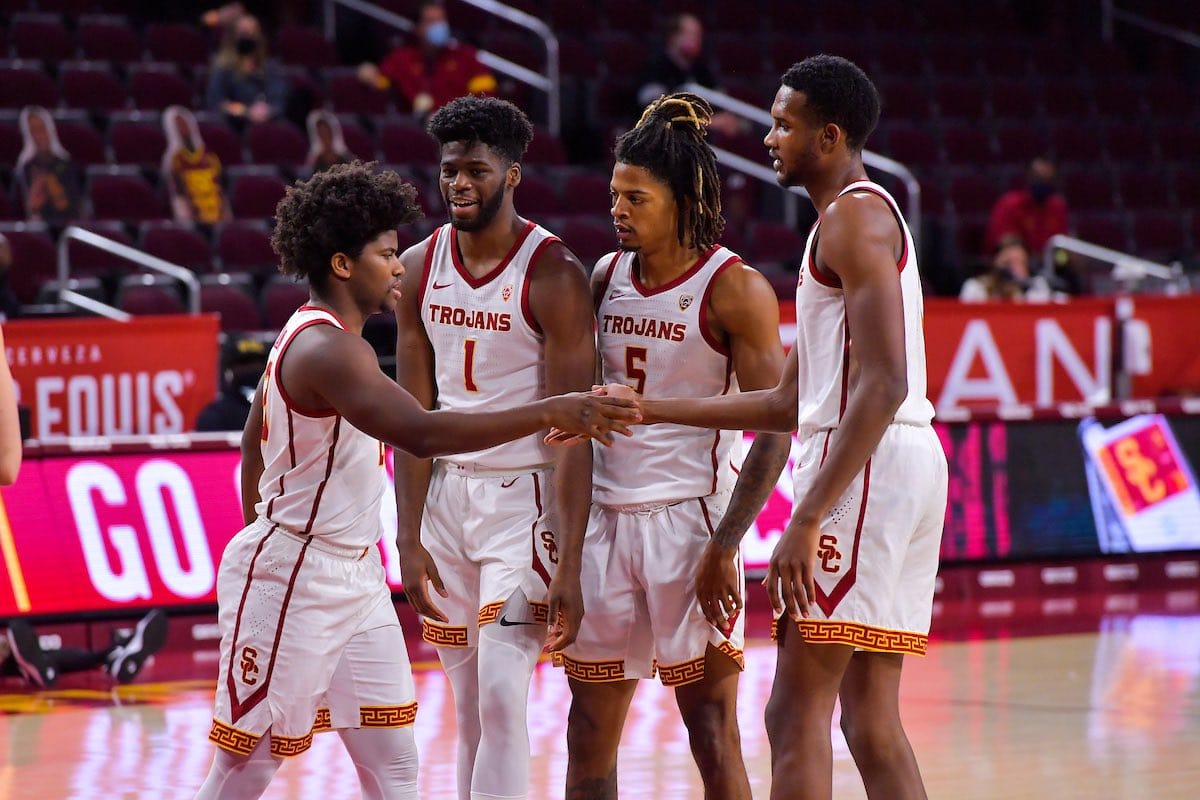 USC basketball strengthened its resume with a win over Stanford.

In the first game played at Stanford’s Maples Pavilion in 338 days, the homesteading Stanford Cardinal were looking to improve their NCAA Tournament resume and Pac-12 standing as well. Those will have to wait as it was visiting USC who scored the last six points of the game in their 72-66 win. It was Stanford’s first home game on campus due to restrictions imposed by local government officials that forced Stanford to be road warriors for this pandemic season.

The Mobley brothers, especially potentially overall number 1 draft pick freshman Evan, generally claim the headlines in a USC win, and deservedly so. However, it was the steady and clutch play of fifth-year grad transfer Tahj Eaddy that led to the Trojans win. The Santa Clara transfer scored 14 points, including four clutch points that broke a 66-66 tie. Eaddy scored on a driving layup to give USC basketball a 68-66 lead with 1:08 left in the game. After a defensive stop, Eaddy hit a fade-away 15-footer to double the Trojans lead. Eaddy finished the night with 14 points and 2 assists in 35 minutes of action. For the season, the steady senior is averaging 12.6 points, while contributing 45 assists to only 25 turnovers in 17 games.

Mobley is blossoming into the discussion on having his name called at the top of the June NBA Draft. He was impressive again against Stanford. The freshman recorded his ninth double double with his 23 point, 11 rebound performance. This included a perfect 7-7 from the charity stripe. He is averaging 16.8 points, 9.0 rebounds, and 2.9 blocks per game.

Trojans came from behind to get their first win at Stanford since 2013! pic.twitter.com/e4SBAhVLLP

The Cardinal were short-handed again as three starters did not play – Daejon Davis, Bryce Wills, and freshman sensation Ziaire Williams. Add in foul trouble that limited Oscar DaSilva to only 24 minutes, the Cardinal hung tough due to the play of Jaiden DeLaire and Michael O’Connell. They combined for 42 of Stanford’s 66 points. Both set career highs in points with 22 and 20 points respectively.

USC Basketball (14-3, 8-2) had feasted on the lower echelon of the Pac-12 before beating Stanford. They will get a chance to improve their standing within the league http://gty.im/1230660269 and NCAA Tournament resume when they host crosstown rival and Pac-12 leader UCLA Saturday night. Stanford (10-7, 6-5) plays a two-game set with rival Cal, with games set for Thursday and Sunday.