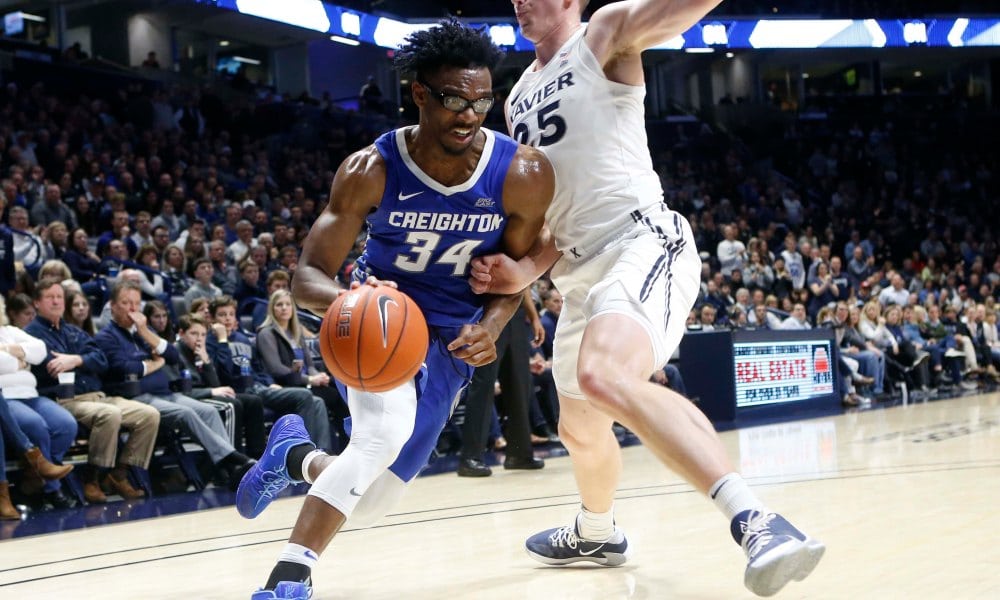 The Creighton basketball team stormed past new Big East rival UConn Saturday courtesy of a strong last 10 minutes. The Blue Jays (11-4, 7-3) used a 14-2 run to break open a 48-48 tie en route to their 74-66 home win and season-series sweep of the Huskies.

#11 Creighton completed a season sweep of #23 UConn with a 74-66 win at CHI Health Center Omaha on Saturday.

1) Creighton Basketball Shot Well and Awful at the Same Time

Coming into the game, Creighton had made only 10 of their last 46 three-point attempts. That trend continued when they missed their first five from behind the arc against the Huskies. However, Creighton made up for it with their two-point field goal shooting as well as a hot second-half effort. For the game, the Blue Jays made 18 of their 27 two-point field goals for a 66% shooting percentage. That happened to be better than their free throw percentage as the Blue Jays only converted 20 of their 32 free shots (62%). For the second half, Creighton shot 58% from the field. This was highlighted in a key 14-2 run that broke open a tie game midway through the second stanza. The good news for Creighton was that they played solid defense, forcing Uconn into a poor shooting game. The Huskies made only 23 of their 63 shots (36.5%).

Mahoney netted a game-high 20 points, including a trio of three-pointers, to lead Creighton in scoring. More impressive was the fact that he made five of his seven two-point field goal attempts against UConn. Mahoney came into the game in a shooting slump, highlighted by a 1-10 performance in a loss to Providence earlier in the week.

Marcus Zegarowksi chipped in with 15 points while Damien Jefferson added 13 points, including making seven of his eight free-throw attempts for the Blue Jays.

The Huskies played their fourth straight game without leading scorer James Bouknight. All he did was torch the Blue Jays for 40 points in their first encounter. As highlighted in a previous article here on CBB Review, the Huskies need some of their starters to step up in his absence and that didn’t happen. Adama Sanogo had another solid outing with 13 points, but he only played 20 minutes due to foul trouble. Senior Tyler Polley was held scoreless in 17 minutes off the bench. RJ Cole tallied a team-high 14 points in 38 minutes. UConn did dominate the boards holding a 42-27 rebounding advantage. Isaiah Whalley and Brendan Adams led UConn in that department, tying for a game-high nine rebounds.

UConn returns to action Tuesday hosting Butler looking to end a two-game losing streak. Meanwhile, the Creighton basketball team hits the road for a pair of Big East games playing at Seton Hall on January 27 and at DePaul on January 30.