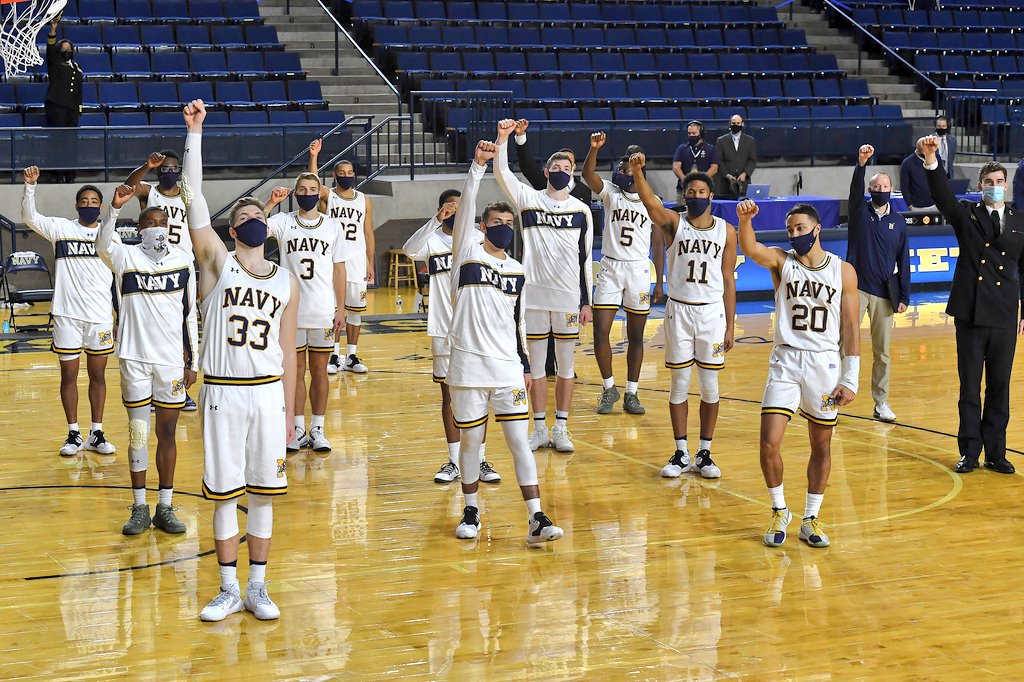 Navy basketball is off to its best start in almost 40 years and is ready to make a return to the NCAA Tournament.

Navy basketball is off to a 9-1 start through their first ten games of the season. The Midshipmen haven’t seen a start like this since David Robinson was just beginning his days at the academy when the 1983-84 team started a perfect 10-0. Everyone knows about the spectacular run the Naval Academy had with Robinson pacing them in the mid-1980s. However, there’s a good chance a lot less know about the kind of tear the Midshipmen are on thus far in the 2020-21 season.

Aside from being off to their best overall start in almost 40 years, Navy is making waves in the Patriot League as well. Only twice has the program started at least 6-0 in league play: Robinson’s sophomore year in 1983-84 and in 1997-98, the last time the Midshipmen made the NCAA Tournament. They are also on a current eight-game winning streak, the longest since the 1999-00 team won 13 in a row. It’s time to give Navy basketball their due as one of the best mid-major teams in the country this season.

The Mids are checking all the boxes and now sit at 6-0 in @PatriotLeague play!@marchmadness | @espn pic.twitter.com/16ilRotsmZ

The Right Man for the Job

The rise of Navy basketball this season wouldn’t come as a surprise to those inside the Naval Academy circles. After all, they feel they have the right leader in place in Ed DeChellis. DeChellis is in the middle of his tenth season in Annapolis, and from day one, he knew he didn’t want to be anywhere else, as evidenced by the quote that stands out in bold on his bio on the athletics website:

“When I did my interview at Navy, Vice Admiral Miller was the superintendent at the time, and he said ‘Coach, I want you to recruit very good basketball players who can help us get to the NCAA Tournament,'” DeChellis says. “But, at the end of the day, you have to recruit young men who are going to be officers in the most powerful military force in the world, and we take that very seriously here at the Naval Academy. That really hit home with me, and I knew I wanted to be part of it.”

Being a coach at one of the military academies is a more unique job than almost any other school in the country. These aren’t just regular student-athletes taking part in competition, they are future soldiers and leaders who’s time constraints are much larger than the average student-athlete. There has to be buy-in and commitment from the coaching staff to understand a bigger picture beyond basketball while still putting a competitive product on the court.

DeChellis has done just that during his tenure. The program has 94 overall wins in the last six seasons after having just 79 in the seven years prior. Furthermore, the Mids have made two Patriot League semifinal appearances in the last four seasons after having no such appearances since 2001. He is up to 123 wins leading the program thus far and has at least 100 wins in each of his prior stops at Penn State and East Tennessee State as well. The work that he has put into the Navy basketball program is yielding results, both on and off the court.

Overall, the composition of the Midshipmen is young. That commitment to youth began last season, and it appears that decision is paying off in a big way this season. Navy had just one senior on the roster last season, and this season’s group only has two. However, one of those seniors, big man Luke Loehr, went down with a season-ending injury earlier this month. That leaves guard Cam Davis as the only remaining healthy senior. Luckily, he’s also the team’s best player and leader. Davis should be the early favorite for the Patriot League Player of the Year honors thus far, as he’s averaging 18.6 points, 2.9 assists, and 1.6 steals per game. All of those averages are career-bests.

However, this team is more than just Davis, and that became even more evident after this past weekend’s series against American. Davis went off for 34 points in a one-point overtime win over the Eagles on Saturday. However, he was held to just two points in Sunday’s rubber match. That was no problem for the Midshipmen, as the bench picked up the slack and led Navy to a 12-point victory. That kind of next man up approach can serve Navy well moving forward. They have 10 players averaging at least 10 minutes per game, keeping everyone fresh. That kind of depth can pay dividends when the wear and tear of a season sets in around late February and early March.

It should come as no surprise that a team that represents a military academy has great discipline. And, it’s been that discipline, especially on the defensive end, that is propelling the Midshipmen to their success. Navy forces their opponents to turn the ball over on almost 22 percent of their possessions, which ranks 60th in the nation. They are also keeping opponents off the offensive glass, allowing them to grab just 24.8 percent of possible offensive rebounds, also ranking them just outside the top 60. Players are not afraid to grind and fight for the ball on every opponent possession. Meanwhile, offensively, Navy takes care of the ball as well, turning it over on just 16.8 percent of their possessions.

All of the grit and effort Navy basketball plays with helps make up for the lack of size they have. The Naval Academy has height restrictions as part of their admission process, and that obviously puts a strain on the efforts that are made on the basketball court. David Robinson actually met the height criteria, but had a late growth spurt between his freshman and sophomore years to become the dominant big man we all came to know him for.

Nobody on the roster is taller than six feet, eight inches. As a result, opponents aren’t necessarily afraid to take it to the basket, shooting 55.9 percent from inside the arc. However, by preventing opposing teams from having successful possessions, as evidenced by those turnover and rebounding numbers, the Mids are able to balance out the height disadvantage they often face.

The upcoming weekend doesn’t get any bigger at the Naval Academy. From day one, all Midshipmen have a familiar phrase ingrained in them: “Beat Army.” They will get their first two cracks at that accomplishment on the hardwood on Saturday and Sunday. For their part, Army is having one of their better seasons in recent memory as well, sitting at 8-3 overall and 4-2 in league play, including a win over another league stalwart in Colgate. More importantly, the game on Saturday counts towards the Star Series, which is an official tally of the Army-Navy scorecard across all athletics events throughout the athletic calendar.

The bottom line is that Navy basketball is here to stay this season. They have emerged as the new Patriot League favorites after being picked fourth in the preseason. However, outperforming expectations is nothing new, as they have done that often under DeChellis. The Midshipmen will avoid Colgate until the Patriot League Tournament due to a restructuring of the league schedule due to the ongoing pandemic. That sets up a favorable schedule that could see them run the table in league play. Navy is poised to break their 23-year NCAA Tournament drought and will be a pesky team to face for any potential opponent.