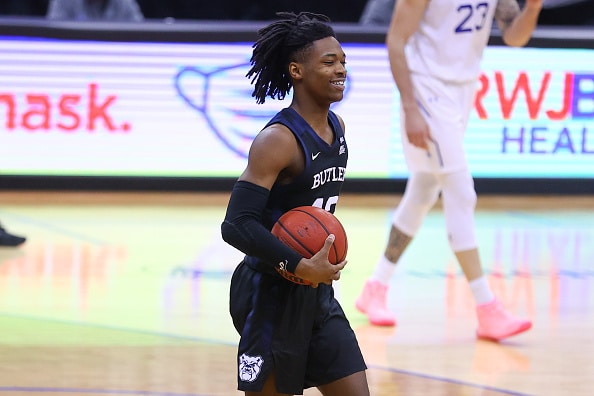 Kamar Baldwin and the 2019-2020 Butler basketball squad turned heads and caught eyes as the Bulldogs reached as high as #5 in the AP Poll. The Bulldogs were a clear NCAA tournament team before Covid-19 shutdown the final weeks of the NCAA basketball season and they had the talent, skill, and depth to reach the Sweet 16. This season for Butler has been a series of unfortunate events leaving cause for concern.

Butler basketball was not supposed to be the identical team it was in 2019-2020. With the departure of Kamar Baldwin, Sean McDermott, and Jordan Tucker, the Bulldogs lost three of their top four scorers. Khalif Battle transferred. Henry Baddley and Derrik Smits graduated, and suddenly 67% of the scoring from the 2019-2020 basketball team was gone.

Butler started the 2019-2020 season 15-3. On a Tuesday in January, Christian David tore his ACL in a loss to Villanova. From that moment, Butler was never the same and finished the season 7-5, 7-6 if you include the Villanova loss. David was never a stat sheet stuffer, but an important glue guy that Butler basketball is still without today.

Aaron Thompson has missed 8 of BU's last 17 games dating back to last yr.

JaKobe Coles is out today due to his knee.

On top of all that, Scooby Johnson, the top recruit in Butler’s 2020 class, tore his ACL in the summer. Aaron Thompson, the Bulldogs’ best defender, and starting point guard injured his knee against Villanova in Butler’s second game of the season after a long pause from a stoppage due to Covid-19.

The ultimate snowball, rolling down a hill and continuing to pile on a program day after day.

After winning their first game of the season, Butler basketball is 1-5 after returning from quarantine, and concerns are rising. What for though is the true question. It was unlikely that a team as depleted as Butler would be competitive against Villanova and Indiana. However, for at least a half in both games, the Bulldogs were just that. A group of role players and three-star freshman found a way to play the game and compete against one of the best teams in the country for 20 minutes with almost no practice.

Butler basketball has put in place building blocks for a bright future if things don’t turn around. It may be unlikely that Butler basketball can make a run into the NCAA tournament this season, but it’s certainly possible. They are 2-5 with a majority of their Big East schedule remaining. They have had growing pains, and have only played one game with the full roster that was expected at the start of the season. The moments and the effort are there.

Myles Tate, Chuck Harris, and JaKobe Coles have shown flashes of brilliance. They are becoming a trio of freshmen that Big East coaches will not want to deal with for four years. Those building blocks begin this season.

Tate, Harris, and Coles aren’t just important for the future, but for this season. The three of them combined for only 33 points in the first two games of the season. In the last five games, they have averaged just under 30 points per game which includes Coles missing Butler’s last game against Seton Hall. These three are finding their way in the college game. They are understanding, they are learning day in and day out, and are providing a leg for Butler basketball to stand on.

Jair Bolden needs to score. The graduate transfer from South Carolina is Butler basketball’s shooter and combining him with the three freshmen allows Butler to have a better offensive attack, which has been a struggle for the Bulldogs. If Bolden, Harris, Tate, and Coles can continue to meld together when Aaron Thompson returns he will be able to do what he does best, facilitate. Butler basketball is at its best when Thompson facilitates on the offensive end surrounded by scoring threats.

The last thing that needs to be put in place for Butler is smarter playing from Bryce Golden and Bryce Nze. The big men and only true returning players on the court for the Bulldogs are trying to do too much. Golden is shooting 39.7% from the field down from 50.3% last season. Nze is only slightly better at 44.6% however, he shot 62.9% in 2019-2020.

Both are forcing shots with Thompson out. They are trying to create for themselves and fall into the trap of feeling they need to do everything to keep this team together. The fact that Nze is only one 3-point shot attempt shy of his season total attempts from last season is all too telling of the pressure that these two are feeling.

LaVall Jordan has his work cut out for him this season. The fact that Jordan has yet to have back-to-back winning seasons as a head coach should not be of great concern. Butler basketball, as they always do will find a way, the Butler Way. Jordan is building the program to what will work best for his tenure, and that process is still ongoing. Butler has not fired a coach since Joe Sexson in 1989. LaVall Jordan is not going to be next anytime soon.

The future is bright for Butler basketball. Young stars are on the rise and if a few talented seniors decide to use their extra year of eligibility Butler will be back for sure. However, the question remains as to if Butler basketball can figure things out this season.