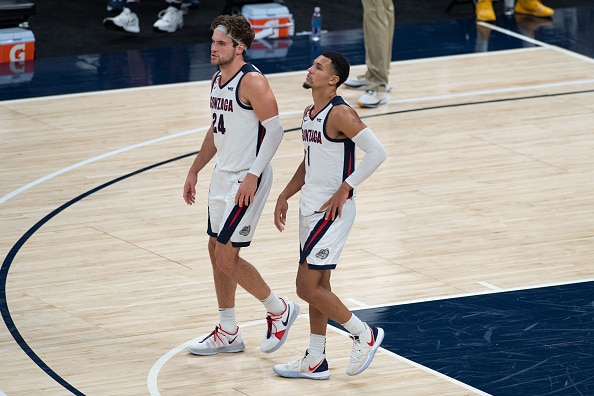 Gonzaga furthered its seemingly flawless case as the best team in the country, knocking off sixteenth ranked Virginia by 23.

The Zags showed off their elite offense, putting up 98 points on an elite Cavalier defense, with Corey Kispert leading the way with 32 points on nine made three pointers.

1. Gonzaga is as legit as it gets

The Zags showed once again how lethal their offense is, with Kispert and Drew Timme (29 points, 8 rebounds) absolutely tearing apart the packline defense.

The defense was also there for Gonzaga, forcing Virginia to turn the ball over 15 times, almost double the season average. They also held Virginia to just 16 attempts at the charity stripe.

2. Virginia has pieces to win, but they need to make adjustments

Kihei Clark had 19 points for Virginia and Trey Murphy III added 15 off the bench. The Wahoos scored 75 points, the fifth time out of six games played. Virginia made 10 three pointers in the loss.

What lacks for Virginia is the defense. With a very young team, and little practice time, Tony Bennett has yet to mold his players into those who can succeed in his signature defense. More reps, more practice, and more time should aid the struggles, but it is up to his guys to buy into the strategy and become the defensive powerhouse all Bennett teams wind up being.

Offensively, Virginia needs to wait for a good shot, but not wait too long before it is gone. Last season, Virginia would milk the clock to find a good shot, but would not have one, and chuck up a last second attempt at a low clip. Today, the Cavaliers seemed rushed on offense, and when patient, was scoring successfully. Virginia needs to recognize when that best shot presents itself and take it, and that offense can be deadly with the pieces it has.

3. Gonzaga is the team to beat

This was Gonzaga’s final game before conference play, which likely means a perfect regular season for the Bulldogs. Can anyone beat Gonzaga in the tournament?

An interesting subject presents itself. If Gonzaga did play Baylor this season, and Gonzaga was firing on all cylinders like it was today, we would know what happens in March by late December. And we may already know. Gonzaga is no doubt the best team in the country, and they proved that today, beating Virginia 98-75.