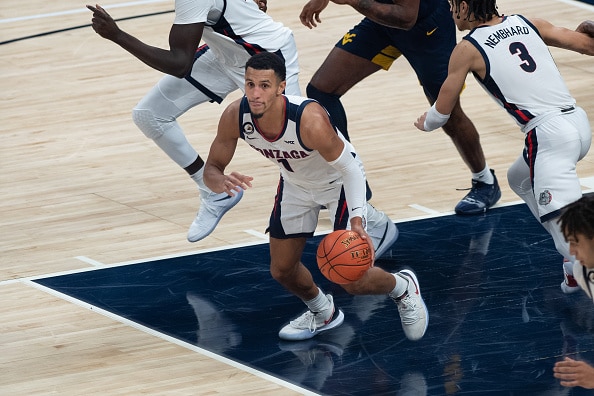 Gonzaga vs Iowa showed the nation just how good Gonzaga truly is and how special Jalen Suggs can be.

Gonzaga vs Iowa was a game to be remembered. It may not have been the most competitive game from start to finish, but Gonzaga vs Iowa showed the nation just how good Gonzaga truly is. Gonzaga and Jalen Suggs took control of Iowa midway through the first half taking a 51-37 lead into the break. Luka Garza did everything he could but in the end, Iowa’s struggles from 3-point range and defending Gonzaga in transition proved to be too much. Despite a second half rally, Gonzaga defeated Iowa 99-88.

Jalen Suggs can do it all. Has another gear, tough, can defend at high level, scores at all 3 levels, but the aspect of his game I have been impressed with the most is his court vision/passing ability. https://t.co/TS5GjAKu1b

Jalen Suggs has been good all season, but Gonzaga vs. Iowa showed everyone just how good Suggs can be. Suggs entered the game averaging 13.3 PPG, 4.7 RPG, 6.3 APG, and 2.3 SPG all while only averaging 25.3 minutes per game. Suggs showed a new level as Gonzaga defeated Iowa. Suggs led the transition game from missed shots and steals. He disrupted the spectacular Iowa offense with deflections and he carried his strong defensive game over to the offensive side. In just the first half, Suggs had 18 points, three rebounds, two assists, and two steals. Suggs is special and gives Gonzaga something that they have been missing over the years, someone who can completely take over a game and someone who could be the first overall pick in the NBA Draft. If there is one complaint and worry in Suggs game, it could be his patience. Suggs finished seven turnovers against Iowa and most were attributed to him going just a split second to fast.

2) Iowa’s Transition Defense will be its Demise

Iowa’s defense is nothing special, but can it be good enough to guide Iowa to a National Championship. Iowa struggled to stop North Carolina in transition giving up 24 points and allowing North Carolina to get back in the game. In the first half of Gonzaga vs Iowa, it was no different when Gonzaga scored 11 fast break points easily 23 points could be contributed to the early push up the court. Iowa had no answer. They entered the game ranked 78th in defensive efficiency. Iowa clawed it’s way back into the game and during that span, Gonzaga looked tired from their two-week break in all basketball activities leading to only seven second-half fast break points. This is an issue to address for Iowa moving forward and if the Hawkeyes want any chance at winning the National Championship.

3) Gonzaga’s Players Have Completely Bought In

Jalen Suggs was the star of the game Gonzaga just kept throwing player after player who did their job and contributed. Suggs entered the game as the team’s fourth leading scorer but during Gonzaga vs Iowa, he led the team with 27 points. His scoring isn’t what makes this team good it’s the depth and the production of the role players. Joel Ayayi finished with 18 rebounds and six assists because that was needed from him. Andrew Nembhard comes in off the bench after he started at point guard for two years at Florida. And it’s more of the same. The stars on Gonzaga have bought into their roles, the role players have bought into their roles. The team has an understanding of just how good they are and how good they can be and will do whatever it takes to become the best.

Gonzaga moved to 4-0 on the season and has now defeated three top 15 teams this season. Next up, Gonzaga will play host to Northwestern State on Monday, December 21 before a neutral site game with Virginia on Saturday, December 26.

Iowa suffered its first loss of the season to move to 6-1. Iowa will now move into Big Ten play when they host Purdue on Thursday, December 22.