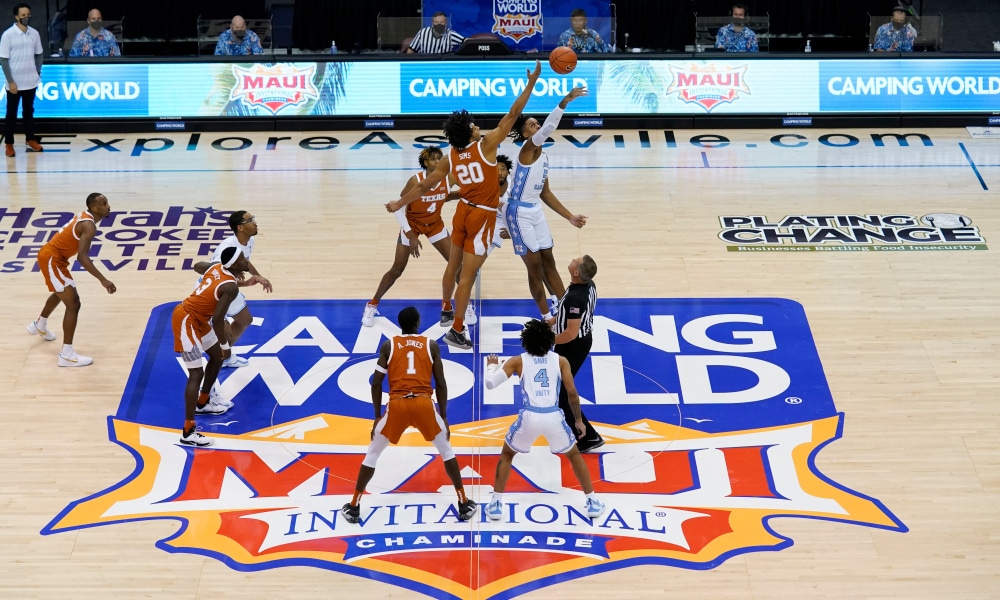 The first game of the tournament was Texas versus Davidson and it was a good one. The Horns defeated the Wildcats behind Courtney Ramey’s 14 points and Matt Coleman’s nine assists.  The game went down to the wire with Davidson almost making the game-winning three in regulation, but the Longhorns prevailed in advance to the next round.

After Indiana’s win, North Carolina faced UNLV in the third game of the Maui Invitational. The Heels got off to an awful start, not scoring for the first six minutes of the game. This trend would not continue, though, as UNC cruised their way to an easy 78-51 win. Roy Williams’ team would face the winner of the final matchup of the first round.

In the last game of the first night of the Maui Invitational, the Alabama Crimson Tide met the Stanford Cardinal. This game was a surprise to many as the Cardinal, led by Zaire Williams and Oscar De Silva won 82-64. They thoroughly beat Nate Oats’ men and would advance to play North Carolina on Tuesday.

Tuesday’s matchups got off to a hot start when Texas defeated Indiana 66-44 in the Maui semifinals. Matt Coleman led the way on offense and the whole Longhorns team locked Iu up the whole game. Indiana could not form any kind of offense and was defeated because of it. The Horns now advanced to the Championship game vs either UNC or Stanford.

In the second game of Tuesday’s battles, North Carolina faced off against Stanford. Leaky Black and Garrison Brooks both had big days and led the Tar Heels to a close win over the Cardinal. Spencer Jones missed the game-tying three with under a minute to go, which sealed the game and let UNC advance to the Championship versus Texas and Greg Brown.

The consolation games might not have been for the Maui championship, but they definitely were worth watching. Providence beat Davidson 63-62 in a highly contested matchup with center Nate Watson scoring 22 points. In the second consolation semifinal, Alabama defeated UNLV 86-74 and avenged their loss to Stanford. John Petty Jr scored 22 in this highly offensive game.

The game everyone was waiting for in the 2020 Maui Invitational was definitely Texas vs North Carolina, and they were right about that. Texas was winning most of the first half, but the Heels came back and tied it going into the final possession. Matt Coleman III had the ball in his hand in isolation during the final play and he hit the game-winning jumper with 0.1 seconds remaining. The Horns would go on to win the game 69-67 and the whole tournament.

All in all, this year’s Maui Invitational was one like no other, but it did not disappoint. With great shots, moments, and performances this year’s tournament won by Texas was one to remember.