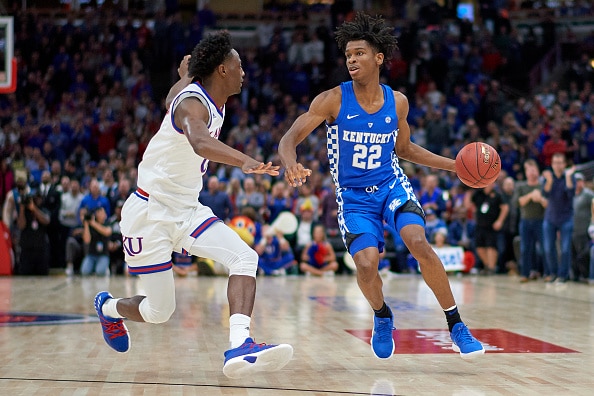 We are just days away from what we’ve been waited months for – the start of the college basketball season.

Two of the top coaches in all of college basketball will face each other in this game. Michigan State will have to move on without Cassius Winston, so to see how they play against an elite defense in Virginia’s will also be interesting. This is also a notable game because Sam and Joey Hauser, who both transferred from Marquette get to play each other after Sam committed to Virginia and Joey to Michigan State.

In the classic Big 12/ Big East challenge, we see a tough matchup for both teams. Both teams feature potential All-Americans in Marcus Zegarowski and Marcus Garrett. This should be a great game on a day that features three top 11 matchups.

Three of the top recruits in the country play on two of the top teams in the country. Jalen Suggs is listed as the #11 recruit for Gonzaga on 247Sports, while Jaden Springer and Keon Johnson are listed as 16 and 19 for Tennessee. Gonzaga has a tough non-conference schedule, and this could be a trap game as Rick Barnes tries to lead this team to a big resume win.

Two of the best programs in college basketball history face each other to start off December. Both teams are facing a ton of question marks to start the season, so this game should be very intriguing. This will ultimately come down to experience vs youth, and it is really anyone’s game.

A lot of people are excited to see how good this Illinois team is with the returns of Ayo Dosunmu and Kofi Cockburn, and this will be a great test after an even better game against Baylor the week before. Duke is looking to add to their resume, especially if they lose to Michigan State earlier in the season and this will be a perfect way to do so.

As mentioned before, this game will be a battle. Jared Butler for Baylor and Dosunmu are seen as two of the top guards in the country, so seeing them go up against each other might be the best player matchup of the year. Expect this to come down to the wire.

The first top 10 matchup of the seasons comes against the top 2 teams from last season. Both teams look a little different, but nonetheless are primed to make another title run this season. Having a game as good as this to start the season is a great way to cause excitement, something us college basketball fans have needed for too long.

There’s few things better a Top 5 matchup, and this one could a great one. This day alone is amazing, featuring three top 10 matchups, and this could very well be the best one. Corey Kispert and Luka Garza are two of the top players in the country, and both have a lot of other guys on their teams to lighten the load.

The two most recent champions, (unless you give Kansas the championship last year), play each other in a highly touted game. Jay Wright and Tony Bennett are going to have a lot of fun making a game plan for this one, and this will probably be the last game for each of them before they start conference play in two of the best conferences.

Nothing can trump a 1 vs 2 battle, and we may see this same exact matchup in the March Madness final in April. The amount of talent on both teams is some of the best we’ve seen in recent years, and both teams offer elite offense and defense. This is going to be a game we will be talking about for weeks after about how excited we are to see these two teams possibly play against each other later in the year.