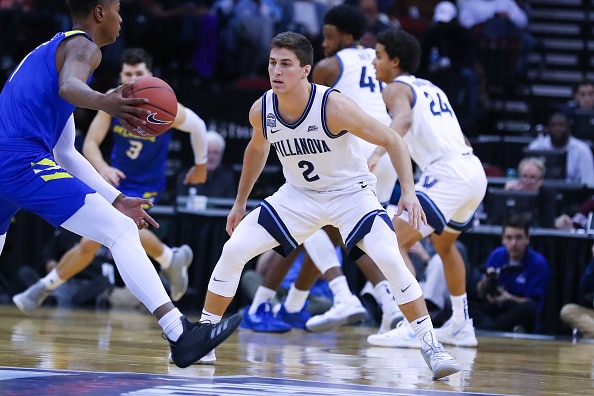 Big East basketball saw some generational players graduate. But it’s still a conference with a lot to look forward to this season.

After losing star seniors Myles Powell and Markus Howard, the Big East will have to re-load. But with Villanova and Creighton as serious title-contenders, perhaps it won’t be as much of an off-year as some people expect. Seton Hall and UConn and dark horses, while coach Ed Cooley looks to bring Providence to the top of the conference.

Below are the predictions for the final standings, awards, and outlooks for each team in the Big East. Brace yourself, it will be a wild year of college basketball, just what every fan has been waiting for.

Coach Patrick Ewing dealt with a lot last year as the Hoyas finished in ninth place in the conference last season. Things won’t get easier after Mac McClung announced his decision to transfer to Texas Tech.

This year, the Hoyas will have to rely on Jahvon Blair, Jamorko Pickett, and Qudus Wahab – just three rotation players from a year ago who have some growing up to do as well. If they can improve, the Hoyas could squeak out a few more wins than expected, but any finish higher than eighth in the conference would be a surprise.

Losing Kamar Baldwin and Sean McDermott is enough and not returning a single double-digit scorer will be hard to replace. Bryce Nze is the top scorer from last season, but he isn’t a big-time bucket getter. Instead, it will be Aaron Thompson at guard who will have to step it up if Butler wants to compete in the Big East.

Since they joined the conference, the Bulldogs have been virtually relevant besides the 2018-19 season, but this season will be a challenge given the magnitude of who they lost.

If role players can step up, it will be a much more watchable season for Butler fans.

Year two of Mike Anderson will be one of the biggest storylines to watch in Big East basketball this season.

He loses L.J. Figueroa but retains leading scorer Rasheem Dunn. Greg Williams Jr. played well at the end of last year and could be a player to watch. However, it was a small sample size, which adds intrigue and a lot of ifs to their guard position.

Julian Champagnie will make for one of the better bigs in the conference and could keep St. John’s in games with his threat to score down low.

It’s a St. John’s team that will be hungry, but just has too many question marks heading into the season.

Does anyone remember when the Blue Demons started out last season at 12-1? Well, that hot play didn’t last for long, as they fell to last in the Big East by the time the season finished.

It’s a toss-up year, but the Big East is certainly down a small notch from last year, so expect DePaul to be at least a bit more competitive than last season. As for a sleeper team? I won’t go that far, but I will say a top-six finish in the conference isn’t out of the realm of possibilities.

Marquette is in the same category as Butler, but given how many shots Markus Howard took per game, it’s hard to really look at returning players and see how many points they would have scored if he wasn’t there.

Obviously, Howard will be a big loss, but Theo John and Koby McEwen were big parts of the team last season. Ohio State transfer, D.J. Carton will likely be slotted into the starting role, and if he is anything like his first half at OSU, it could put the Golden Eagles into the top five once the season is all set and done.

It’s hard to predict how Marquette will fair just because of how much usage Markus Howard took up, but there are key pieces that lean towards the potential of a decent season.

Xavier loses two of the top forwards in Big East basketball last season, as Naji Marshall and Tyrique Jones both used up their final years of eligibility.

However, Paul Scruggs will be one of the top senior guards in the conference and should be able to win Xavier some games.

Zach Freemantle could be a diamond in the rough and will be asked to replace some of what was lost from Jones.

But the biggest question for Xavier this season will be the newcomers. Steele was high on Dwon Odom, Nate Johnson, and C.J. Wilcher over the summer, and they will all be key role players for the Musketeers.

No one should be shocked if Ed Cooley leads the Friars to a top-three finish.

As he nears 200 careers wins at Providence, it will be one of his deepest teams. David Duke, Nate Watson, and A.J. Reeves are a trio of talented playmakers who can cope with the loss of Alpha Diallo. Brycen Goodine, a transfer from Syracuse, is also eligible and could be an under the radar guy to keep an eye on.

If all goes well for the Friars, they could be the story of the Big East. If it doesn’t, they’ll still be in the talk for a NCAA Tournament appearance.

It’s their first year BACK in Big East basketball and the Huskies are already at the top-half of the conference. This doesn’t mean the Big East was weak without them – it’s just a very talented Danny Hurley coached group.

James Bouknight is the catalyst – the sophomore could have entered the NBA Draft after one year in Storrs, averaging 13 points and four rebounds. But he elected to stay with a group that includes rising sophomore Akok Akok and senior forwards Josh Carlton, Tyler Polley, and Isaiah Whaley.

The biggest question will be the transition from the American to the Big East, but this is a talented enough team that should be able to make the jump.

There are few teams in the country who lose as much as the Pirates, but also bring in a tremendous amount.

Myles Powell is the big loss – the All-American led the Pirates to a share of the Big East regular-season championship last season. Also graduated are shot-blocker Romaro Gill and the tough starting point guard Quincy McKnight.

But there is hope. Harvard grad-transfer Bryce Aiken will look to revisit his junior year status when he averaged over 22 points per game. Canisius transfer Takal Molson is also eligible, and he was a near 17 PPG scorer in his sophomore year.

6-foot-11 inch stretch forward Sandro Mamukelashvili will be back for his senior season in South Orange, and numerous upperclassmen role players like Jared Rhoden and Myles Cale will look to fill scoring gaps in the loss of Powell.

It may not be the star-studded team Kevin Willard is used to, but there are depth and height, and that may be enough for another NCAA Tournament appearance.

The loss of Ty-Shon Alexander would sting most teams, but Coach Greg McDermott practically brings back everyone else.

Marcus Zegarowski is a National First Team All-American contender, while Denzel Mahoney and Mitch Ballock lead an offense primed for scoring in bunches.

Defensively, you can’t knock them either. It was the middle of the pack of the Big East last year, which is saying something for how much their offense puts the ball in the basket.

If Villanova has one team right with them at the top, this season it’s the Bluejays. They may not be your typical Big East basketball school, but get used to it, because the team from Omaha, Nebraska will be at the top of the conference all season long.

It really shouldn’t be a surprise to see Villanova at the top of Big East basketball, but after Seton Hall and Creighton both tied for the conference title last season, it was definitely an off-year for the Cats.

Saddiq Bey is gone, but Jeremiah Robinson-Earl and Jermaine Samuels are back, so the forward position won’t lose a beat.

The name to keep an eye on is Justin Moore. The freshman averaged 11.3 points per game last season and should be counted on for even more in Bey’s departure. Moore has the potential to make the Big East first-team, but on a loaded Wildcats’ roster, we’ll settle for the second team at the moment.

The Cats can compete for a National Title with those guys along, and we didn’t even get to the sharpshooter Cole Swider or any of the other slew of role players coming back. In other words – watch out for Villanova.