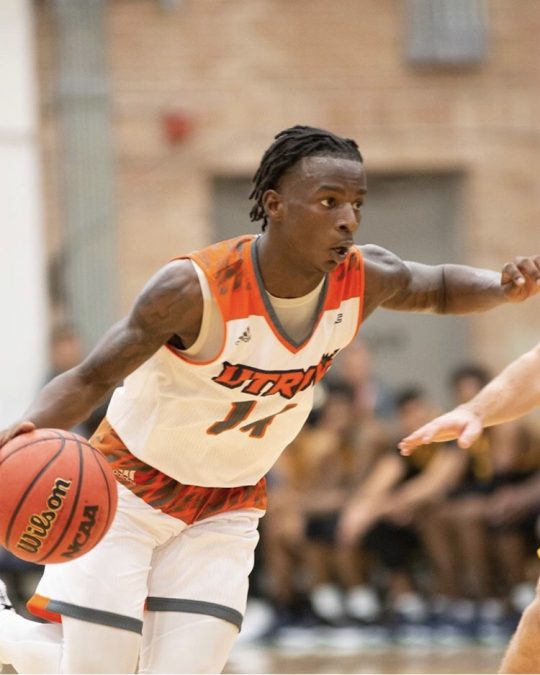 Meet the most underrated player in the country, Javon Levi.

Last season, only two players averaged 8 assists per game. One of those: Javon Levi. That very same player has finished top 11 in back to back seasons in steals per game. Very few players are top 11 in of the major statistical categories, yet despite this accomplishment, Javon Levi doesn’t get nearly enough recognition. As an incoming senior, Levi has a chance to make history and go down as one of the most prolific players in recent history stat-wise.

I had the privilege of talking to Javon Levi. In this interview, we talked about his achievements and being unrecognized for them, how he’s developed his game the past three seasons, and his plan to take down New Mexico State and win the conference next season.

Contents hide
Meet the most underrated player in the country, Javon Levi.
1) Coming out of high school, what made you choose Texas RGV?
2) What is one part of your game you’ve improved on the past three seasons?
3) What was your reaction when you heard the conference and NCAA Tournaments were cancelled?
4) This season, you were tied for first in all of NCAA D1 in assists per game. What do you do to always find that open teammate?
5) After winning defensive player of the year twice in the conference and finishing top 11 in steals per game the past two seasons, do you believe you are the best defender in college basketball?
5a) Is there any player you haven’t had the chance to guard that you’d love to guard one on one?
6) Do you feel robbed that you only made the All-Conference second team after the season you had?
7) Who is one player you modeled your game after?
8) What has your team done to prepare for next season and attempt to take down the powerhouse in New Mexico State?
9) What is one part of your game you’ve been working on this summer for next season?
10) Do you have any individual or team goals for next season?
Share this:
Like this:

1) Coming out of high school, what made you choose Texas RGV?

Javon Levi: I only really had three offers, and it really came down to Texas State and Texas RGV. My third offer was the University of North Texas, but I know they had a situation going on so I wasn’t going to go there. Those two were really separated and it was Coach Hill who I really built a relationship with throughout my recruiting process.

Since the first time I talked to him, he was really genuine and I felt a good vibe from him. I liked the vision he had for the school. He wanted to come here and elevate the program and put them on the map and make a name for his school again. Back in the day, we were a really good school but we haven’t been in recent years. I really wanted to take on that challenge from Coach Hill meaning coming here and elevating the program and not only letting him make a name for himself but me as well and the school. The playstyle was best for me as well. They play a fast tempo which is how I played in High School so it was a pretty easy decision.

2) What is one part of your game you’ve improved on the past three seasons?

Javon Levi: My leadership ability and being vocal; learning how to talk more. I’m a point guard so you’re supposed to be vocal, but coming into college I was more of a lead by example type of guy. One thing Coach Hill used to stay on me about was to talk more and be more vocal on the court. Now, you can’t get me to shut up on the court so that’s one thing I’ve really improved on.

Other than that, as far as skill-wise, my shooting has come a long way. You can see the improvements in my numbers as far as three-pointers and free throws. I still have more work to do don’t get my wrong, but as far as my game my shooting has become much better.

3) What was your reaction when you heard the conference and NCAA Tournaments were cancelled?

Javon Levi: I was highly disappointed honestly because you finally get to the moment that you’ve been working for all season, and you don’t even get to perform or play. You don’t feel like your season was a waste but the ultimate goal is to make the NCAA Tournament. Since I’ve been here, this was our best chance, so we all had high hopes going into the conference tournament. We won 8 of our last 10 games, we finally found our groove, and everyone was healthy. We felt like we had a really good chance of winning the conference tournament. I was highly disappointed, but safety first and everything happens for a reason. You have to move forward and go with it.

I think they could have postponed it and then see how the virus was doing after a while. Now as we see the virus is still going and getting worse, if they cancelled it after waiting then it’s ok, but at least you tried. At least give us a chance. I don’t disagree with their decision and don’t think it was the wrong decision because at the end of the day, they have to watch out for our safety and we weren’t educated on the virus so it wasn’t safe to play with no fans because we didn’t know about the virus. I think they made the best decision at the time.

4) This season, you were tied for first in all of NCAA D1 in assists per game. What do you do to always find that open teammate?

Javon Levi: Understanding the offense and understanding where everyone’s supposed to be. I know that most opponents scouts are going to be saying to not let me get in the paint and to keep me from getting to the basket. I know that once I do break down a defender or I do get in the paint, help is coming so it’s about knowing my teammates and giving them the ball in the right place in any way they feel comfortable. Of course, they finish the job. This year my assists numbers went up, but my ball dominance went up as well this year. That is part of why I created more plays and actually got to show off my passing abilities more.

5) After winning defensive player of the year twice in the conference and finishing top 11 in steals per game the past two seasons, do you believe you are the best defender in college basketball?

Javon Levi: I definitely do believe I’m the best defender in college basketball. There isn’t anyone that you could put in front of me that I don’t think I can stop. I’m not saying there haven’t been people who have scored on me or have gotten the best of me, but when it comes down to it I think I’m the best defender.

5a) Is there any player you haven’t had the chance to guard that you’d love to guard one on one?

There were a few players I would have wanted to play like Cassius Winston, Myles Powell and Devon Dotson. One player I wanted to guard who’s underrated and go up against is Jhivvan Jackson from UTSA. He’s was top 5 in scoring this year.

6) Do you feel robbed that you only made the All-Conference second team after the season you had?

Javon Levi: Yeah I felt robbed, but I’m looking at myself to understand what probably held me back from getting to first team. You have to understand the politics side of it. Me as a player, I felt like I definitely deserved to be on the first team. During the first half of conference play, we were 5th or 6th and like I said we won 8 of our last 10 games and finished third in conference play, the highest we’ve finished in years. Based on that I felt like I deserved first team but my teammate got first team and I was happy with that and it was cool. Last year, no one from our team made first team, but at least someone made first team and I’ll be gunning for that next year.

7) Who is one player you modeled your game after?

Javon Levi: Chris Paul was my favorite growing up, and (Rajon) Rondo. Someone I started to watch now and someone I’m modeling my game after now is Tony Parker. I’m starting to see a lot of my abilities as far as passing and the mid-range/floater game. That’s someone I can see myself going after because he’s a smaller guard, shifty, great passer and great IQ. I like seeing how Tony Parker gets to his spot because he’s also not the fastest so seeing how crafty he is and how he gets to different spots in different ways is someone I’ve been watching as of lately.

8) What has your team done to prepare for next season and attempt to take down the powerhouse in New Mexico State?

Javon Levi: We haven’t been able to do much yet but we still talk here and there. We all know what our goal is this year. It’s going to start with me most definitely because I’m the only four year player on the team and there’s no doubt I’m the leader of the team. Now, I have to set the tone and set the bar high for us so we know from Day 1 we’re competing with New Mexico State because I know they work hard and they aren’t taking days off. They’re locked in from the moment they arrive on campus until they’re cutting the nets down in the conference tournament.

It’s an everyday grind to reach the ultimate goal because they’re a tough team and they’re not going to beat themselves, we have to beat them when we play them. We also have to be more mentally prepared than we’ve ever been. Physically, I felt that we could have beaten New Mexico State the past two years, but we weren’t mentally prepared, and that all started with me. If we become mentally stronger, we’ll be fine, and I’ll give us a chance to beat them.

9) What is one part of your game you’ve been working on this summer for next season?

I don’t think the mid-range game is dead at all. It’s a high percentage shot in my opinion. You see players in the NBA now still killing teams on mid-range like Chris Paul, Rondo, Kawhi Leonard. Even the greats like Kobe was a midrange killer and Michael Jordan, so I don’t see why people can say the midrange game could ever be dead when some of the greatest of all time’s bread and butter was the midrange game.

There’s always politics involved and a lot of numbers involved nowadays, but no one’s telling Kawhi to stop shooting midranges because he’s hitting them at a high clip. That’s why I feel with myself, it will come down to putting in the work and starting to hit the shot more.

10) Do you have any individual or team goals for next season?

Javon Levi: For individual goals, I want to be a Mid-Major All American. I would love to be an All-American, but if not at least a Mid-Major All American. I also want to be a finalist for top point guard in the country as well. I feel like I should definitely be on that list next year. Team goals, I want to get at least 20 wins, win the conference tournament, and making the NCAA Tournament. That’s my only goals for next year, most importantly making the NCAA Tournament.