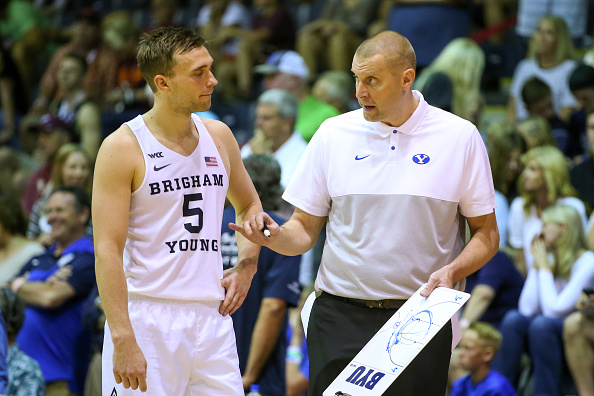 The first year as the head coach at any school can be challenging. Coaches come in with expectations laid out by the school as well as with the way they want to establish their own coaching style. Mid-major programs have different goals compared to their power conference foes. That could range from making the NCAA Tournament to just winning double-digit games. Over the next three weeks, we will take a look at coaches who just finished their first seasons at the helm of mid-major programs.

Dustin Kerns came to Appalachian State after spending two productive seasons at Presbyterian. Kerns subsequently coached the Mountaineers to their best season in ten years. Appalachian State had a winning record in non-conference play for the first time since 2006-07, and its 11 conference wins are the most ever as a member of the Sun Belt. This resurgence under Kerns is not surprising, as he did similar things in his time at Presbyterian. He has three-star point guard Xavion Brown highlighting the incoming recruiting class. He also has a pair of four-star and three-star recruits interested in the 2021 class. Kerns is a rising coach in the mid-major ranks, and Appalachian State fans should be excited for their future.

Casey Alexander is no stranger to success, having produced some of the basketball in school history at crosstown rival Lipscomb prior to coming to Belmont. In returning to his alma mater, he picked up where Rick Byrd left off. Alexander guided the Bruins to another regular-season and conference tournament title, leading them to the NCAA Tournament in his first season. His 26 wins were the most by any first-year head coach this past year, and the highlight of their non-conference schedule included a win on the road against Boston College. On the recruiting end, Alexander has three-star center Even Brauns leading the incoming class.

Jim Whitesell was promoted to Buffalo’s head coach after Nate Oats left for Alabama. He was the associate head coach before, helping in recruiting such players as C.J. Massinburg to the program. He became the second coach in school history to win at least 20 games in his first season. Highlights included his team leading the nation in rebounding and handing DePaul their first loss of the season when they were one of the few remaining undefeated teams left. Point guard Chanse Robinson, a three or four-star recruit depending on the publication, headlines the 2020 Bulls’ class.

Mark Pope brought BYU to the national stage in his first season at the helm. He led the Cougars to their first top 25 ranking in nine years, winning the most games by a first-year head coach in school history along the way. Pope coached BYU to wins over Houston, UCLA, Virginia Tech, and Utah State. However, the biggest win came in defeating Gonzaga late in the season. He would have had BYU dancing with a single-digit seed and a real chance at playing on the second weekend of the tournament. It sure feels like the school has the right leader in Provo.

John Smith is in his first year as a head coach at the Division I level, coming to Cal Poly known for his recruiting. He had his team play the toughest schedule in the league, focusing on defense as the Mustangs led the league in steals per game. Smith did guide his team to a win over eventual MAAC champion Siena. Time will tell if he can recruit at Cal Poly, a school that focuses on academics first. 2021 four-star shooting guard Jahmai Mashack does have interest, and a player like that could change the program.

Mike Schrage is another first-year head coach in Division I. He was an assistant at power programs such as Ohio State, Butler, and Duke prior to this. Schrage led Elon to a 7-4 record over February and March, including an upset of two-seed William & Mary in the conference tournament. He has a tough task ahead of him, as Elon has only had four seasons over .500 in 21 years as a Division I program. Schrage has three-star small forward JaDun Michael coming in, and more talent like that will be needed to compete in the CAA.

Jay Young continues the trend of first-year Division I coaches, coming to Fairfield after spending three seasons as an assistant at Rutgers. He is hoping to bring improvement to the Stags like he did for the Scarlet Knights. In year one, he coached Fairfield to wins over Texas A&M and second-place finisher St. Peter’s. However, most league games were not close, and the Stags were ranked 349th in offensive scoring average. Two three-star recruits in the 2021 class have interest, meaning a program-changing player could find their way to Connecticut.

Jamion Christian is no stranger to success, having taken his alma mater Mount St. Mary’s to two NCAA Tournaments in six seasons. He spent one season at Siena prior to taking this job, also guiding the Saints to an improved season. Year one was a little tougher in Washington D.C., though that is expected given the rise in competition in the Atlantic 10. Still, there were flashes of improvement, and incoming LSU transfer James Bishop will help even more in the coming years. The biggest thing for Christian is showing that the Colonials are taking another step forward in competing in the league next season.

Rob Lanier had big shoes to fill when Ron Hunter left for Tulane. By Georgia State standards, this was a down year. However, the Panthers were postseason eligible once again and competitive in the Sun Belt. Lanier has the program reloading with three-star guards Evan Johnson and Collin Moore set to be on the roster next season. He also has a four-star recruit from the 2021 class on the radar. Georgia State is in good shape to continue to play a major role in mid-major basketball.

Brett Nelson landed his first head coaching gig after serving as an assistant at Marquette. He came to Holy Cross knowing that the program needs a major rebuild. The Crusaders have not had a winning season in six years, even with their miracle NCAA Tournament berth a few seasons ago. Nelson oversaw a young team in year one, and that pattern will continue with six incoming freshmen. However, while the learning curve will be high, it provides Nelson a chance to truly shape the program in his image.

Kenneth Blakeney is another first-year head coach in for a full rebuild. Howard has not been to the NCAA Tournament in 28 years. It will take baby steps to take the Bison back to competitiveness in the MEAC. However, the future may be bright, as Blakeney coached Wayne Bristol Jr. to the conference’s rookie of the year honor in year one. Five-star guard Trevor Keels of the 2021 class has shown interest, and landing a player like that would certainly allow Blakeney to put his stamp on the program.

Zac Claus coached under the interim tag until February, being given the official title then. He guided the Vandals to a three-win improvement from last season and coached them to an upset of conference champion Eastern Washington. Still, Claus has his work cut out for him, as Idaho was sub-300 in both offensive and defensive rating. Building the Vandals back into Big Sky contenders is going to take time.

Ryan Looney took over his first Division I program after finding success at Division II. While the record is not great, he did coach the Bengals to their first conference tournament win in 11 years. Small improvements like that should be celebrated, as Idaho State has only finished over .500 once since 2000. This is another hard place to win, but continuing to be competitive in the league should be Looney’s goal in year two.

Billy Donlon was back in the saddle after previously leading Wright State four years ago. 16 wins are the second-most by a first-year coach in program history, while this was just the third winning season in the past decade. The eight conference wins were also the most while competing in the WAC. Donlon’s second year will take place in the Summit League, where the Kangaroos should be competitive right away. He can make his mark by taking the Roos to their first-ever NCAA Tournament.

Amir Abdur-Rahim knew what he was getting into at Kennesaw State. After all, the Owls have never had a winning season as a Division I program. Still, 1-28 is the worst finish in school history. Abdur-Rahim saw his squad finish ranked sub-340 in offensive and defensive rating. He has seen success as an assistant at Texas A&M and Murray State, and he will need that to build Kennesaw State from the ground up.