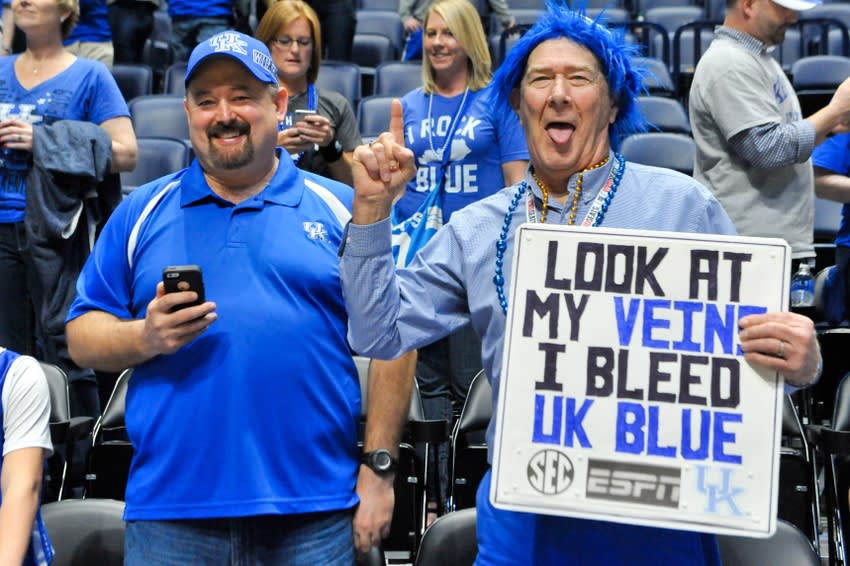 Behind every great college basketball program is a great fan base. What makes college sports so special, especially hoops, is the support the teams receive from students, alumni, and fans around the country. Home court is pivotal in college basketball, and creates an advantage unlike any other in sports due to the passion each fan base brings to games.

With that being said, some teams have larger and more passionate fan support than others. There are some teams in college hoops that are intimidating to play on their home floor whether or not the team is very good just because of the support they receive.

Of course, for any college team, road games are much more difficult to play than home games. But depending on the opponent, this difference in difficulty can vary greatly.

Some of the league’s best fan bases are Indiana, Syracuse, North Carolina, Louisville, and Tennessee, to name a few. However, even these passionate fans do not stack up to our top five fans in college hoops.

Pittsburgh has not been great in recent years, although things are looking up for the Panthers next season. Despite lack of success in recent past, the Zoo remains one of the craziest student sections in the country. Pittsburgh always packs it’s seats and creates a difficult place to play for any opponent. Even through the down years, the fans still support the program with great vigor, proving the loyalty on top of the passion. For any opposing coach or team, seeing a game at the Peterson Event Center is not a fun sight.

The IZZONE may take the cake as the craziest student section in the country. Year after year, Tom Izzo brings great talent in to maintain the program, which is elite almost every year. The fans in East Lansing reward him, as they cheer loudly and give the Spartans a great advantage during every home game, even though with their talent they might not need it.

Although small, Cameron Indoor gets loud. The Cameron Crazies wait outside the venue before every home game in Krzyzewskiville to try to snag one of a select number of tickets just to see their Blue Devils in action. Duke’s success helps, but even in a down year, the Crazies are always there, waving their hands at an inbounds thrower and chanting at opposing players. They even make handouts for big games on what to taunt the opposing team on.

The Jayhawks have one of, if not the, most storied programs in college basketball. It is almost impossible to go into Allen Fieldhouse and steal a win from Bill Self’s squad. The incredible tradition of the program adds a sense of history to the fan base, yet every year new students roll in to the University and maintain the same energy that packed the seats in years prior. The “Rock Chalk” chant is one of the most unique and storied chants in the world, let alone college basketball.

Big Blue Nation takes the top spot on our list, and for good reason. Basketball is a way of life in Lexington, and the fans of Kentucky live and die with their Wildcats. Kentucky is always a top program, and has some of the best recruits every season. This sustained excellence helps with the support the team gets, but the reason BBN is the top of this list is because of the passion the fans have for their team. Kentucky fans are found all around the country, and all have the same energy towards basketball. Rupp Arena has the largest capacity of any single sport venue in the country, and goes head to head with the Carrier Dome every year for highest attendance. For an opponent traveling to Lexington, hopes are never too high to steal a win, mostly due to the energy brought by the fans.