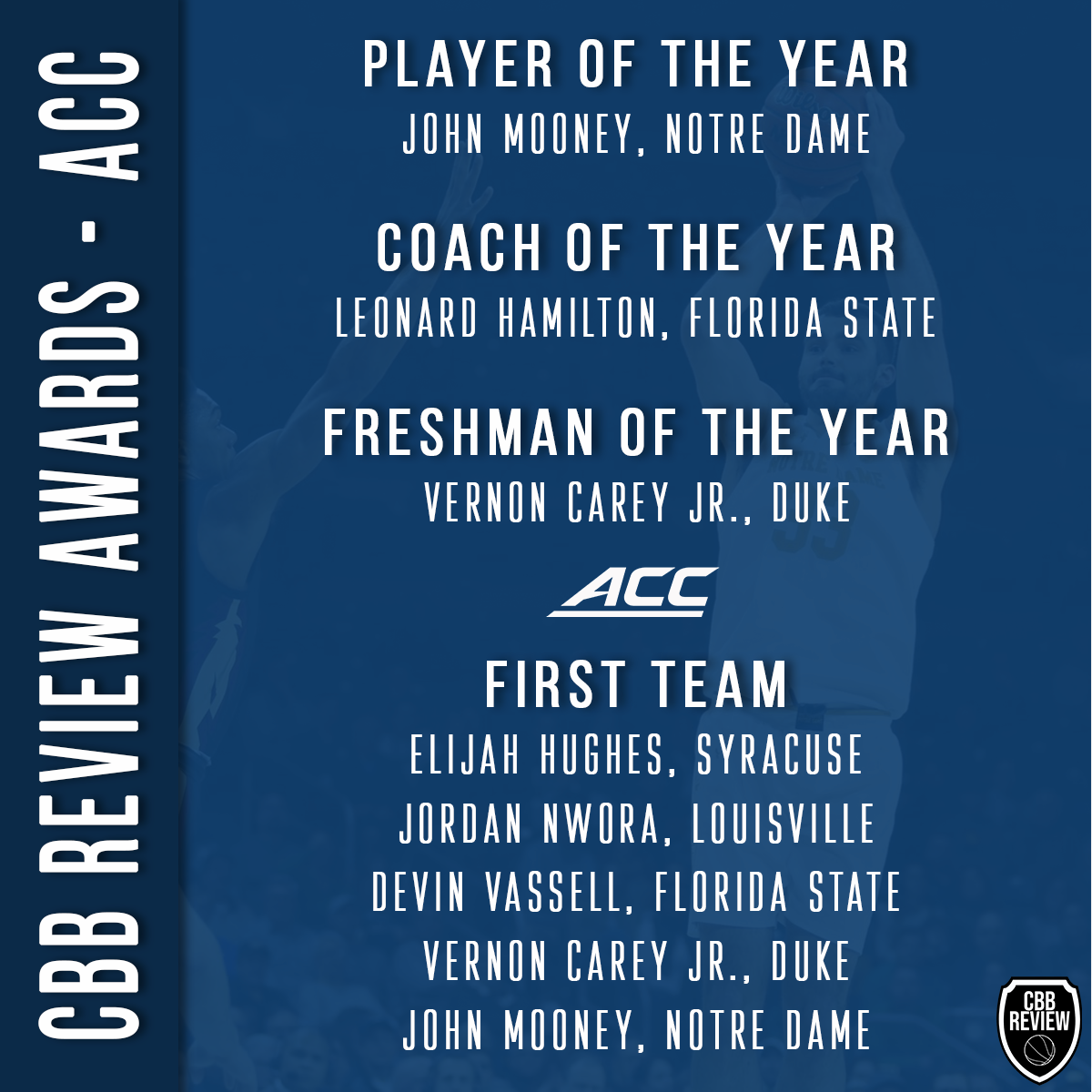 A down year for what usually is college basketball’s most dominant conference has provided some interesting storylines thus far. Florida State has quietly crept into being a national powerhouse. UNC, despite having freshman sensation Cole Anthony, finished last in the ACC. And Georgia Tech finished fifth in the league, which is a surprise in its own.

The regular season came to a close only a few days ago, and the official all-ACC teams were released on Monday. The tournament is expected to tip off on Tuesday afternoon in Greensboro, with UNC facing VT. Below is our all-ACC teams, as well as awards, followed by an in depth breakdown and prediction of the entire ACCT bracket.

Arguably the two worst teams in the league kick off play in Greensboro today, and it will be a very close, sloppy game. Pittsburgh has the capability to get hot from outside against poor defenses, but tends to miss their shots when paint pressure is at a minimum. Wake’s Olivier Sarr, who averages almost nine boards per contest, could be a big factor in this game, as well as his teammate Brandon Childress, who averages 15.5 points per game.

Virginia Tech looked as if they would be the leagues surprise during non conference play, but quickly fell off the radar and slipped to the bottom half of the league. Needless to say, UNC had quite a disappointing year, finishing below .500 in league play for the first time under Roy Williams. However, a lot of those losses were close, and a lot of those losses came without Cole Anthony. UNC is the most dangerous 14 seed in the history of the league.

With Georgia Tech on probation, NC State falls as the fifth seed in the tournament, and will face off against Wake Forest if the above prediction holds true. NC State is well coached, and has a lot of talent, but has trouble executing in big spots. However, the Wolfpack are playing for a spot in the field of 68. So there’s some extra motivation for Markell Johnson and co.

John Mooney should dominate this game. Nik Popovic does not nearly have the footwork and capability on defense to guard Mooney, so Mooney should get on the board at will. TJ Gibbs will be tasked with guarding Derryck Thornton, who shoots below 40% from the field. The Fighting Irish should take care of business here.

This has the chance to be one of the best games in Greensboro. Both teams love to run, shoot the ball a lot, and have gifted play makers. UNC and Syracuse have similar rosters, but the Orange have caught more breaks than Roy Williams’ squad. The difference in this game is which star steps up most: Cole Anthony or Elijah Hughes. Cole Anthony, it’s time to prove you’re still a lottery pick.

The Seminoles have grabbed national attention and have had a dominant season thus far. Devin Vassell and Trent Forest lead the way, but what separates the Seminoles from other teams is their balance. Clemson does not have the firepower to defend that, nor score at will against it.

Duke clearly does not have the super stars it had last year, and has had its difficulties this season. Tre Jones has found his shot, however, and Vernon Carey Jr. is a beast inside. Duke is deeper than years past, which could make the slightest difference in this expected close game.

Virginia has had an immaculate turnaround this year. What seemed to be a year in which the Cavaliers would miss the tournament completely, Virginia is now a lock and has a chance to make it up to the four line. Mamadi Diakite is Virginia’s leading scorer, but Kihei Clark runs the offense, and has matured as the year has progressed. The defense should be able to limit Mooney in this game, however, if TJ Gibbs starts lighting it up, Virginia could be heading home early. Tomas Woldentensae could be the key in this game.

Can the Tar Heels make history and play five games in five days? It’s quite possible. Jordan Nwora says otherwise. Nwora has the most potential out of anyone in the ACC, and his quick release makes him impossible to guard. Steven Enoch can dominate the paint, shooting over defenders much bigger than him. Garrison Brooks has had an amazing year, but if he cannot stop Enoch, it will be a long third day for UNC.

Florida State is the better team in this matchup. They may not have better talent, but they play as the better team. However, the Seminoles have championship aspirations this year, not just in Greensboro, but in Atlanta. And ACC teams who win it all do not have good track records with winning the ACCT. The Noles might drop this game, but it could be worth it in the long run.

In the rubber match of the season, Louisville looks to have its revenge on the Cavaliers. Louisville won at the Yum! Center, while Virginia won at JPJ. The difference in those games? Louisville’s win was high scoring, Virginia’s was a defensive slug fest. Without a crowd behind them, Virginia will have trouble stifling Nwora and Ryan McMahon from beyond the arc. Their offense may be able to keep up, but in a high scoring affair, Louisville has the upper hand.

This will be a fun game for fans around the country. Tre Jones will have a huge game if this finals matchup comes to fruition. However, Duke’s defense will have trouble, both inside and out, with Louisville’s juggernaut of an offense. It will come down to a one possession game, and Jordan Nwora will prove how valuable he is in the ACC, and potentially on an NBA roster next season.