No. 19 Ohio State uses strong second half to defeat No. 23 Illinois 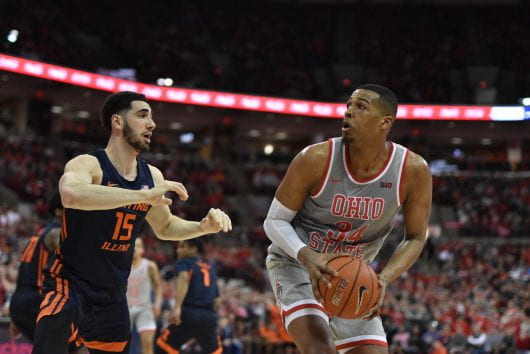 On Thursday night, Illinois traveled to Columbus to take on the Ohio State Buckeyes. A win would give the Illini a share of first place in the Big Ten.

This was Ohio State’s final home game of the season. For the Buckeyes, Andre Wesson and Danny Hummer celebrated their Senior Night. Hummer and Wesson both started for the Buckeyes. Hummer scored two points in his first career college start.

Although both of their big men were in foul trouble early, the Illini controlled the game for the majority of the first half.

Ayo Dosunmu led the Illini with 14 points at the end of the half. Illinois led by a score of 37-30 heading into halftime.

Ohio State started the second half on a 10-2 run to take their first lead since 16:40 left in the first half. But Illinois was able to keep it close for most of the second half.

An Andres Feliz layup with 1:27 left cut the Buckeyes lead to five. But E.J. Liddell’s tip-in with 1:03 left made it a three score game.

Ohio State was able to make free throws down the stretch and went on to win the game with a final score of 71-63.

The Buckeyes will next travel to Michigan State on Saturday, while Illinois will host Iowa on Saturday for their Senior Night.