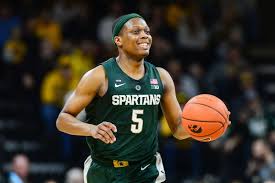 This game was big for the Spartans and it proved that they can play tough in the worst scenarios given to them. They seemed like they couldn’t keep up with Penn State in the beginning when they were down 19 at one point, however, they managed to pull off an incredible 24-3 run stretching from the end of the first half to the middle of the second half. This game means a lot in terms of the race of the Big Ten title and seeding for the tournament, however, both are locks for the NCAA Tournament and will undoubtedly perform well in a couple of weeks.

For the Spartans, Xavier Tillman put up a career night against the Nittany Lions in an efficient manner scoring 23 points on 10 of 13 shooting. Right behind him were Rocket Watts (18 points) and Cassius Winston (14 points and 7 assists) coming up clutch at the end of the game. For the Nittany Lions, Myreon Jones led the team with 16 points and Lamar Stevens had 15 despite shooting an abysmal 3 of 19 from the field.

The Spartans won because they were able to rebound and keep their heads up even though they were down big in the beginning. Having this win will most certainly assure them of their ability to fight hard when the tournament comes around. The Nittany Lions lost because they were unable to rebound at crucial times and they were not able to use their possessions as efficiently as possible with many lost balls and shot clock violations. The 1st half Penn State and 2nd half Spartans were two amazing teams who could win the entire tournament if they shot and played as well as they could during their respective halves.

In the end, a statement win for Michigan State and still a good game for the Nittany Lions as it shows them what they need to improve on. Both teams should be ready to go at their conference tournament and the national tournament as well.

(Cover Image Credit: The Only Colors)