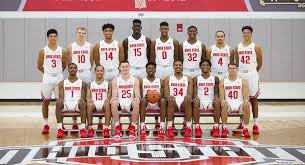 What a finish for the Ohio State Buckeyes as they defeat the Kentucky Wildcats 71-65.

The first half was a back to back shoot-off with many lead changes and big shots that turned the tide of the game. The second half, on the other hand, was a different story. Ohio State built a minuscule lead but somehow ran with it and kept control during the entire second half of the game. In the end, it seemed as if Kentucky couldn’t manage the time effectively to get enough fouls in to start building their lead back. As the lead built up for the Buckeyes, the hopes for the Wildcats slowly diminished. In the end, it was a 6 point victory for the Buckeyes who look to take on West Virginia next week and the Wildcats will take on Louisville next week as well.

It was D.J. Carton off the bench that led the Buckeyes to their 6 point victory with 15 points off the bench and 2 blocks. Both Kyle Young and Kaleb Wesson had 10 points for Ohio State as well. For the Wildcats, 3 people scored in high double figures in Tyrese Maxey, Ashton Hagans, and Nick Sestina with 15, 14, and 17 points respectively. Notably, Hagans also put up 9 assists and 3 steals.