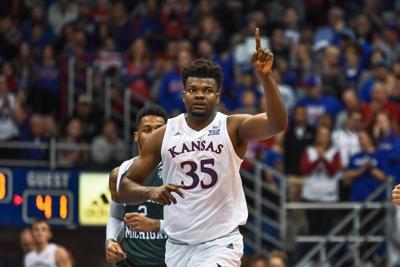 The Big 12 was far from predictable last season, shocking many people. For starters, the Kansas Jayhawks’ Big 12 title streak of 14 seasons in a row finally came to an end, with Texas Tech and Kansas State sharing that title. West Virginia, who were projected to be a top 3 team in the Big 12, finished 10th. In the tournament, 6 teams represented the conference; Kansas, Texas Tech, Kansas State, Oklahoma, Iowa State, and Baylor. Of those 6, only one made it to the sweet 16, a disappointing season for a conference typically filled with success.

This season is filled with a lot of questions. The biggest one, of course, is what punishment Kansas will be handed and how it will affect their season. Others include how teams will recover after losing their top players like Kansas State, and if any middle of the pack teams will rise due to that.

This one is really a no brainer. Kansas brought back two of the top players in the country in Devon Dotson and Udoka Azubuike, and now has a reinstated Silvio de Sousa, who was a factor in their final four season.

Tech lost some pieces, but they have one of the best coaches in college basketball in Chris Beard and a super talented freshman Jahmius Ramsey.

Baylor will have a healthy Tristan Clark, and return most of their key players. Watch out for them to be a sneaky team this year.

Tyrese Haliburton is one of the more talented players Iowa State has ever had, and they picked up quality grad transfers to ensure another postseason run.

This might seem like a surprise pick, but West Virginia’s frontcourt is quietly one of the best in the country. Point guard Jordan McCabe took a big step forward toward the end of the season and you can never count out Coach Huggins.

After a below-average season last year, Oklahoma State returns all five starters, who should be a lot more successful with another year of experience under their belts.

Texas once again will disappoint despite being a power school. The team has a solid backcourt, but not enough to be better than the 6 teams ahead of them. Don’t be surprised if this is Shaka Smart’s last season with the team

Losing Christian James was big for them, and the Sooners will need Brady Manek to step up if they want to have any success and make the tournament.

The Wildcats lose their two leaders Barry Brown and Dean Wade to the draft, but still, have Xavier Sneed and Cartier Diarra. It’ll be difficult to see this team finish any higher than 7th in the conference after the losses of their two best players.

Like Kansas State, TCU loses two important players in Jaylen Fisher and Kouat Noi, but return Desmond Bane. Unless Bane and center Kevin Samuel breakout, TCU will be the bottom feeders of the Big 12.