Michigan is once again…….. FABULOUS! 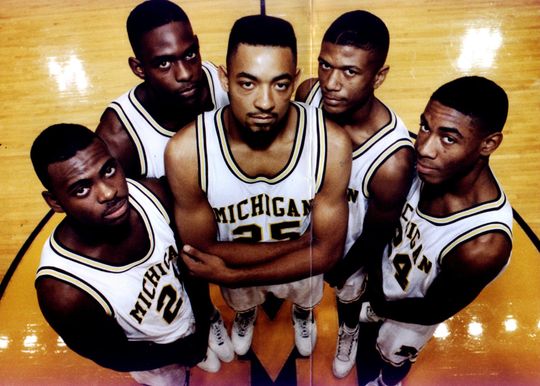 Juwan Howard, a NBA journeyman who spent 9 years in South Beach and won two NBA Championships as a player with the Miami Heat, has a resting place…..at least for five years anyway.  Howard has been hired to lead the Michigan Wolverine basketball program after previous head coach John Beilein left to coach the Cleveland Cavaliers of the NBA.

Juwan Howard is no stranger to this Wolverine basketball program…….instead you could say that the program he now leads…. is his return back home.

Chris Webber, Ray Jackson, Jalen Rose, Jimmy King and Juwan Howard.   The FAB FIVE… never to be forgotten in the lores of Michigan basketball.  For all that John Beilein has done for the Michigan basketball program in the past decade…. there will never be another group like such was in Ann Arbor when the Fab Five came to town.  The baggy shorts, the swagger and the ultra competitive desire to win.  To diehard basketball fans like myself, they are as iconic in the game of basketball as Michael Jordan, all of the Bulls teams of the 90s, Larry Bird and the Celtics of the 80’s as well as Magic Johnson and the Lakers of the 80’s.  What do all of these teams have in common?  They did it their own way and didn’t let anyone stop them.  Lots of people will talk down about the FAB FIVE but unlike what some people may think…. what made these five individuals great wasn’t what they did outside of the game….but what they did for the game.  They revolutionized and evolutionized the game all at the same time…. and they did it in Ann Arbor.

So…. this bears the question.  What will the Wolverine program be like under one of the Fab Five’s greatest?  Will it have the swagger and the style that it had under the Fab Five and Steve Fisher or will they be a more subtle brand under Juwan Howard?

It bears an interesting question.  The Fab Five took place during the early 1990’s… in a time when the graduates of today were only a twinkle in their momma’s eyes.  Now nearly 30 years later…….wow… nearly 30 years…… what history lessons will be taught on the Ann Arbor campus?  Who will some of the visiting professors be in their basketball lockerroom?  John Beilein?  Jalen Rose?  Jimmy Jackson?  Chris Webber? Jimmy King?  Like Georgetown, Michigan went after one of its greatest basketball alumni to lead its program because ……. well…….. if anyone understands…. Howard clearly understands what being a Wolverine under the brightest of lights and the smallest of microscopes is all about.

Patrick Ewing coaching at Georgetown?  Why not hire him?  He knows what the greatness of Georgetown is like and what the people strive to have in D.C..  Coach K doesn’t just keep around his former players because they were good players…. he keeps them at Duke because they understand what it means to be a Duke Blue Devil.

There is a certain amount of pride, confidence, and understanding that has went into a lot of the hiring processes at some of the biggest university names in college basketball.  And for good reason.

We are entering an era…… and a generation of young people ..who know all of their stars and the history of their greatest basketball programs through social media platforms.  Go to the ESPN+ program… watch all you want to know about the FAB FIVE.  Go on instagram and find out all you want to know about any of your favorite college or pro athletes.

Want to recruit some players to Michigan now and throw a little swagger with it?   Juwan Howard has the resources.

Want Michigan look like the most amazing destination for a college basketball player that has dreams of going to a national championship game?  Howard has been there and done that.

Want to know what it means not just to make the league but to stay there for a long period of time and be very successful there?  Howard is your man.

Want to know what I think of Michigan hiring Juwan Howard as the leader of their basketball program?   Dang smart!

Now the true telling of a great coach will be this…. how great of a teacher will Howard be for his players and who will he surround himself with on the bench?  Like Jesus in the Bible…. Howard needs some great disciples who know how to teach because a great leader knows how to delegate.

We all know how great of a player that Juwan Howard was for the Michigan program and how he will forever be known in the lore of basketball as a member of its FAB FIVE.  Now the question is this….. how fabulous will Michigan be now that one part of fabulous has returned home?

If this becomes as great of a hire for Michigan as most people, including myself, thinks it will be?   Get ready to hear this many, many, many times in the arena in Ann Arbor: