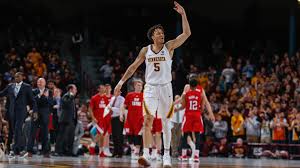 In the first game of the first round, Richard Pitino’s seventh seeded Golden Gophers defeated tenth seeded Louisville 86-76. The Gophers controlled the game from tip, as their front line of Jordan Murphy and Daniel Oturu gave the Cardinals trouble all afternoon.

The Gophers took at five point lead into the locker room, outscoring the Cardinals 38-33 in the first half.

With the win, the Gophers will face the winner of Michigan State/Bradley (Saturday time TBD). After sitting squarely on the bubble for the majority of the season, Richard Pitino’s bunch has certainly gained momentum over the past two weekends. If indeed they face the second seeded Michigan State Spartans, they will certainly be familiar with their opponent. In their only meeting this season, the Gophers got blown out in the Breslin Center, 79-55. March is always different, and there is no reason to count this Gopher team.