Despite Brave Effort by Bradley, the Spartans of Michigan State Survive! 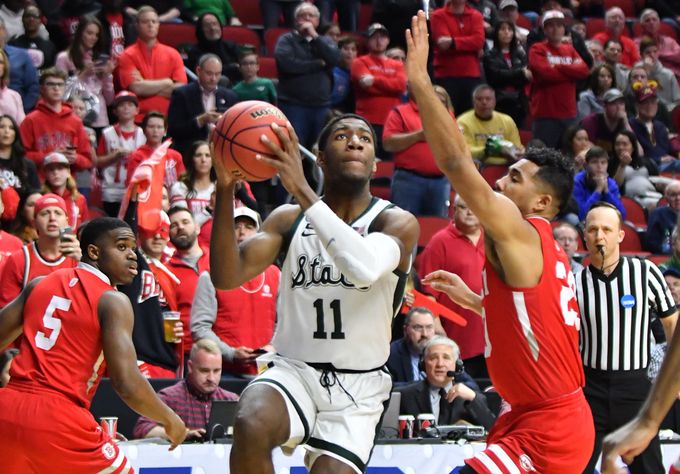 The setting was Wells Fargo Arena in Des Moines, Iowa.  The Big 10 Tournament Champions came to town…. and so did the Bradley Braves.  The Braves from the Missouri  Valley Conference gave the Spartans everything they could handle for about 37 minutes of play before the inside presence of Michigan State took its toil.

Despite being led by Darrell Brown, Elijah Childs and Dwayne Lautier-Ogunleye (who scored 17, 19 and 14 respectively for Bradley), the Bradley Braves fought as proudly as their name and nearly pulled off one of the biggest upsets of the tournament thus far.

The Michigan State Spartans were outshot by the Braves from the perimeter in the first half as Bradley hit over 60 percent from three point land and went into the break with a 35-34 lead over the Spartans.

The halftime speech must have been one for the ages from Tom Izzo.  The Spartans came out of the lockerroom and began to take it to the Braves. Guard Cassius Winston, who led the Spartans with 26 points, began his assault of the Bradley defense going at the rim while also feeding his big guys on the interior. One of those guys being Xavier Tillman, a strong inside power forward who led the Spartans with not only double figure points with 16 but also double figure rebounds with 11.

The game looked to slowly being put away by the Spartans as they led Bradley 50-42 with 14 minutes left in the game.  Bradley, with relentless hustle and a never say die attitude went on an 8-0 run and cut the Spartan lead to two off some very careless passes by the Spartans in the full court.

Tom Izzo, known for his intensity in any game, let it be known to his player Aaron Henry,  that tournament time was not a time for mediocre play as he was in the face of the Spartan freshman until the end of a timeout.

After the timeout by Izzo, the Braves took one last shot at the Spartans with an excellent smothering defense that kept the Spartan guards at bay and giving Bradley some opportunities to take a lead on Michigan State.

Key shots by Spartan guard Matt McQuaid, who also was a double figure scorer for the Spartans with 10 points,kept that from happening down the stretch and helped the Spartans pull away from the Braves and reserve their spot in the round of 32.

Michigan State, for the game, led the Bradley Braves in two important areas that have always been a strength for them come tournament time:  free throws and rebounds on the glass.   Michigan State won the rebounding battle 36-26 also winning the rebounds where they count…. on the offensive glass 8-3.

The Spartans shot an excellent 25 out of 26 from the free throw line for a 96 percent average which in any game, regular season or tournament, gives you a great chance to win.

Next up for the Spartans, a game with their Big 10 foes from Minnesota.  The Golden Gophers defeated the Louisville Cardinals to earn a shot at the Spartans in a NCAA Round of 32 contest.  Tom Izzo wasn’t exactly pleased with facing a Big 10 opponent in the second round but said, “It is what it is.”

Apocalyptic moment of the tournament:  The Minnesota Golden Gophers defeated the Louisville Cardinals.  The Louisville Cardinals who were formerly coached by the fired Rick Pitino.   The coach of the Minnesota Golden Gophers who defeated Louisville today?  Richard Pitino… the son of Rick Pitino.  Somewhere you have to think that Rick is sitting in Greece eating a gyro and smiling in the Mediterranean sun.