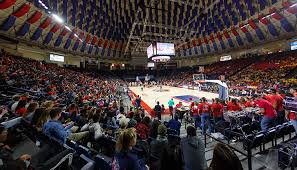 The Liberty Flames defeated the Lipscomb Bison 74-68 Sunday afternoon to claim the Atlantic Sun Championship. The Flames 28-6 (14-2) will be heading back to the NCAA Tournament, their fourth appearance in school history and first as a member of the Atlantic Sun.

The Flames were led by junior forward Scottie James, who finished the afternoon with 17 points on 7-10 shooting. Georgie Pacheco-Ortiz also added 16 points on 6-11 shooting.

The Flames took a 29-28 lead into the locker room, and outscored the Bison 45-40 in the second half.

As for Lipscomb 25-7 (14-2), the Bison fail to secure back-to-back tournament appearances, and are looking towards an N.I.T. bid. Unfortunate to not be able to watch Garrison Matthews in the tournament, but credit to the Flames. Ritchie McKay’s bunch has the makings of a Cinderella team, and will most likely be in the 13-15 seed range. Selection Sunday will be a fun one for the Flames.