Bubble Watch: The Case Against Temple 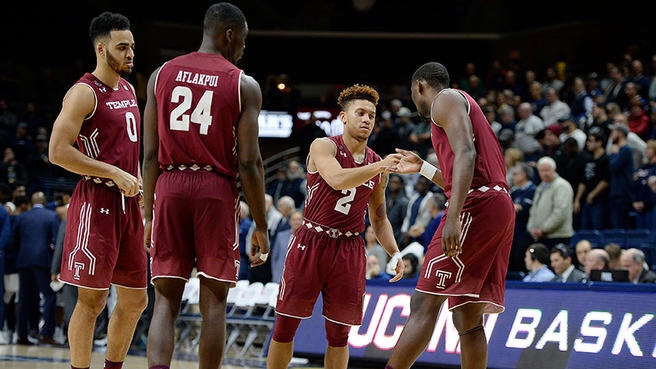 The Temple Owls, currently sitting at 20-7, 10-5 in the American, currently sit on the elusive bubble of the NCAA Tournament field of 68. Although Temple’s record is one of the better on the bubble, it holds one win in three games versus top 25 opponents, making Temple a questionable selection for the committee.

In November, Temple scheduled three games versus power 6 foes. However, these opponents did not provide the Owls with as much credit as they may have thought it would when the schedule was released. They defeated current 10-17 Georgia by a mere 4 points, 12-15 Missouri by 2, and 5-22 California by 17. Temple had a chance to get an early resume booster, but it fell by 6 at 22-6 VCU.

Temple’s only quality non conference came in December, when it defeated Davidson in overtime on a neutral floor. The Owls failed to pick up a win over Villanova earlier in the month, losing by 10 to the defending national champions.

Conference play began for the Owls with a 5 point loss to UCF, who currently sits at 20-6. After an overtime win over Wichita State, Temple played host to then undefeated Houston, and picked up its best win of the season with a 73-69 upset. Later in January, Temple picked up its worst loss, falling to sixth place Ivy League UPenn by 7 on the Owls home floor. On the last day of the month, Temple had a chance to complete a season sweep of Houston, but dropped the 7 point contest on the road.

February has not treated the Owls well, as they lost to Tulsa and Memphis without adding any quality wins. Temple has three remaining games, and the last chance to boost its resume will come March 9th at home versus UCF.

Despite the Owls strong record, its lack of quality wins gives the committee a reason to hesitate when calling Temple’s name. The Owls sit at 1-2 against AP top 25 teams, and only have 2 wins over possible tournament caliber teams. In addition, losses to 4 teams out of the field is worrisome for the Owls.

Computer rankings don’t favor Temple, either. They currently sit at 74 on KenPom, 57 on Barttokvik, and 56 in the NET. Without winning their conference, Temple has little chance to boost those rankings, leaving them out of the field of 68.

There’s not much Temple could have done to impress the committee this season. 3 games against the top 25 does not shape up to be a resume helping schedule, and failing to win two of those games fell out of the Owls hands. As of right now, Temple would have to win the American to make the field this season.