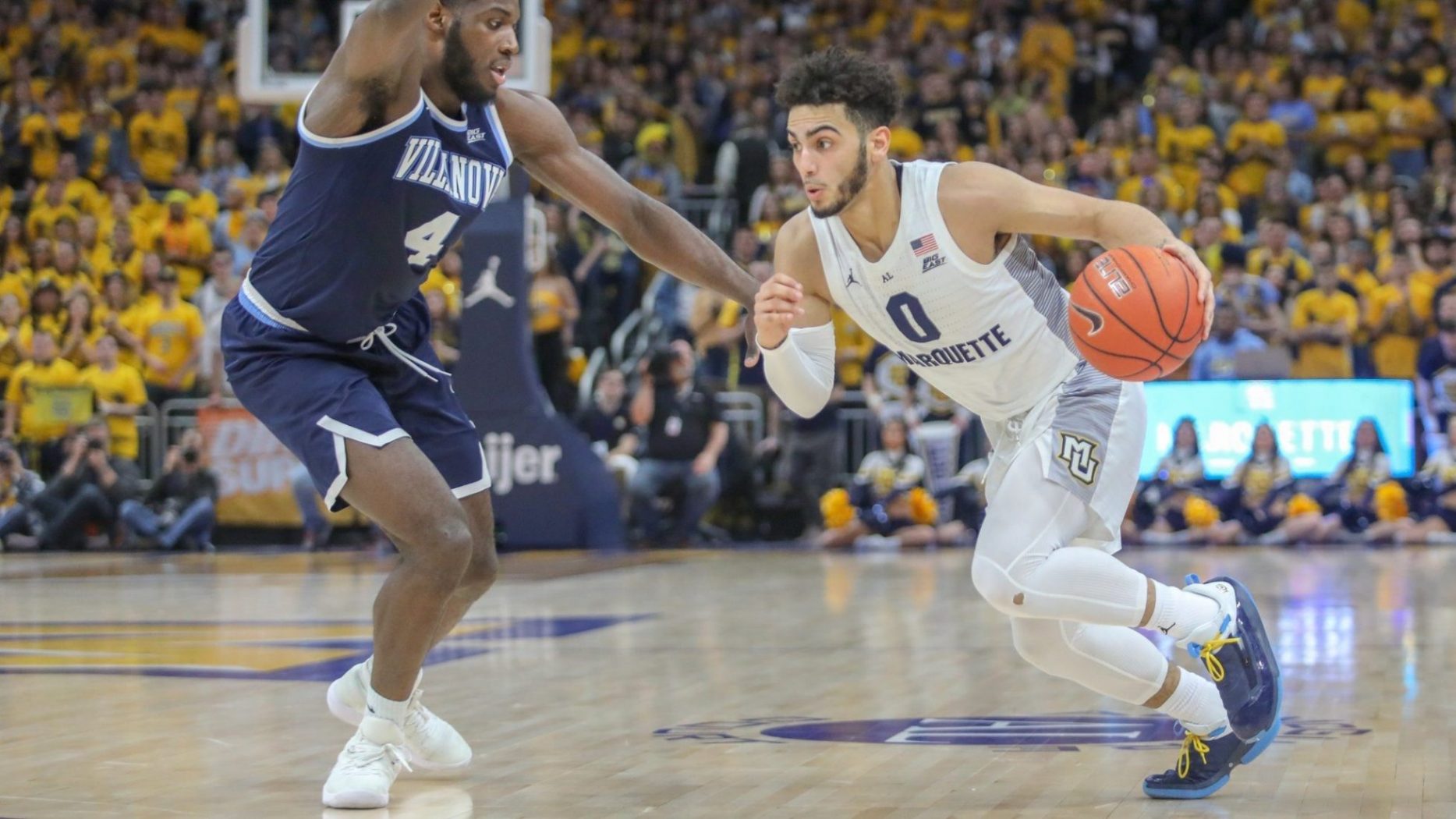 Entering the day Marquette was ranked #10 in the country and earned a 3 seed (12 overall) in the selection committees revealing of the top 16 teams as of now in this years bracket. Villanova on the other hand was ranked #14 in the country and missed out on the top 16 according to the selection committee after being in the talk for a 4 seed. The one thing Villanova had over Marquette was a two game lead in the Big East standings. Villanova had won 12 of the last 13 in the match up but neither team would give up on this one as the game came down to a last second shot with Marquette coming out on top.

In the first half the two teams battled back and forth with both teams giving blow after blow to one another. Marquette would open a lead just to see Villanova close the gap and stay right with them. Markus Howard was hot in the first half shooting 4-8 from behind the arc and finishing the half with 21 points. Marquette though was held in check as both Joey and Sam Hauser were held scoreless in the first half.

With the Wildcats keeping the game close, Marquette wanted nothing to do with them they came out of the locker room making their first six shots from the field to open up a 10 point lead. Villanova looked to be losing control of the game and saw a deficiet of 15 after Marquette capped of a 17-9 run in the first 8:00 minutes of the first half.

Villanova would not be stopped however, as they answered with an 7-0 run to cut Marquette’s lead to 47-42 with 9:33 remaining in the game. Shortly after Marquette looked to regain control Villanova answered again with an 11-0 run finished off with a Jermaine Samuels 3-point basket and a 55-52 lead. It was Villanova’s first lead of the game since the game was 5-2.

After giving up the lead and Theo John picking up his fifth foul for Marquette with 4:51 to play, the pressure was entirely on the Golden Eagles as the home team. Marquette responded with a 12-4 run opening up a 64-57 with 3:09 to play.

Villanova trimmed the lead back to one, 64-63 with 1:36 remaining and after two free throws by Markus Howard Phil Booth answered once trimming the lead to 66-65 with 0:45 remaining. With enough time remaining and a one possession game Villanova elected not to foul and allowed Markus Howard to dribble down the shot clock. As he began to make his move Saddiq Bey poked the ball away and coming up with the steal to Villanova a chance to win the game. After a Wildcats timeout Phil Booth drove the lane and passed out to Jermaine Samuels who threw up a prayer that wouldn’t fall giving Marquette a 66-65 victory.

Markus Howard finished the game with 38 points and Sacar Anim picked up the struggling Hauser brothers with 18 of his own for Marquette. Howard moved from 10th on Marquette’s all-time scoring list to 5th place. Villanova shot 7-15 from three in the second half but it wasn’t enough. Phil Booth finished with 19 and Eric Paschall added 17.

The Victory for Marquette keeps their hopes alive for a Big East championship as they move to 9-2 trailing Villanovova (10-1) only by one game with the rematch scheduled for February 27 at Villanova.

Villanova will look to get back on track when they host Providence on Wednesday, February 13.

Marquette will look to keep pace with the Wildcats on the road at DePual on Tuesday, February 12. As Markus Howard will continue to