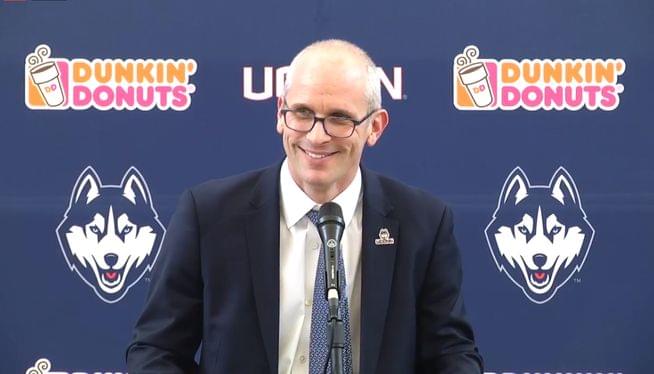 The atmosphere surrounding the UConn Mens team for the past two years has been flat. The team started the 2016-2017 season ranked #18 and full of hype. They proceeded to lose to Wagner and Northeastern at Gampel Pavillion to start the season 0-2. Injuries plagued the team the rest of the season and they finished with a losing record of 16-17. This past season they followed that up with a disappointing 14-18. Kevin Ollie was then fired for “just cause” at the end of the season and the team looked like it was in a tailspin.

They desperately needed a marquee head coach to recruit in the American Athletic Conference, something that Kevin Ollie struggled with. In swooped Dan Hurley from Rhode Island.

Dan Hurley was the perfect hire for this team. He was able to help turn around two lower profile schools in Wagner, and then Rhode Island. Rhode Island made the tournament in back to back seasons and spent a lot of time ranked throughout this time. If he could recruit at Rhode Island and make them a tournament regular, imagine what he will do at UConn, a school that has 4 National Championships, and has sent too many players to the NBA to count. Of course he faces insane expectations but he should be able to meet them. He has many connections in the New England region so he will still be able to pull in players to fit his system.

His demeanor is more similar to Jim Calhoun than Kevin Ollie was. He is tough and goes at players, but they respond well to his intensity and love playing for him. Jim Calhoun is a legend in Storrs for turning this team into a national powerhouse. He consistently got top recruits and always seemed to make deep tournament runs. Calhoun will serve an advisory role with the team and that is great news for the Huskies. He will groom Dan Hurley and elevate Hurley as a recruitor and developer of players.

Hurley’s first season may be difficult based on recruits decommiting and players leaving the school, but he will have Jalen Adams and Alterique Gilbert. If Gilbert can stay healthy, he is talented enough to turn this UConn team into a possible tournament team. Although I do not expect the team to make the postseason in 2018-2019, they should have an improved record from last season.

The Huskies have every reason to be hyped.