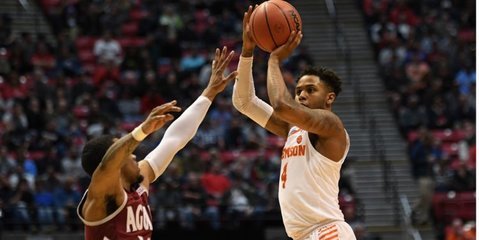 Many felt that without Donte Grantham, Clemson would be unable to take down a New Mexico State team who took down Miami earlier this year. However, Clemson walked into the building and never looked back as they ended the Aggie’s upset bid with a 79-68 win.

All in all it was a well played game for both teams as they played back and fourth in the first half until the Tigers were able to open up a 12 point lead at half. The Tigers defense stifled the Aggies as they only shot 38% from the field and 36% from three. Zach Lofton was the star for the Aggies and led all scorers with 29 but alone could not lead his team to a victory. Clemson was just the better team as Gabe DeVoe and Shelton Mitchell led the way for the Tigers scoring 22 and 23, while helping the team shoot 56% from the field.

The Tigers will move on to play Auburn in the round of 32 on Sunday and will look to continue this stellar performance.