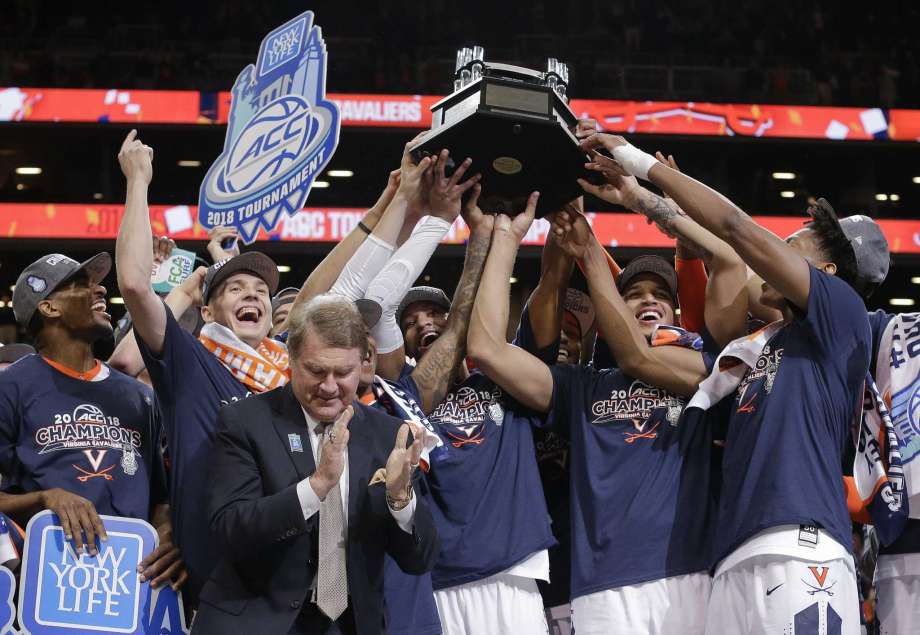 Virginia took home the ACC crown last night by taking down sixth seeded North Carolina, 71-63. Virginia only trailed for 54 seconds the entire game and kept a death grip on their lead using their signature pack-line defense.

North Carolina cut the Cavalier lead to as little as two with just under 12 remaining in the second half, but the ‘Hoos kept scoring and getting clutch stops to hold onto their lead. Virginia made eight out of their final ten free throws to ensure the win.

Virginia was led by sophomore guard and tournament MVP Kyle Guy with 16 points. Guy was followed by Devon Hall, Ty Jerome, and Deandre Hunter, each of whom scored in double figures Saturday night. UNC was led by senior Joel Berry and junior Luke Maye who combined for 37 points, 11 more than the rest of the Tar Heel roster combined.

Kyle Guy, Devon Hall, Joel Berry, and Luke Maye were all represented on the all tournament team which was rounded out by Duke’s Marvin Bagley. Ty Jerome was on the second team.

With the win, Virginia capped off a 31-2 season and locked up the tournaments first overall seed. Tony Bennett has his best opportunity to finally make the Final Four and become one of the games most elite coaches of the time.

UNC will not slide too far due to the loss, and their seeding will most likely be on the two line. The Tar Heels still remain one of the tournaments most dangerous teams despite what seed they are.

The win brought the ACC trophy to Charlottesville for the second time in five years. Under Tony Bennett, Virginia has won more ACC Tournaments than all previous UVA coaches combined. Soon, Virginia and UNC will turn their attention to the selection committee to see where and who they will play in less than a week, but for now, Virginia will celebrate the well deserved championship.