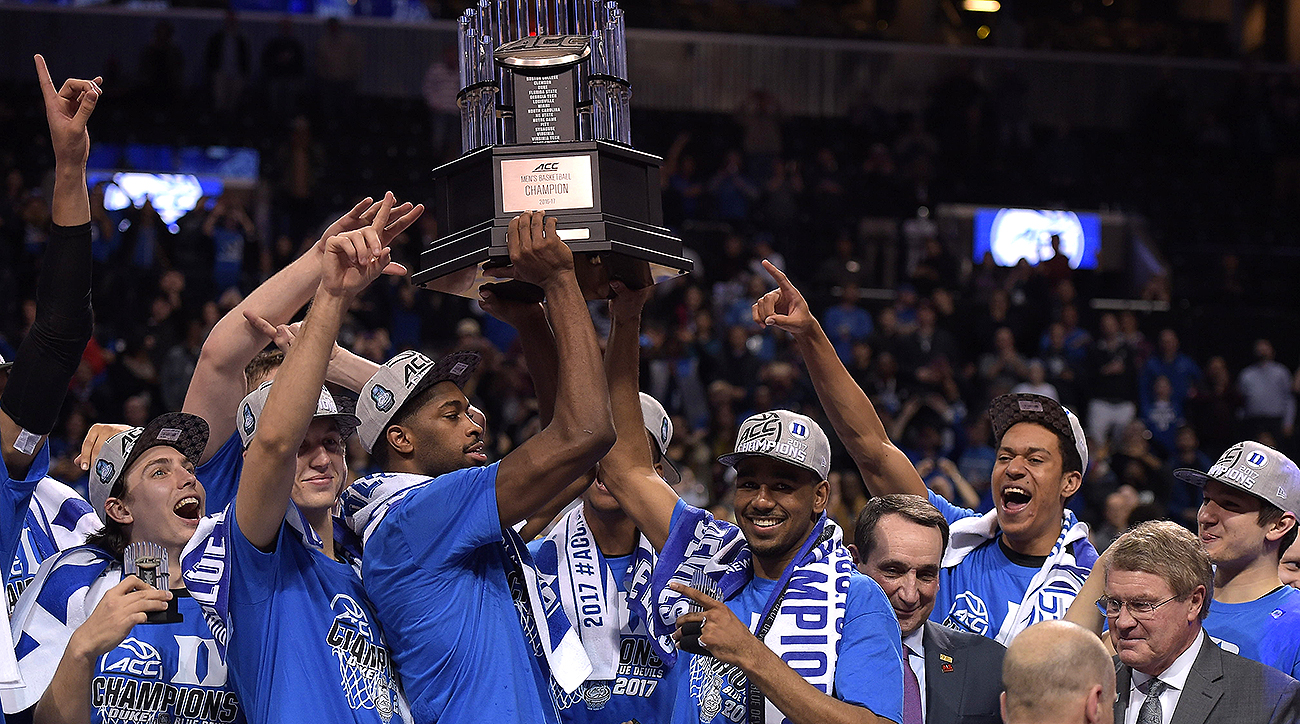 The madness is officially upon us. As a college basketball fan, this is the most wonderful time of the year. We still aren’t quite into the big dance. Don’t worry, it will be here before you know it. Early March is still filled with conference tournaments consisting of teams pushing to make final impressions on the committee or trying to punch their ticket to the NCAA Tournament via an automatic bid. One of the most exciting tournaments, the ACC, starts today, and if this tournament is anything like the regular season was, there will be no words to describe it other than “madness.”

Just the fact that the projected six seed in the ACC won the league by four games proves this season was crazy. Not to mention that the same team lost their lone ACC game to an in state rival at home just weeks after beating them by over 20 on the road. North Carolina saw their seeding slip from the two to the six in the second half versus Duke. Clemson and NC State were picked to finish in the bottom half and yet still stand tall at the four and five seeds.

Who knows, maybe in a season of madness, stability will appear in the tournament. There very well could be a Virginia vs. Duke final on Saturday in Brooklyn. But there will be upsets. There will be tight games. There are so many question marks going into the ACC Tournament, hopefully some can be answered right now.

Who We Can Count Out

Pittsburgh- Pitt has not won an ACC game all season and all motivation is lost. Kevin Stallings is doing a very poor job with a lackluster team, and Pitt has not won a game since December 22. Pending a miracle, today will be Pitt’s last day of the season.

Wake Forest- Wake has four ACC wins but has yet to beat a team in the top half of the league. Their best non conference win is against Illinois early in the season during the Big 10 ACC challenge. They may play Syracuse tough today, but Wake has shown no proof that they can compete with the top teams in the ACC and will not be a factor in the tournament.

Georgia Tech- The most dangerous harmless team, if that makes sense. They have beaten NC State and Miami and have shown they can compete with the best of the best, keeping Virginia within single digits for most of the game. Ben Lammers is capable of dominating the post and Josh Okogie is having a phenomenal season. The problem with the Yellow Jackets is their inconsistency. They only shoot 32% from three and struggle to beat teams they should. Taking that and the fact they have to face one of the strongest backcourts in the league into consideration, Georgia Tech is not a contender for the ACC title.

Who Will Not Make it Past Wednesday

Syracuse- Syracuse is filled with potential talent, but are faced with the task of UNC in the second round. No knock on Syracuse, but UNC is the better team and is trying to prove more than the Orange. Unless Syracuse’s young backcourt gets hot on Wednesday, it will be an early exit for Jim Boeheim’s squad.

Who are the Deep Sleepers

Boston College- Wins vs. Duke and Miami, a one point loss at Virginia, and three of the most talented guards in the league led by ACC First Teamer Jerome Robinson give us some confidence BC will be surprising this week. Ky Bowman and Jordan Chatman round out Boston College’s elite backcourt, each of the three averaging more than 13 ppg. BC can give NC State some real trouble in the second round.

Notre Dame- Preseason ACC player of the year Bonzie Colson is back in action after being sidelined for the ACC season due to a leg injury. In Colson’s absence, the Irish have seen TJ Gibbs and Matt Farrell step up and become dangerous scorers. Rex Pflueger got votes for Defensive Player of the Year. Notre Dame was supposed to be a top ten team with their best player on the floor. Now that he is, Notre Dame has a good shot to make a run.

Who Will Lose to Teams They Should Lose To

Louisville/Florida State- After battling in an expected tight game on Wednesday, the winner will have to face a well rested, hungry Virginia team. Despite playing UVA tough in the regular season, neither will be able to recover from a scrappy game the day before and recover for a noon tip the next day.

Virginia Tech- If the Hookies can fend of ND, they are tasked with facing a Duke squad seeking vengeance for their earlier loss to VT. Virginia Tech does not have the physicality to compete against Duke during a high stakes game in the ACC’s premier showcase. Chris Clarke does not match up well with Marvin Bagley or Wendell Carter. Virginia Tech will see one win at most in Brooklyn.

Who Will be Upset

Miami- The Hurricanes are very inconsistent shooters and are not great on the defensive end of the ball. They barely squeezed into the three seed, earning that coveted double buy. But their first game will be against UNC. In the lone meeting, Miami beat UNC on the road during the Tar Heels Senior Night on a desperation heave at the buzzer. UNC will come to Brooklyn with revenge on their minds and use their more talented team to upset Miami in the quarter finals.

Clemson- Clemson will have to face either BC or NC State in their first game, and either team can give the tigers some trouble. Clemson has lost four of their last six games, including a game at Syracuse. Although Clemson has defied all odds and is one of the top teams in the ACC, they may not have the talent to battle NC State or BC’s firepower in round 3. Especially with Donte Grantham out for the season, Clemson will feel the pressure in the quarter finals.

Who are the Real Contenders

NC State- NC State just missed the double-bye, but is legit. The Wolfpack have wins over Duke, UNC, and Clemson, as well as wins over Penn State and Arizona in non-conference play. NC State have four players averaging over 10 ppg and have the ability to score mass amounts per game. They are 7-6 against RPI top 50 and 8-4 in their last 12 games. The Wolfpack are sneaky, but they are serious contenders to hold up the trophy at the end of the week.

North Carolina- UNC has upperclassmen leadership and ability to create offense from anyone on the court. Luke Maye can score from anywhere in the half court. Joel Berry is exceptional off the dribble. Cam Johnson and Theo Pinson add scoring when Roy Williams needs it. The Tar Heels are looking to win their first two games and go head to head with Duke, a game that is expected to be all the last two matchups were and more. Carolina still has to prove to the committee that they are worthy of a one or two seed, and what better way to show them than competing and winning games in college basketball’s most cutthroat conference tournament.

Duke- The preseason pick to win the league has struggled at times this season, but Duke still finished as the second best team in the league. Their roster is filled with first round draft picks. In fact, their whole starting lineup might be drafted first round. Duke’s talent has been there this whole season, but their chemistry is starting to click at just the right time. The defense has moved to zone, Grayson Allen has moved to point guard, and Duke is playing their best basketball of the season, better than anyone else’s in the ACC.

Virginia- Virginia is the league’s most consistent team by far. The Cavaliers have beaten every single ACC team at least once. Their defense is best in the country and their defensive efficiency is the best Virginia has ever had. Not to mention they have talent unlike past teams have had. Kyle Guy, Ty Jerome, and Devon Hall provide shooting from the backcourt, and freshman Deandre Hunter comes off the bench and is a zone killer by himself. Isaiah Wilkins is the best defender in the ACC. Virginia’s defense and sneaky talent leads us to believe they will be one of the top contenders to win the league.

There it is. Everything you need to know about the ACC tournament. Will it come true? Who knows. The one thing we know is that it will be wild. So use this preview at your own risk. At this point, the only thing to expect from college hoops is the unexpected. So we will leave you with a prediction of every game in the tournament. Will they be right? Maybe. It doesn’t matter. All that matters is the craziness the ACC will endure this week during the premier event for the conference.