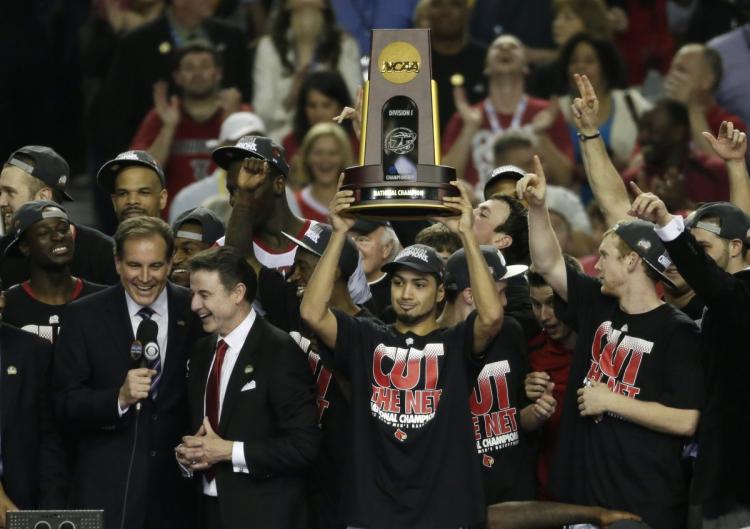 The NCAA missed on another bunny earlier today, as it decided to vacate all Louisville men’s basketball wins from 2011-2014, thus stripping them of two straight Final Four appearances, including their 2013 National Title.  So, once again, in order to be politically correct, we must change the record books and act like these games didn’t happen.  So, without further ado, let’s do exactly that:

In a game in which the Cardinals went back and forth with 20th ranked Vandy, defense was key.  Both teams hovered around the 50 point line, and in overtime, the scoring got going.  Finally, Peyton Siva hit a game winning layup to win it for the Cards.

This game was even more defensive than the Vandy one, as Pitino’s squad let up only 14 points in the 1st half.  Although the Bearcats outscored Louisville in the 2nd, the Cards held on for yet another Big East title.

Gorgui Dieng.  He pretty much summed up this game in which Louisville took down the 1 seed Spartans, 57-44.  The big man now playing in the NBA only had 5 points, but stole the show with his toughness and defense, grabbing 9 rebounds, with 7 blocks, and 3 steals.

Defense seems to be the trend here.  Louisville and Missouri faced off in an impressive duel between two Top 15 opponents.  The problem is, Louisville was the only one who played impressive.  The Cards had 5 players in double-digits, as Luke Hancock led the way with 19 points.  As for the D?  Pitino’s team forced 23 turnovers, and won by 23.

The Cardinals trailed 13 at half.  I was a giddy Cuse fan at the game.  The only problem?  Along with Cuse, I forgot there was another half to play.  Luckily for Louisville, they remembered.  Louisville went on a 27-3 run in a 7 minute span with 16 minutes to go in the 2nd half, and didn’t look back.  Oh, and it gave the Cards back-to-back Big East titles.

Cards fans still won’t forget this one.  Trey Burke tried to steal the show for UM, for UofL didn’t want to hear it.  Luke Hancock had 22 off the bench, thanks to 5/5 three point shooting, along with 18 from Siva and 15 from Behanan.  NATIONAL CHAMPS!

The switch to the AAC didn’t both Rick much.  After wins over ranked teams Cincy and UConn in past weeks, the Cards had a title date with the Huskies for the inaugural AAC Championship.  UConn made a run late, but Montrezl Harrell scored 22 to seal the win.

Conference switching again!  Louisville didn’t like two A’s, so they choose two C’s.  In this game it was MM, as Mangok Mathiang hit a clutch jumper to lift Louisville over the #2 team in the nation.