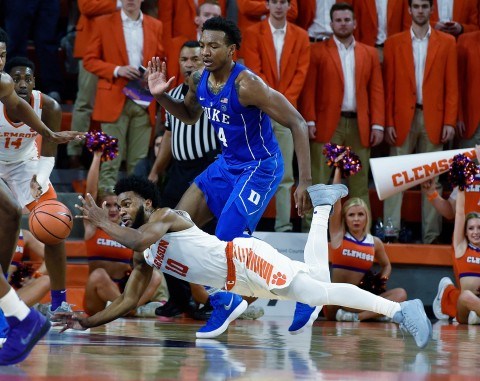 The main story in this game was Duke forcing turnovers and getting fast break opportunities. For the first time in eight games, Duke won the turnover battle, forcing Clemson to give the ball up 13 times to Dukes 11.

Duke led the game by one point going into the break, holding a 35-34 advantage. They did not trail since the 3:47 mark when Carter hit two free throws, and they would hold that lead until David Skara hit a contested layup to tie the game at 57 with two minutes remaining in the second half.

That Skara layup put the cap on a 10-0 Clemson run, but Coach K’s star studded team was not ready to let the lead continue to deteriorate. On the following possession, Gary Trent shot a three pointer from the corner that missed, but he was fouled. Trent, an 87% shooter from the charity stripe, hit all three free throws.

The clutch play of the Blue Devils continued, as they forced Reed to take a wild floater that missed. Right after, Wendell Carter Jr. made a strong spin move to the hoop to hit a tough layup plus a foul. Carter missed the free throw, but it was too late for Clemson. They missed three desperation shots amidst Duke’s free throws to put the game out of reach.

For Duke, their losing streak is just a thing of the past, as they have won their last three including this signature win in the building of a very good Clemson team. They now take sole possession of second place in the ACC with just four games remaining, three of which are at home. Clemson now falls in a tie for third with UNC, but still has four games left in the ACC and has a significantly easier remaining schedule than North Carolina.

Duke looks to keep the ball rolling as they take their hot streak back home where they face a struggling Louisville squad on Wednesday. Clemson will try to end a losing streak before it happens on Wednesday, where they will travel to Cassel Collosium to play their toughest remaining game at Virginia Tech.