Bruins take down the Wildcats, putting them one game back of the Pac 12 lead 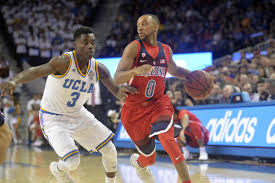 One Thursday Night, the Arizona Wildcats and the UCLA Bruins played in a crucial game for both teams. For the Wildcats, they attempted to gain a strong lead on the Pac 12 with a win against the Bruins, while UCLA needed this game to not only gain ground on the Pac 12 race, but to improve their resume for March Madness. It was a tight battle throughout, but in the end, it was the Bruins coming up with the win 82-74.

The Bruins came out firing, taking a quick 10-3 lead, before the Wildcats went on a run of their own, taking a 20-16 lead just a few minutes later. From then on, The game was close, with both teams trading buckets in the first half. Neither team could pull away, however the Bruins went on a 6-1 run in the last minute of the half to take a 44-34 lead at halftime.

For most of the second half, despite their efforts, Arizona was unable to get within 5 points of UCLA. The Wildcats failed to play strong defense, leading to many occasions of UCLA coming right back with a basket after the Wildcats scored. The closest the Wildcats would get in the last ten minutes of the game was 8 points, and that’s only because Dustan Ristic had a pointless dunk in the final seconds of the game.

Aaron Holiday led the way for the Bruins, scoring 18 points and adding 8 assist on the night, and Thomas Welsh posted a double-double, scoring 11 points to go along with 12 rebounds. For the Wildcats, Ayton struggled from the field going 7-19, but still managed to score 16 points and grab 12 rebounds. Allonzo Trier finished with 17 points.

The Arizona Wildcats (19-6 overall, 9-3 Conference), will look to bounce back on Saturday against a hot USC team, and the UCLA Bruins (17-7 Overall, 8-4 Conference), take on Arizona State in hopes of continuing to improve their resume.