College Basketball is Creeping up on us 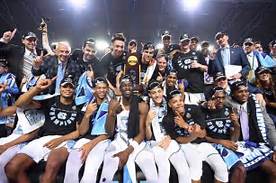 Oh how times flies.  It seems like just last week we were watching North Carolina become crowned as tournament champions.  Now it is already August, and everyone, even UNC, is ready for the new season.  It’s a fresh start for the hundreds of teams that weren’t as fortunate as the Tar Heels.  And it’s redemption time for Roy William’s squad, who have their eyes on the prize – a 3rd straight showing in the Championship Game.  Practices have begun, game plans have been drawn up, and new hope has been cast upon all teams throughout the country.  However, one thing remains the same.  Who will come out on top in the tournament of all tournaments.  March may be 7 months away.  But November is on its way, and that only means one thing: College Basketball.