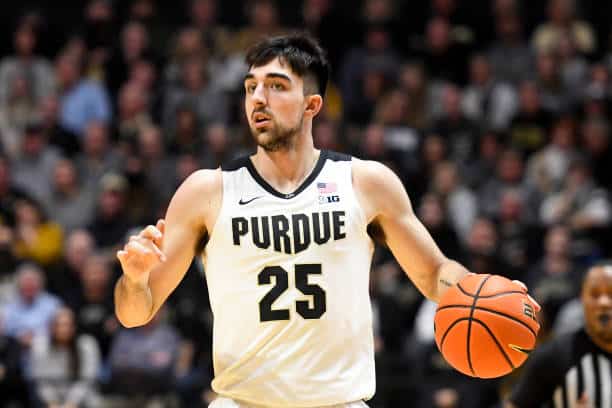 Purdue got out to a 9-0 lead, and never trailed, powered by 24 points and 12 rebounds from Zach Edey.

Purdue took down West Virginia 80-68 in the first round of the PK85 tournament. They never trailed in the game, and the lead only got below 5 points once in the second half. Purdue was able to hold a 5-10 point lead for the most of the game, fighting off any West Virginia runs.

A lot of players contributed, with everyone but Waddell scoring (who had 2 really nice drives that led to assists). Timely shots after timely shots were hit by all, something Boilermaker fans must be happy to see. This is a team that feels engaged on both ends of the ball, and are playing solid basketball early into the season.

Yes, Purdue was never able to completely put West Virginia away until late in the game. However, whenever Purdue’s lead felt like it was in the danger zone, someone stepped up and made a play. Multiple guys were diving on the floor, really fighting for the 50-50 balls.

On one play, Gillis poked the ball free from West Virginia, Smith dove on the floor and batted the ball all the way on to the other end of the court, and Loyer almost tracked it down while diving on the floor. That play will not show up on the box score at all, but it forced West Virginia to have to go the full length of the court with one second, resulting in a shot clock violation.

Braden Smith, Mason Gillis, and Brandon Newman all hit timely threes at separate points in the game. All coming when West Virginia had some momentum, looking like they might really close the gap in scoring.

Takeaway #2: Free Throws and Fouls, Purdue will get many

Purdue went 24-of-28 from the line, West Virginia went 11/17 from the line. That is a 13 point differential from free throws, and Purdue won by 12. Some may say that the refs were good, bad, or anywhere in between. No matter what though, Zach Edey is going to put refs in a spot where they have to call fouls due to his size and dominance.

West Virginia’s starting center, Jimmy Bell, only played 13 minutes due to picking up 5 fouls. The backup big, Mohamed Wague, ended the night with 4 fouls in 12 minutes. Edey is so difficult down low that eventually teams are going to foul him.

I also felt like Purdue handled the half court pressure from West Virginia, specifically Ethan Morton and Braden Smith. Both turned pressure into paint touches, which generated good shots and fouls.

Now when Purdue went to the line, they were close to automatic. Edey ended the night 10/12 from the line, Braden Smith was 6/6, Mason Gillis was 4/5, Ethan Morton and Fletcher Loyer were both 2/2, and Caleb Furst was 0/1. If Purdue is going to get fouled as much as it seems, they are going to have to knock down the ones from the charity stripe.

Takeaway #3: Ethan Morton and Mason Gillis both had their best games of the young season

Ethan Morton ended the night with 4 points, 9 assists, and 0 turnovers. He was generating so many paint touches, and they were ending with good shots. He probably created even more points than what his assists indicate due to players getting fouled. He was making all of the right reads, and it is something that Purdue has looked to get from him since they recruited him. I also felt that he was solid on the defensive end, with a tough matchup against Erik Stevenson.

Mason Gillis had 14 points, 5 rebounds, and 2 steals. He went 2/2 from 2s, and 2/3 from 3s. Both of the threes were solid catch and shoot 3s from the corner (both created by passes from Morton). Gillis also showcased the ability to put the ball on the ground and attack a closeout, drawing a foul once and hitting a 15 footer another time (that I can remember). This was by far his most productive offensive game, but he was also doing some of the dirty work on defense. He generated a few loose balls that turned out to be timely.