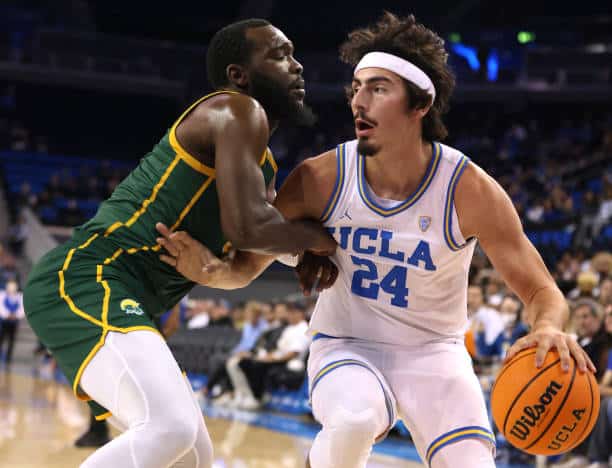 Joe Jackson gives his Pac-12 basketball power rankings one week into the season.

Matchup of the week: Illinois vs UCLA

Sneaky good matchup of the week: Oregon vs Houston

UCLA looked dominant against both opponents to start their season. Jaime Jaquez has been efficient from the field, and Jaylen Clark is currently shooting 53.8 percent from 3 and 76.5 percent from 2.

Arizona is playing very fast, the second fastest in the country per Kenpom. They went 11-of-18 from deep in the first game, and they had 30 assists. Their ball movement is some of the best in the country.

After handily beating Florida A&M in their opening game, Oregon got upset by UC Irvine. They shot 4-of-21 from three and had 15 turnovers. Oregon has been hit by the injury bug a bit, but it is still concerning to have a loss like that this early.

Similarly to Oregon, USC also had an upset where they shot poorly from 3 and turned the ball over a lot. Drew Peterson struggled in the game, and he is going to be a huge part of this team as one of the best players in the country. USC got back on track with their win over Alabama State

Colorado had one of the more confusing weeks, as they played fine against UC Riverside, lost to Grambling State, and then beat one of the best teams in the country in Tennessee. KJ Simpson showed this week that he is the go-to guy for Colorado and will be relied on heavily.

Stanford did not look impressive in either game, beating a Pacific team by ten and losing to a solid Wisconsin team by 10. They’re shooting 23.7 percent from 3, and they will have to be able to get that up.

Washington did what they are supposed to against their two opponent last week, beating both. They have shot the ball really well, and they are generating a good amount of live ball turnovers.

Washington State took care of Texas State at home, but lost a tough one at Boise State. This will be a team to keep an eye on as they grow more together. They could surprise people later in the season.

Arizona State has struggled to score the ball, as they are shooting only 31.3% from 3 and 44.2% from 2. Their defense helped them win their two games, but the lack of offense was not able to be overcome as they lost to Texas Southern in OT.

There were not a ton of expectations coming into the season for Utah. They did not play great competition, but they handled their business, which is something good teams are supposed to do.

Oregon State did not shoot all that well, but their defense did enough to secure two victories for Oregon State. One thing to keep an eye on is how much they turn the ball over as they struggled with it last week.

California could not have imagined a worse start to the season as they lost both games, although they were against two teams that are solid. They are turning the ball over more than most teams in the country, and they are not shooting well. That is not a recipe for success.