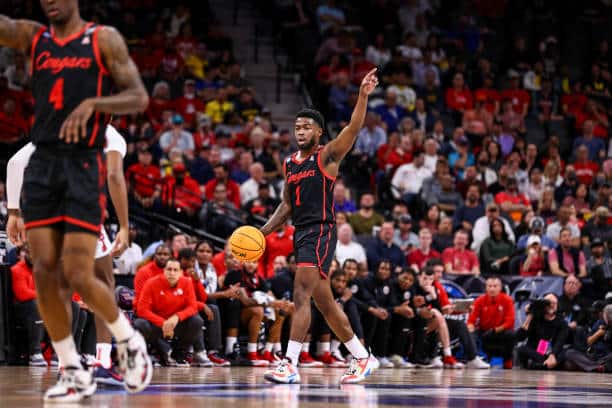 CBB Review ranks the top 100 teams heading into the 2022-23 season. Coming in ranked number 1 are the Houston Cougars.

Last year, the Houston Cougars were plagued by some severe injuries. Coach Kelvin Sampson had to pivot from his style of play and offense to adjust to a game without Tramon Mark and Marcus Sasser. This team was able to go deep into the NCAA tournament before falling to Villanova in the Elite 8.

A huge blessing for the Houston Cougars fans was the return of Marcus Sasser and Tramon Mark. The accolades are already stacking up for Sasser. Sampson also grabbed some key players from the transfer portal and grabbed a top freshman in Jarace Walker. This team will be scary as their defense creates offense, and the ability to create second-chance opportunities is difficult to compete against. The ability to do a complete lineup switch (pending injury) makes the depth and strength of this team very difficult to overcome.

Houston will look a little different as players go onto their professional careers and only lose two players to the portal. These two were replaced by two talented guys that fit Coach Sampson’s style of play. Last year, the Houston Cougars gained experience, and Jamal Shead jumped into a more prominent role and became a better player.

Marcus Sasser had a hot start to his 2021-22 season before suffering a foot injury. He was the leading scorer for the team. Sasser was the offense for this team, and the excellent coaching job by Kelvin Sampson created a new scheme, and Jamal Shead stepped up.

This team is similar to last year but has added some younger talent. Coach Sampson knows how to deploy an offense that fits the talent. Sasser will likely show out in any as long as he remains healthy. I wouldn’t be surprised if he is not only first-team AAC but AAC Player of the Year. Coming back as a leader and after another year of watching his team, he has a better idea of what to expect. I genuinely believe if last year this team had Sasser and Mark healthy, they would have taken home the championship.

'22-23 Watchlist: Houston's Marcus Sasser is unequivocally one of the top guards and overall two-way players in the Nation. Dynamic 6-foot-2 shot-creator with tremendous range and versatility as a scorer. Shifty handle, high-level touch on floaters, and embraces physicality. pic.twitter.com/np80hDDRzO

This is a freshman that will be thrown into a system. A highly rated prospect, Jarace Walker is the number 10 player nationally according to ESPN and number 11 according to 247Sports Composite. On top of that, Walker will play under one of the best coaches in the nation.
With his talent and ability, there will be a lot expected of him. He will be thrown into a Fabian White/Mark role. With Walker taking on this role, he will need to transition from high school to college. Watching his tape, I am not surprised that Sampson wanted him. While he is an offensive asset, his defense and rebounding ability make him valuable. The Houston Cougars are known for their suffocating defense, which is why he is a make-or-break player. If he doesn’t transition well or gets caught on his heels or beaten on a drive, he could be a weak link.
I trust in Coach Sampson and the ability and experience of this Houston Cougars team and staff to bring him into Division-I with a splash. Walker could quickly end up as an NBA first-round draft pick in 2023. These players taught him all the skills, his body style, play, ability to shoot the 3-pointer, and play-making ability to make him a solid prospect. He can break away, create space, rebound on both ends, pass, handle the ball and find weaknesses in the defense. On top of that, Walker cuts off lanes, has excellent timing for blocks, and may be in your pocket when he comes to help.

Think about how crazy this stat is. Without two of their top playmakers, the Houston Cougars still managed to play exceptional team basketball and finish in the top 15 in the country in assists per game.

Especially with Sasser, but with Mark back and health too, this Cougars team has the potential to have some of the most fluid and all-around great basketball to watch this season. It all starts with moving the rock and finding open players, and of course, Houston has the talent to make each other look better.

With a slow start, the Houston Cougars have a fine non-conference schedule. The notable games include A10’s Saint Joseph’s, Summit League’s Oral Roberts, Pac-12’s Oregon, and WCC’s Saint Mary’s to ease into no-conference. Wrapping up against some much stricter matchup, they will play Alabama and Virginia. The biggest surprise is that the Cougars do not have an early season tournament that allows the team to show their talent. These will still be difficult tests and will help build the Cougars’ resume for March Madness.
The Houston Cougars should cruise through most of the American Athletic Conference, getting some tough matchups against the Memphis Tigers, Cincinnati Bearcats, and Tulane Green Wave. The tough tests will be when the Cougars travel to these team’s home courts. Sampson and Houston should cruise right into the NCAA Tournament, pending injuries and ability to gel. With all the talent, this team will be scary to face in March, and are our combined pick to win it all.