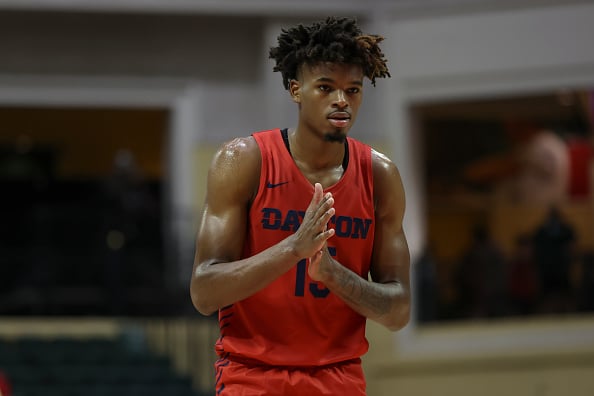 CBB Review presents its 2022-23 Preseason Mid-Major All-Americans, featuring some of the best players in the country you’ve never heard of.

The time is almost here. Arenas are getting prepared for another season of college basketball. It doesn’t seem that long ago that Kansas was hoisting a championship trophy, but none of that matters now. All that matters is that everyone is 0-0 heading into the new year. There is some excitement surrounding a few mid-major programs coming into the season, and a lot of that has to do with the personnel they bring to the table.

With that being said, CBB Review has you covered in presenting the names of guys you may (or may not) have heard of heading into the new season.

The first name on our list needs no introduction. Abmas didn’t let his play diminish last season even though Oral Roberts was not making Cinderella level headlines. He was still a scoring machine, averaging 22.5 points per game. However, his game rounded out well, also leading the team in assists and steals. Abmas is back for one more round, and his Golden Eagles come in as Summit League favorites. Look for him to try and take ORU on one more magical run.

Holmes didn’t waste any time announcing himself to the Atlantic 10 last season. He rocked his freshman year en route to the A-10’s Rookie of the Year award, and was also good enough to finish on the league’s second team. Holmes also set the school’s single-season blocks record, entrenching himself as both an offensive and defensive presence. The league took notice, nominating him as their preseason player of the year. Expect him to take another step forward and help Dayton make a run in March.

Ike was a big reason why Wyoming was able to sneak into the NCAA Tournament last season. He had a breakout sophomore campaign, finishing in the top 30 in the country in both scoring and rebounding. He was also just one of three players in the entire country to average as many points and rebounds per game as he did last season. Ike should very easily average a double-double in 2022-23, and that could very well help the Cowboys take the next step and capture a Mountain West title.

Walker didn’t waste any time acclimating himself at UAB or in Conference USA last season. He racked up every award he could, including league player of the year, newcomer of the year, and the conference tournament most valuable player. He led C-USA in points per game, and a lot of that had to do with his sharpshooting ability from beyond the arc. Walker will look to cap off his final college season by getting the Blazers back into the Big Dance and potentially making a Cinderella run.

Bradley arguably picked up where he left off in his first season at SDSU last year after spending his first three seasons at Cal. He earned the Mountain West’s Newcomer of the Year honors, helping take the reins of the Aztecs offense. Bradley can do just about everything San Diego State needs him to depending on the match-up, and his veteran leadership will go a long way towards helping SDSU capture another league title.

There’s not much Darius McGhee hasn’t done in his time at Liberty. He became Liberty’s first back-to-back league player of the year award winner, and was the NCAA’s second leading scorer last season. Furthermore, he led the nation in made threes in 2021-22 as well. McGhee will make a real run on breaking career records for the Flames this season and is a guy who can singlehandedly help Liberty pull off yet another NCAA Tournament upset if they can get back there once again.

Speaking of guys with nothing to prove, Antoine Davis is another that fits that bill. He is already Detroit Mercy’s all-time leading scorer, and will easily eclipse that mark for the Horizon League this season as well. Davis has made the league’s first-team every season of his career, and finally earned a share of the league’s player of the year award last season. The only thing left to do is to get the Titans to the promised land. Regardless, make sure you catch Davis in action at least one more time in his final college season.

JT Shumate made the most of his first full season on the court for Toledo last season. He led the Mid-American Conference in three-point shooting, while also leading the Rockets in rebounding and shooting percentage. Shumate can dominate both offensively and defensively, and that versatility will be a key reason why the Rockets can be a contender once more in the MAC. He made the MAC’s second-team last season, but a first-team finish and a player of the year award are more than plausible this season.

Isaiah Stevens was the engine that helped make Colorado State go last season. He was a finalist for the Bob Cousy Point Guard of the Year award and enters this season ranked second all-time in school history for assists. Stevens should be able to elevate himself from second-team All-Mountain West to first-team this season. Furthermore, he’s clutch when it matters, having led the conference in free-shooting last season as well. Stevens will be asked to do more for the Rams this season, but he’s up for the challenge.

If you ask Jalen Slawson to do something for Furman, he’ll most likely do it and do it well. Just look at last year’s team rankings as a prime example. Slawson led the Paladins in in rebounds, assists, steals, and blocks per game a season ago, while finishing just shy of being their scoring leader as well. Slawson’s efforts on defense saw him grab the Southern Conference’s Defensive Player of the Year honor. He is a high-energy guy who brings it every game, making him a must-see player before the season is over.

Tyler Burton stepped up big for Richmond two years ago before taking on an even bigger role last season alongside the squad’s numerous seniors. Now, Burton will be THE guy for the Spiders heading into this season. He was Richmond’s leading scorer and rebounder last season, which was enough to earn him a place on the Atlantic 10’s second-team. Burton will certainly be asked to do more as he looks to try and help Richmond get back to March Madness, but it’s nothing he’s not capable of handling.

Tucker DeVries wasted no time announcing himself to the rest of the Missouri Valley Conference last season. A fantastic freshman year led to the MVC honors as the Freshman of the Year as well as a place on the league’s second-team and newcomer team. A major reason for all of the accolades had to do with leading Drake in scoring while leading the Bulldogs into the CBI. DeVries will only continue to improve, with his eyes set on MVC Player of the Year and a return to the NCAA Tournament for Drake.

Hunter Maldonado was another big reason why Wyoming did so well last season and has high hopes heading into this season. Maldonado dominated in the assist game, setting a single-season and career record for the Cowboys last season. Furthermore, he earned a National Player of the Week honor last February and recorded just the third triple-double in school history. He should be well on his way to earning another first-team Mountain West nod and will contend for the league’s player of the year honor.

Dayvion McKnight built upon his stellar freshman campaign last season and proved why he is part of a bright future for Western Kentucky. McKnight led the Hilltoppers in scoring and recorded the program’s fourth triple-double ever. McKnight just about does it all with his rebounding and passing ability as well. He should be able to finish as a first-team Conference USA member again this season, and he will help WKU push for a league title.

Ben Sheppard formed part of a formidable backcourt duo for Belmont a season ago. He led the Bruins in scoring last season and was also a major threat from beyond the arc. Sheppard usually put up high-quality shots and scored in double-figures in 29 contests last season. He will have to translate his game to a new league this season, but he is more than up for the challenge as he tries to help the Bruins get back to the NCAA Tournament.