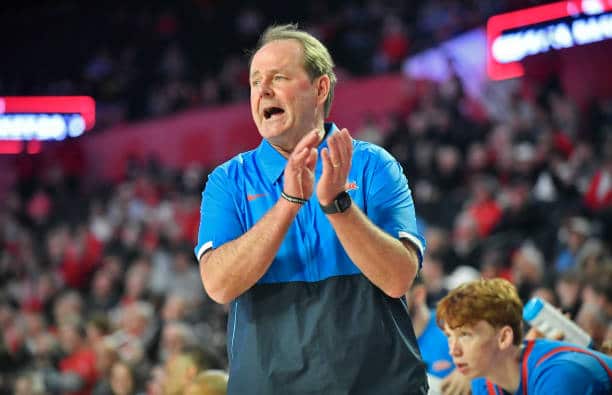 CBB Review’s Ethan Carbone goes in-depth on the top 30 college basketball recruiting classes. Next up are the Ole Miss Rebels who come in at 25.

Ole Miss comes in at the 25th best-recruiting class according to the 247 composite rankings. The players in this highly touted class are Malique Ewin (84th), Amaree Abram (103rd), TJ Caldwell (164th), and Robert Cowherd (213th).

Ewin comes into Ole Miss as their sixth highest-ranked recruit of all time.

At 6’10″, Ewin may not have the biggest body, however what he lacks in size he makes up for in length and strength. With powerful hands and feet, he’s able to grab rebounds and box out opposing big men. On the offensive side, Ewin will be primarily a post scorer, but can step out to the perimeter and drive the ball back in. Defense is his specialty, as being on the lighter side he’s able to defend the paint and athletic wings.

Ewin comes in behind a few transfers, including Buffalo’s Josh Mballa, and will need to beat them out for the starting job in 2022-23, which will be tough. His potential points to Ewin becoming a leader and a force in the SEC.

Abram will come in as a big point guard who will be able to play as the primary ball handler or as a slasher cutting to the basket. A terrific player offensively who can shoot the three well, Abram definitely makes it a point to drive to the bucket. He can score off balance, which gives him multiple tools as a point guard.

Coming in as a freshman, it’s expected for him to play good minutes as a backup and learn the Ole Miss system. As long as he continues to improve, Abram can be the starting point guard of the future in Oxford, Mississippi.

Caldwell comes into Oxford about as hot as any recruit can be coming into college. His high school highlights will make you question how he wasn’t ranked higher than 164th. An outstanding athlete who seems to jump out of stadiums, Caldwell loves getting to the hoop to dunk or use his soft touch to get around defenders at the rim.

Looking at this year he will be a depth piece playing limited minutes. However, once Caldwell develops and fine tunes his mechanics he will be one of the most athletic and fun players to watch in the SEC.

Cowherd comes into the SEC as one of the best freshman perimeter shooters. Kermit Davis has been hot on the recruiting trail and grabbing three big guards was just the start. Once Cowherd committed, everyone’s eyes lit up as he brought in a knockdown jump-shooter. However, he can run the floor and won’t just stick around the perimeter, especially on the fast break.

Known as an underrated guy his entire career, Cowherd is ready to let it rip. As a freshman, playing time will be scarce. As Cowherd grows and develops, he has the potential to be one of the top three-point shooters in the SEC.