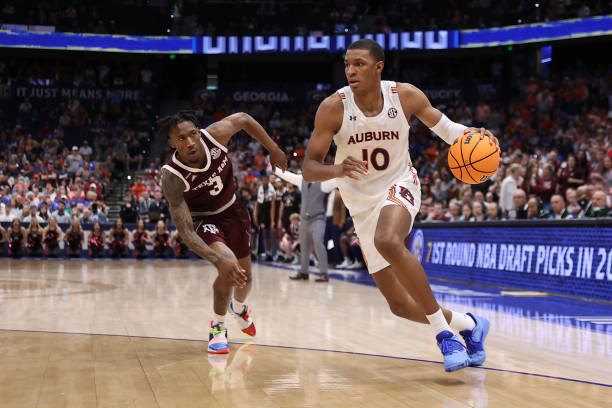 The SEC is quietly producing large amounts of NBA all-stars. These 10 stars could be up next in the 2022 NBA Draft.

Ellis, an older guard at 22 years old, is lankier than J.D. Notae. Ellis and teammate J.D. Davison are being graded similarly by scouts, but given last year’s outputs by both, Ellis seems to have a better pro outlook. At 6’6’’ but just 167 pounds, Ellis is a premier shooter, and led the SEC in FT% last year. His perimeter D is high-quality, and he ranked in the top 5 in the conference in steals per game. (1.9) However, a thinner frame leaves him outmatched against bigger competition, and while his outside defense is good, he needs to improve his technique and avoid foul trouble. If Ellis can put on pounds and continue to improve his shot, he could be 6th-man material in a few years.

Pippen, the son of Bulls great Scottie Pippen, was the heart and soul of the Vanderbilt Commodores last year. Standing at just 6’1”, Pippen isn’t the tallest guard, but consistently found ways to the basket, leading the SEC in free throw attempts. Pippen led the conference in turnovers, but that can be chalked up to his SEC-high 34.4% usage rate. He averaged 4.5 assists per game, and has shown an ability to make difficult passes even while the opposing defense’s focus is entirely on him. He’s a decent perimeter defender, averaging almost 2 SPG over the last two years, and his wingspan (6’6”) somewhat makes up for his smaller height. While he is able to get to the basket on offense, he cannot be relied upon to consistently grab rebounds or play defense inside. A somewhat concerning trend is his 3PT% falling every year in college, down to 32.5% last year. While some of that can be chalked up to being the focal point of the offense, he needs to improve his outside shot given his size. Pippen is a natural scorer. If he isn’t drafted in the 2cnd round, he’ll get scooped up by a team right after the draft, and it won’t just be because of his name.

Molinar, a native of Puerto Rico, placed 3rd in the conference in PPG, trailing only Pippen and Notae. (17.5 PPG) However, Molinar has the potential to be a better NBA talent than both. Molinar stands at 6’3”, and has an impressive 6’8” wingspan. His athleticism and scoring prowess could pay dividends in the league. A good shooter, a 25.2 3PT% last year should prove to be an abnormality rather than the norm. His length should lead to plenty of offensive opportunities given his ball-handling skills, and is high-quality at getting around defenders and to the basket. His passing game needs work, as he forces some passes in bad situations, but still led his team in assists last year. Defensively, he doesn’t impact the game much. While he has the size to match up with NBA guards, his defensive fundamentals need work. Realistically, however, his offensive ceiling makes up for his defensive shortcomings, and I believe Molinar could be a steal in the early 2cnd round. Molinar has the potential to become an all-star in due time.

Williams is the opposite of the offensive star mentioned above. Most of his value comes on the defensive side of the court. Despite a big frame, (6’10”,235) he has a sneaky quickness on the court and can guard almost any position. He is an excellent rebounder, and finished second in the conference behind Oscar Tshiebwe in rebounds per game. (9.8) He led the SEC in charges, and produced over a block per game. An argument could be made that Williams was the most well-rounded defender in the conference last year. Offensively, his perimeter game is non-existent, but he was consistent inside the arc last year, making over 50% of his shots. He also averaged 1.3 SPG as Arkansas’s starting center. Williams is one of the best defenders in the draft, but his offense lowers his ceiling. If he ever develops a reliable jumpshot, he could end up being a solid starting center. For now, his defense is good enough to keep him on any NBA roster.

Eason, a former Cincinnati Bearcat, improved across the board in almost every stat after transferring to LSU. SEC 6MOY, Eason managed to lead the Tigers in points (16.9) while coming off the bench, averaging 24.4 MPG. He has length, standing at 6’8” with a 7’ wingspan, which he uses well on the defensive end. (1.9 SPG, 1.1 BPG last season) However, he needs to improve as a passer, as he only put up 1 assist per game compared to 2.2 turnovers per game. A quality rebounder, he managed 6.6 RPG in just 24 minutes. However, his fundamentals are suspect, and his big jump in shooting metrics could be a fluke given his numbers at Cincinnati, with his real shooting prowess being somewhere in between two years ago and last year. Eason needs some time to develop into a reliable NBA player, but he’ll go in the late first round.

Kessler, standing at 7’1’’, reminds me a lot of Hassan Whiteside. He’s an excellent blocker, (highest block % in NCAA history) and is still somewhat agile even with his length. Rebounding-wise, Kessler could use some work. He gets good numbers, (8.1 PG last year) but plenty of those were due to him simply being the tallest player on the court, rather than his positioning. Offensively, he is good in the paint, and can finish physically. However, he can’t shoot outside the paint, and it makes him one-dimensional. His free throw percentage also shows issues on that front, as he only hit 59.6% last year. He struggles guarding on the perimeter, and almost all of his value comes in the paint. That being said, within the paint, he has the ability to be a top-class defender in the NBA.

Chandler is much younger than the previous names on the list, and only played one season at Tennessee before declaring. Only 19, Chandler still has plenty of room to grow. He’s solid behind the arc, (38.3%) can find open teammates at a high level, (4.7 assists per game) and is extremely gifted athletically. Despite his high 3PT numbers, however, he only shot 60% from the line, comparable to Walker Kessler. He only stands at 6’1”, so he’ll be undersized in the league. However, he has also shown to be a very capable defender, averaging 2.2 SPG last year. Chandler has a lot of potential still untapped, and it wouldn’t surprise me if he became the best PG from this class.

Sharpe didn’t play a minute at Kentucky, and regardless of how good he is, will be a risky pick. Has great size for a guard, (6’6”, 200) is extremely athletic, and has loads of potential. He can shoot the ball well, and has a 7’ wingspan. There’s not much more you want from an NBA guard athletically, he has all the physical tools. That being said, jumping from high school to the NBA with basically a year off of basketball is extremely difficult. Questions about his intangibles have arisen, although there could be no truth within those rumors. Sharpe will be picked in the lottery, and he could be the most scrutinized pick of the first round given the unknowns.

Another Kentucky guard, Washington is a bit shorter at 6’3’’, but still plenty enough height for a NBA guard. Washington is a very complete player, and although a bit older than Sharpe, (will be 21 by the first month of the season) improved his draft stock over the year with solid performances at the college level. He dealt with some ankle injuries over the year, but hasn’t had any other durability concerns. He can shoot the ball well, facilitate a high-level offense, and limit turnovers. Has a strong basketball IQ and rarely fouls. Washington could be the most polished PG in this class, and I wouldn’t be surprised if he was picked in the top 10.

Jabari Smith is the best player in this draft class. At 6’10”, 220, he can use his frame to make shots inside, as well as utilizing a lethal jump shot to hit midranges and threes. Led his team with a 42% mark from behind the arc, and shot 80% from the line. He’s very quick for a player of his size, and can guard any position. Plays physical (7.4 RPG, 1 BPG) but smart, (1.1 SPG, 2.4 FPG) and is a leader on the court as well. Even his weaknesses (ball-handling, passing) aren’t weaknesses, and rather just things he’s good at but could improve upon. I’d be surprised if the Orlando Magic don’t pick him #1 or if he’s not an All-Star by 2025.