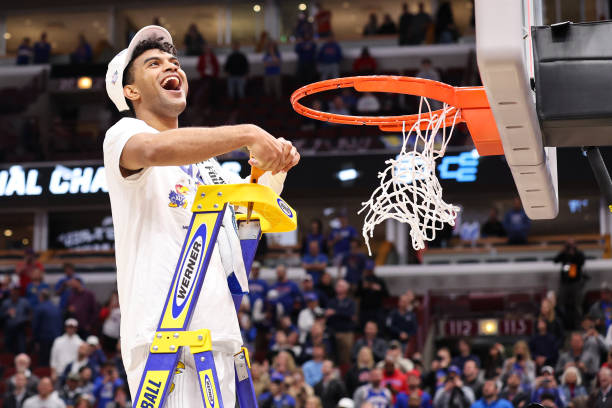 What confirms a team as a “Blue Blood?” Is it championships, Final Fours, or All-Americans? We decide the most stacked Final Fours of all time.

The problem with including Final Fours this far back is no real history had been established. However, there surprisingly was enough, even though not even 20 NCAA Tournaments had happened to this point.

Looking ahead to 2022, North Carolina’s been to 21 semifinals, Kansas has reached 16, Michigan State’s appeared in ten, and San Francisco still has those three to show for. Taking that into consideration, and it had clout in the moment, and looking back on it, the weakest historical program was the top in that time in San Francisco. Weird how things work but you can’t deny this was actually a very good Final Four.

In 1999, UConn was new to the game, making their first Final Four. Surprisingly, they’ve only been to five, but an 80% national title rate is good enough to make the Huskies a top ten program of all time.

For Duke and Michigan State, there’s little else to explain. Duke may be the only true “Blue Blood” but this Final Four was stacked.

Similar to 1957, and a few other Final Fours on this list, UNLV is an outlier. But, in 1991, they weren’t. This was their second Final Four in a row and third in a five-year span, having won it all the year prior.

Villanova’s certainly a leg or two above UNLV, but you could compare this year’s Final Four to that of 1991 – three surefire “Blue Bloods” and one debatable. Unfortunately, since 1991, the Runnin’ Rebels have only made it to the Sweet 16 one time in 2007, so the lack of success drops it down on this list.

Rick Pitino had brought Louisville back to the standard of the Denny Crum era and 2012 was peak Cardinals basketball. They’d make it back the next year, winning it all (at least according to the history books).

It was also noteworthy that Louisville and Kentucky shared the Final Four, and played in the semifinals. You could argue, that rivalry is right there with Duke and North Carolina, so the intensity of these games was nothing short of outstanding.

Another outlier example, but the Badgers certainly are not a college basketball powerhouse. This was their fourth and most recent Final Four and Wisconsin’s only championship came in 1941. However, it was one of, if not the best stretch of basketball in Badgers’ history, which made it stand out in this specific year.

Any time three of the Champions Classic teams are in the Final Four, it makes for a good one. And surprisingly, that’s actually a stat you should remember next time you fill out those brackets.

It’s a different statement when it comes to Kansas, North Carolina, and of course, UCLA. The 2008 Final Four was really all you could ask for, especially as UCLA got itself back on the map for a short chunk of years.

A lot of people tend to pit this Final Four against 2022’s current semifinals. However, for me, Syracuse’s lone national title and Louisville’s three make it hard to distinguish them as “Blue Bloods”. Both are top 15 programs of all time, but the “Blue Blood” category is a different argument.

If you want to go ahead and look back, these four teams have combined for 49 Final Fours – a massive number. At that time – it was Syracuse’s first and Louisville was also new to the game. That’s the argument for me.

Why does this one pass 1975’s Final Four? Simple – these four teams were all more established. Of course, Villanova was sort of the new child on the block, but UNC, Michigan State, and UConn had all won multiple championships to this point.

Looking back on it, given Nova’s more recent success, it makes this Final Four look even better. You’ve gotta take account for that, but you can’t place all the weight on it.

When you have Kansas, Kentucky, and North Carolina, it’s automatically set up to be a great Final Four. The history was there, even in 1993. With Michigan, you had the Fab Five, so it felt like a “Blue Blood” team of sorts.

Of course, Michigan only has the 1989 title to show for, with the Fab Five never winning a national championship, However, the historical impact is far greater and at that time, Michigan was the coolest commodity in college basketball. This Final Four was only second to one.

It’s the “Blue-Bloodiest” Final Four of all time. Contrary to most of the other Final Fours included, these are all established teams with at least 3+ national championships each. There isn’t one weak spot, and even if you consider the Wildcats a “New Blood” – I disagree – they’ve been the most consistent top-level team over the past decade.

The matchup of Duke-North Carolina automatically makes these semifinals a must-watch. However, matchups aside, it’s four basketball programs that are arguably all top eight all-time. That’s never happened until now, and we should appreciate it for what it is.