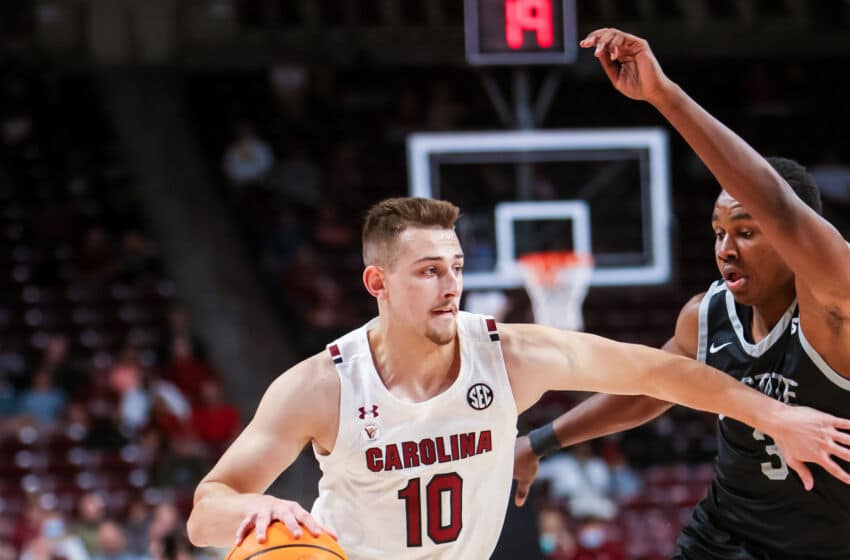 South Carolina basketball took out Wofford in a Colonial Life Arena Tuesday night, using a huge night from Erik Stevenson to propel them to an eleven point win, 85-74. Wofford started out red-hot from three, opening up an eight point lead in the first half, 24-16. Their offense was getting to their spots and connecting on almost every shot the Terriers took in the first minutes of the game.

However, that momentum was short-lived as South Carolina took a four point lead into half and didn’t look back. Despite getting into foul trouble and giving up 23 free throw attempts, the Gamecocks managed to pull ahead by as many as 14 as the threes fell for Frank Martin’s squad, shooting 54 percent for the night.

Takeaway #1 – Erik Stevenson can be crucial

Erik Stevenson started strong for the Gamecocks, scoring 18 points in the first half alone in a 25 point effort. After going an abysmal 2-of-25 through the first three games of the season, he has turned a corner for South Carolina and emerged as a leader for Frank Martin’s squad. Even when he wasn’t draining threes, we kept the defense on edge and was able to let the offense flow more efficiently for the ‘Cocks.

Takeaway #2 – Wofford’s depth could prove to be a problem

Wofford only had nine players enter the game Tuesday night and only six of those nine scored at least one point. Losing Messiah Jones exposed the lack of frontcourt depth for the Terriers, as B.J Mack was completely overwhelmed against South Carolina basketball, scoring nine points on just 2-of-9 from the field. He also picked up 4 fouls on the night. If there was a bright spot for Wofford, it was guard Max Klesmit, who managed 27 points on just 10 shots from the field, connecting on 5 of his 7 attempts from behind the arc.

Upperclassmen accounted for 68 of the Gamecocks’ 85 points, with James Reese, Jermaine Cousinard, and Stevenson all scoring in double figures. While Jacobi Wright, Devin Carter, and Ta’Quan Woodley all contributed and look to have a great fit in Martin’s system, the senior transfers and upperclassmen are running the team exactly how Frank Martin wants: smart and physical.

Looking ahead, South Carolina basketball gets a tune-up game against Rider next Sunday to close their November slate. The contest still should be an intriguing one to watch as star forward Keyshawn Bryant makes his season debut for the ‘Cocks. For Wofford, this marks their second defeat of the year, with the other coming against Clemson earlier in a tight contest. Wofford will take on Georgia next in another SEC matchup which could be an upset for the Terriers, as Georgia has struggled early this year.

Featured image from Garnet and Cocky