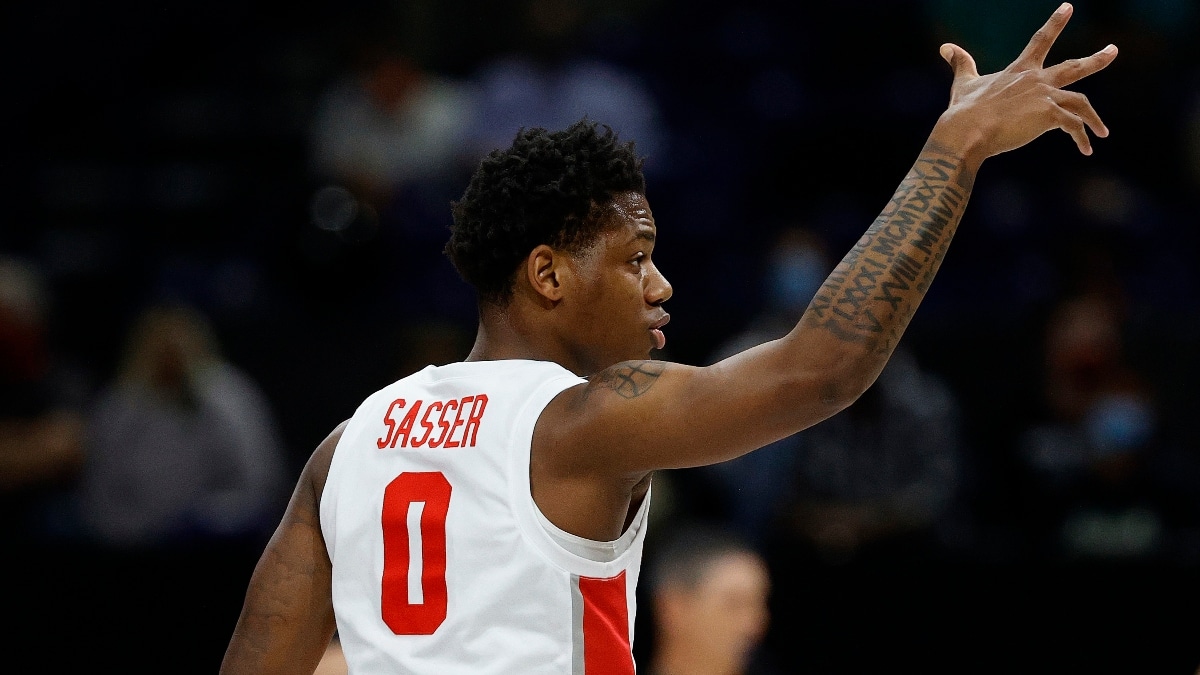 The American Athletic Conference had some excellent resume-building matchups this past week. Some teams had success, while others faltered. There is a lot of room to grow and the loss of Houston, UCF, and Cincinnati will be huge. Let’s take a look at how these teams matched up this week to help the AAC.

After two easy matchups this week, this Cincinnati basketball team is sitting at 4-0. David DeJulius showed out in the first game this week as he put up 21 points against Alabama A & A&M. The most surprising thing to me is that Mike Saunders is coming off the bench for the Bearcats. He was the second-highest scorer in this game as he put up 14 points in 20 minutes. Jeremiah Davenport seems to be the most consistent player for Cincinnati basketball, consistently putting up double-digit games and doing see in limited minutes. The Bearcats have a tough matchup on Monday, November 22, taking on the No. 11 ranked Illinois.

Highlights from tonight's 79-45 victory over Presbyterian––presented by @pepsi:

ECU basketball had a couple of tough losses as the team went toe-to-toe, with OU losing 79-75 and a slightly more significant loss to Davidson 76-67. After losing Jayden Gardner, Tristen Newton has stepped in and is averaging double-digit games. He continued to play out of his mind having almost two games of 30 points, and he came up short last night as he only put up 28 against Davidson. The Pirates will need to find someone to help Newton consistently because this team seems to be in the same position again with one star and no help. There have been bright spot games from Brandon Suggs, Brandon Johnson, and Tremont Robinson-White. The games this week should be easier as they face Coppin State and Old Dominion this week.

Back to work at 3:30 pm CST MONDAY in First Round of Maui Jim Maui Invitational#ForTheCity x #GoCoogs pic.twitter.com/xJzZlLUhkG

Finding themselves at 3-o in no surprise, No. 15 ranked Houston basketball took down its lone opponent this week in Virginia basketball. The Cougars shot lights out as it took down the Cavaliers, going 11-20 from 3-point land. Marcus Sasser led his team and received help from Kyler Edwards as they put up 19 and 18 points, respectively. Coach Kelvin Sampson is looking to become a National Champion, and Houston basketball will likely be one of the toughest matchups in the American Athletic Conference and the NCAA. The Cougars have another tough matchup today as it takes on Butler, and it should be another grinder.

The No. 11 ranked Memphis basketball moved to 4-0 this week. The Tigers took down Saint Louis and Western Kentucky. Coach Penny Hardaway has another tough matchup Wednesday as the team takes on Virginia Tech. The highly ranked and recruited Jalen Duren and Emoni Bates are as good as advertised. Both players have been excellent, and the Tigers have so many weapons that can go off on any given night. Tyler Harris has been a huge spark off the bench for the Tigers. The biggest issue for the Tigers is that they have so many weapons it is difficult for all these stars to shine so brightly.

SMU basketball falls to 3-2 after a tough loss last night against Missouri in the Jacksonville classic. The Mustangs took Missouri to overtime after holding the lead throughout a majority of the second half. Kendric Davis is as advertised and still the leader for this team, running the point and averaging six assists per game and 17.8 points. My big miss was expecting Tristan Clark to come in and have more success, but the big one that has come in is Marcus Weathers from Duquesne. He is averaging 13.8 points per game and leading in rebounding with 8.3 per game. Emmanuel Bandoumel is the other guard having success for the Mustangs. SMU basketball has depth but still needs to play its game. Coach Tim Jankovich is still trying to figure out what will give this team the most success and hope that he can sooner rather than later. The Mustangs tip-off tonight against Loyola Marymount.

Another look at one of the plays that sparked a big 2nd half run in today’s win! 😤

Temple basketball had a brutal string of games ending this week at 2-3, matching up with USC, Clemson, Boise State, and Elon. Khalif Battle continues to be a bright spot, but he needs someone else to take the pressure off of him and show some leadership.  Damien Dunn and Tai Strickland have shown promise and some skill but have struggled to be consistent. The bigs for the Owls have not been assertive also to help take pressure off of these guards. Sage Tolbert has been fine, but I expect more growth on the offensive end for Nick Jourdain. Jourdain has shown some substantial change in rebounding and blocking. If he can figure it out on the offensive end, NIT hopes could very quickly be in reach. The Owls will have a week to recover as its next game is Saturday against Delaware, which will be challenging.

This week, Tulane Basketball fell to their lone opponent in another close game against Florida State to move to 1-2 on the season. Jalen Cook is a problem for opposing teams after transferring from LSU. He has put up 21, 19, and 28 points in the Green Waves’ three matchups. Jaylen Forbes has been helping him out as he has also been a consistent double-digit scorer. Tulane needed Kevin Cross in this matchup but was out due to injury. This team has a lot of potential and will likely steal a few in the AAC. The Green Wave will play today verse, Drexel.

.@TUMBasketball's @samgriffin3rd with the nice move and the Golden Hurricane lead by 9 with 4 mins left!

Tulsa basketball came into this week playing well and taking some big wins against Oregon State and Rhode Island. Unfortunately, ending Sunday with a tough loss to Utah. Curious if the team struggled on back-to-back basketball days, the Golden Hurricane ends the week 3-2. Jeriah Horne continues to show out as he returned this year from Colorado, and it seems to have boosted his game. He averaged 19.3 points per game but struggled Sunday against Utah, putting up his worst game of only 10 points. The other star transfer from UT Arlington, Sam Griffin, is also averaging double-digits at 18.0 points per game. This tandem has been excelling in games, but Darien Jackson continues to be the grinder for this team doing all of the dirty work and providing a spark. Tulsa basketball is expecting more out of its big men, especially Rey Idowu, who seems to be struggling. The Golden Hurricanes have a week to recover as its next game is Friday verse Little Rock.

UCF basketball remains perfect, going 4-0 with a solid resume wins against Evansville and Miami. The Knights have a week to recover and will play Saturday against OU. The team has grown and matured. With three players averaging double-digits, the most growth has come from C.J. Walker. After struggling to find his play, he has learned it, and it shows as he is the leading rebounding and averaging 11.0 points per game. Darius Perry has also slid nicely into the point guard role as he knows when to shoot, create shots, and averaging 4.5 assists per game to lead the Knights. UCF basketball can continue to grow as the team has reliable contributors and plays brilliant basketball under Coach Johnny Dawkins.

Suffering a tough loss to Auburn, USF basketball took this team to the closing bell as it fell 58-52 to become 2-2 on the season. The Bulls are looking for someone else to help out Caleb Murphy as the only player averaging double-digits. Russel Tchewa has looked solid as a big man. Javon Green looked solid against this Auburn team. Meanwhile, Tchewa needed to do more. Hoping that this team can find its groove and learn who it is because it has some hope this week as it faces off against Hampton on Wednesday.

After the soft-start for Wichita State basketball, the Shockers got their first real competition in Arizona, Fouling out three players in that game that went to overtime. Come back the next night for the third-place game against UNLV in another battle, Wichita State basketball came to win 74-73 moving to 4-1 on the season. At the start of this week, the Shockers had a sick Tyson Etienne, his first game after recovering against Arizona. Even at that time, Wichita State was being led in scoring by Tyson, averaging 15.3 points per game. Ricky Council and Dexter Dennis are also averaging double-digits. The glaring issue is footwork on the big men.

The expectations of Morris Udeze are becoming noticeable. While Morris has opened his game to include the 3-pointer, he needs to work on his movement, shot selection, and ball handling. Morris is currently averaging 3.5 turnovers which leads the teams. Dexter Dennis even leads Udeze in rebounding. Most of the fan base knew for the Shockers, finally came to fruition in the UNLV game as he started knocking down the 3-pointers. The other issue that popped up in these games was the fast breaks, where the unselfishness sometimes led to empty possessions. The Shockers have a lot of areas to grow in.